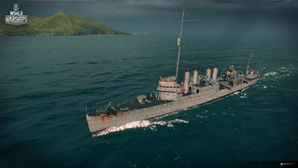 Developed from the Wickes class, Clemson belonged to the second series of the U.S. Navy "flush-deckers". The ship's hull was designed in such a way that the single mounts of the main battery could be replaced by twin mounts in order to double the destroyer's firepower.

As a torpedo boat, the Clemson is a difficult destroyer to play due to its poor, short-ranged torpedoes. While the upgraded torpedoes have an added 1700 damage and 0.5km range, it has an increased reload time of 26 seconds (23.4 with Torpedo Armament Expertise skill), which makes it questionable to upgrade to the Mk 11 torpedoes. The guns are excellent with relatively good shell speed and penetration for 102mm guns. However, its range is relatively short, much like a Japanese destroyer at 8.6km. Additionally, it has a relatively high detectability of 7km, slightly worse than its tier 5 counterpart and much worse than the Isokaze. However, it does have good rudder shift time, allowing for short-notice dodging. Its 2x3 torpedoes per side allow it to launch waves of torpedoes and keep the enemy at arm's length. In summary, it is a solid US destroyer, featuring good shell speed and maneuverability despite the below-average torpedoes.

If you don't want the torpedoes due to the reload time, quickly go for the B hull to get the guns. While it is a +1 to artillery, you actually effectively double your firepower (each turret has one added gun).

If you want the torpedoes first, then quickly research them and the guns last.

The Clemson class were a series of 156 destroyers that were built between 1919 and 1922. They were a minor redesign of the previous Wickes class with the primary change being an increase in fuel capacity. The only ships of the class to receive the twin 102mm/50 turrets were the USS Hovey and USS Long. Twenty ships were lost in action; no examples survive today.