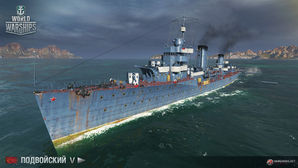 As a Tier V VMF destroyer with access to three upgrade slots, the following upgrades are recommended for Podvoisky:

As a Tier V VMF destroyer, Podvoisky has access to the following standard destroyer consumables:

It is highly recommended to at least mount the premium Engine Boost II consumable to better effectively utilize Podvoisky's speed, as it has a fantastic base speed of 42 kts and is easily the fastest ship at Tier V.

Type 1, 2, or 5 camouflage can be equipped for credits; Types 1 or 5 are recommended at a minimum to reduce the accuracy of incoming shells.

Players who wish to spend doubloons for faster XP gain can choose to equip the Type 6 camouflage, which gives a huge XP bonus to the player per battle.

It is highly recommended to at least mount the Sierra Mike signal to boost Podvoisky's base speed to 44.1 kts, which then combined with Engine Boost consumable can push the ship up to a max of 47.6 kts. Additionally, Victor Lima, India X-Ray, and Juliet Charlie are recommended to increase fire chance (+3% chance when combined with Demolition Expert skill) as well as to protect the player from being detonated. Furthermore, as the ship is very fast for Tier V, the player may find themselves charging an enemy battleship and have to ram the enemy ship, in which Hotel Yankee signal can be very useful. Equal Speed Charlie London, Zulu Hotel, and Dragon Flag will help boost the player's XP gain per battle and speed up their commander (re)training.

The draft design of a "40-knot destroyer" was developed in 1929 and was one of the steps towards building the first Soviet destroyer leader. In the late 1920s, the USSR Navy was in dire need of modern warships, but due to the slow restoration of the shipbuilding industry and insufficient funding, the naval command limited the development of ship projects. The process of designing a "large destroyer", capable of acting as a cruiser, began in 1921, when its key specifications were defined for the first time—130-mm artillery and a maximum speed of 40 knots. In May 1928, having analyzed the engineering groundwork and considering the performance characteristics of other nations’ destroyers, the Soviet Navy Command ordered the development of a draft project for new destroyers. These new vessels were to be armed with four to five 130mm guns, two to three 533mm torpedo launchers, anti-aircraft capabilities, and a maximum speed of 40 knots. The Black Sea fleet needed warships most of all, which predefined the theater of operation for the new destroyers.

The development process of the "40-knot destroyer" was led by Yulian Shimansky, an experienced shipbuilding engineer. By the autumn of 1929, the draft project was ready. It was decided that this ship would be the first of the new type for the Soviet Navy, a destroyer leader. The total displacement was 2,100 tons; the maximum speed was projected at 42 knots. Artillery armament consisted of five 130mm guns, analogous to those installed on the light cruiser Profintern (formerly Svietlana). The main armament was to be supplemented by four 37mm antiaircraft automatic guns, which were undergoing trials at that time, and several 12.7mm machine-guns. The torpedo armament consisted of the two newest 533mm triple torpedo launchers, which the Soviet Navy had not begun to use at that time. Discussion of the project, its thorough study, and changes made to it according to the development of world shipbuilding and field experience of the Soviet fleet, led to the creation of Project 1 destroyer leaders. The first ship of this class, Leningrad, was laid down in 1932.