Black is only available by reaching Rank 1 in five (5) separate seasons of Ranked Battles.

Black is very similar to her tech tree counterpart Fletcher, with the main differences being her torpedoes and the availability of the Radar consumable. Black is unique among destroyers in that she can equip radar. This radar is weaker than other radars in high tier, featuring a 7.5km range and a 20 sec active time. This radar still makes Black a fearsome cap fighter, able to see through smoke to spot for her team and continue damaging enemy DD's. The other major difference is the torpedoes. Black's torpedoes feature a a 13.7km range and rated for 21600 damage, but travel at the slow speed of 43 knots. These torpedoes are more for area denial, as one cannot really lead targets with them, as they take longer to reach their max range than they do to reload.

Like the Tier IX USN destroyer Fletcher, Black has standard consumables of Damage Control Party, Smoke Generator, and Defensive AA Fire. But unlike Fletcher and like Missouri, it is a Tier IX USN premium ship with access to the Surveillance Radar consumable. However, this Surveillance Radar occupies the same slot as Smoke Generator and Defensive Fire consumables, only has a range of 7.5km and lasts only 20 seconds. Thus:

As a Tier IX premium ship, Black comes included with Type 10 camouflage that lowers her detection radius, reduces the accuracy of incoming shells, and increases the amount of experience she earns. This Type 10 camouflage provides a 100% bonus to experience earned in battle, not the usual 50%. 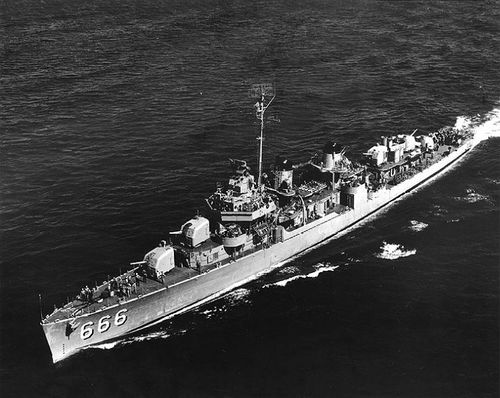 The Fletcher-class ships were the first destroyers in the US Navy to exceed 2,000 tons displacement. In a change from previous design practice, Fletchers had flush decks as opposed to the raised forecastle design seen on the Benson class. This increased her length but decreased her freeboard and improved her handling; overall, this was considered a very structurally sound and seaworthy design. Additionally —unique to Fletcher-class ships built later in World War II (such as USS Black) — the superstructure design was altered: it was of a lower height with a flat-face and bridge, as opposed to the traditional rounded-tower design.

As required by US Navy specifications, each Fletcher class ship was able to mount five (5) 5-inch guns in single, enclosed dual-purpose mounts; two guns forward, two guns rear, and one amidships. All turrets were controlled by Mark 37 and Mark 22 Fire Directors. Feeding information to the gun computer, the main battery could all be remotely controlled if required. Furthermore, the class got to implement SG surface radar and "Variable-Time" proximity fuses — both novelties to the Navy — that allowed effective engagement of both surface and air threats.

Learning from the experience of Pearl Harbor, the Navy decided to invest in heavier anti-aircraft armament. After seeing their effectiveness during the Spanish Civil War, the Navy's Bureau of Ordnance (BuOrd) arranged manufacturing licences for Oerlikon 20mm and Bofors 40mm cannons. Anti-aircraft armament was constantly being changed throughout the war; the aforementioned USS Black, for instance, was armed with four (4) 20mm and four (4) 40mm AA guns for most of her time in the Pacific.

Finally, the class was able to mount ten (10) torpedoes in two quintuple-tube launchers amidships, the heaviest torpedo broadside of any US Navy destroyer at the time. By also carrying depth charge launchers in conjunction with anti-submarine sonar, Fletchers were well-equipped to conduct anti-submarine operations as well. Overall, the class was armed with a plethora of tools to combat a myriad of threats.

In the end, 175 Fletchers were produced from 11 different shipyards throughout the United States.

USS Black (DD-666) was the 138th Fletcher-class destroyer to be produced, named after Lieutenant Commander Hugh D. Black. Commander Black was killed in action as a result of the loss of USS Jacob Jones (DD-130, a Wickes-class destroyer) to a German U-boat off the New Jersey coast in 1942. With the sponsorship of Mrs. Black, Federal Shipbuilding and Dry Dock Co. in Kearny, New Jersey built the namesake destroyer and launched her on 28 March 1943.