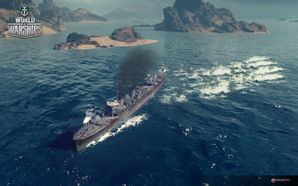 Developed from the Minekaze class, equipped with a reinforced torpedo armament. This class inherited high speed and sufficiently powerful artillery from its predecessors. Greater dimensions made it possible to equip these destroyers with 610 mm torpedoes.

In her previous incarnation at Tier VI, players sometimes referred to Mutsuki as "Mutsucky", because when it came to every category critical to the strengths of mid-tier Japanese destroyers — torpedo reload time, maximum speed, detection range, torpedo launcher layout, etc. — it was basically a downgrade from Minekaze. With Update 0.5.15, Mutsuki drops a tier and is now considered a contemporary of Minekaze, a spot that is not only more befitting from a a historical perspective, but also from the perspective of her in-game capabilities and armament.

Much like Minekaze, Mutsuki is heavily reliant on her torpedoes to perform well. However, she does suffer from quite a long reload time (well over a minute). Mutsuki features two triple-tube torpedo mounts; with a surface detection range of 6.2 km (without camouflage) and a torpedo range of 8km, she can remain undetected whilst unleashing torpedo hell on the enemy. This is the recommended way to play her, as her poor armor coupled with mediocre gun performance means she will not last long in a gun duel with anything besides another Japanese destroyer. Stay away from enemy ships — at least 7 km — and only fire her guns in self-defense if she's already detected.

While slower than Minekaze, Mutsuki still features the fantastic detection and torpedo ranges that make the mid-tier Japanese destroyers so devastating, though she will have a hard time running away if she's spotted. Mutsuki’s anti-aircraft armament looks so-so on paper, but isn't really a threat to enemy planes; luckily, her air detection range goes down to 3.1 km.

Mutsuki is a different kind of challenge than Minekaze, but both ships require patience, good positioning, and excellent map awareness. Learning those skills now in the middle tiers will benefit Japanese destroyer captains the rest of the way.

With the recent Japanese destroyer line changes, upgrading Mutsuki is fairly simple: pick up Hull (B) first, then the upgraded guns, followed by the upgraded range for those guns. Then move on to Fubuki.

Type 1, 2, or 5 camouflage can be equipped for credits; Types 1 or 5 are recommended at a minimum to reduce the detection range.

Mutsuki has fairly decent speed for her tier and vs her peers, so Sierra Mike is not really necessary. Additionally, because she is an Japanese destroyer with only two sets of torpedo launchers and only two guns, Victor Lima, India X-Ray, and Juliet Whiskey Unaone are not worthwhile investments. However, if captains wish to speed through their XP grind on Mutsuki, they can equip Equal Speed Charlie London and Zulu Hotel (for commander experience). 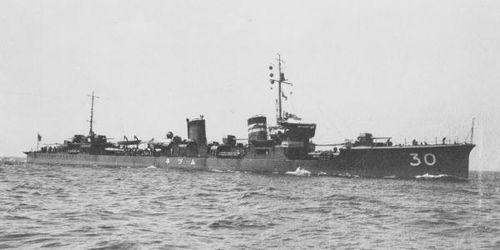 The Mutsuki class (睦月) destroyers were based on the same hull design as the previous Kamikaze-class, except with a double curvature configuration of the bow, a feature which became a standard in all later Japanese destroyers.

The Mutsuki class was the first to be fitted with the newly developed 24 inch torpedoes, with greater range and larger warhead than previous torpedoes in the Japanese inventory. Originally Type 8 torpedoes were carried, arranged in two triple mountings. These were later replaced with the famous Type 93 "Long Lance" oxygen-propelled torpedoes during World War II.

In September 1935, many ships in the navy were severely damaged by a typhoon while on training exercises, in what was later termed the "Fourth Fleet Incident", including a number of the Mutsuki class destroyers, which had several plates buckled and bridges wrecked. During 1936-37 the Mutsuki class ships were retrofitted with a strengthened, more compact, bridge, with redesigned watertight shields on the torpedo mounts. With the new shields the torpedoes could be worked in all weather conditions thus extending the useful life of the class.

From 1941-1942 the Mutsuki class destroyers were refitted with the 120 mm/45 main guns reduced to two single mounts and ten Type 96 25 mm AT/AA Guns added. The minesweeping and minelaying equipment was removed and replaced with four depth charge launchers, with 36 depth charges.

In June 1944, the surviving vessels were again refit, with the number of Type 96 25 mm antiaircraft guns increased to twenty, and an additional five Type 93 13 mm AA Guns also installed.

Like the Minekaze class, the Mutsuki class destroyers were mostly outdated and obsolete by the beginning of World War II. However, the Mutsuki class destroyers engaged in far more active combat service than their predecessors, participating in operations from the invasion of Wake Island, the conquest of the Netherlands East Indies, to the South Pacific, and operations in the Philippines.

Fumizuki participated in the initial invasions of the Netherlands East Indies as a convoy escort for the invasion forces, remaining until she sustained heavy damage in a collision with a transport in September 1942. Repaired, she was then assigned to the South Pacific and evacuated troops from Guadalcanal in February 1943. Fumizuki would spend much of the remaining six months transporting troops in the Solomons until she was recalled to Japan for refit in August, 1943. Returning again to the Solomons, she would continue to perform troop transport duties until she was sunk in Rabaul harbor by air attack in February 1944.

Kikuzuki performed convoy escort and patrol duties in the South Pacific until May, 1942. She was torpedoed during an air attack on May 4, 1942 and sank the next day.

Kisaragi was assigned to the Wake Island invasion force, departing Truk on 8 December 1941. On 11 December she was hit by a bomb during an air attack and was sunk with all her crew.

Mikazuki was initially assigned to the Hosho training group, but would serve on ASW patrols and as a convoy escort on the Formosa-Japan routes from June 1942 until an extended refit in December 1942. In June 1943, she transferred to Rabaul and began troop transport runs in the Solomons. Mikazuki grounded on a reef off Cape Gloucester and was destroyed by air attack on 28 July 1943.

Mochizuki participated in the invasion of Wake Island in December 1941, then began ASW and convoy escort duties until January, 1942, when she was moved to the South Pacific. Present for the Battle of the Coral Sea in May, Mochizuki continued to operate in the Solomons, participating in the bombardment of Henderson Field on Guadalcanal on the night of 14-15th October, 1942. She would then transport troops to islands throughout the Solomon Islands until she was lightly damaged in the Battle of Kula Gulf on the night of 5-6 July 1943. Mochizuki was sunk by air attack on 24 October 1944, while transporting troops and supplies to New Britain.

Minazuki would participate in the invasions of the Philippines and Java, remaining in the Southwest Area for all of 1942, after which she returned to Japan for refit. Joining the Thrid Fleet at Rabaul in February 1943, Minazuki engaged in a remarkably busy series of troop transport missions until May 1944, when she was reassigned to the Central Pacific. She was torpedoed and sunk by submarine on the 6th of June, 1944.

Mutsuki was assigned to the invasion fleet tasked with taking Wake Island in December 1941. She would then operate in the Solomon and Bismarck Islands, escorting convoys as Japan established airfields on various islands in the South Pacific. Assigned to escort a troop convoy to Guadalcanal during the Battle of the Eastern Solomons, Mutsuki was sunk by air attack on 25 August 1942.

Nagatsuki was present for both the Philippine and Java invasions from December 1941 to February of 1942, after which she remained in the Southwest Area performing ASW patrols and convoy escort until December 1942. Transferred to the South Pacific in January 1943, Nagatsuki participated in the evacuation of Guadalcanal and transported troops to islands in the Solomons chain until the night of 5-6 July 1943 and the Battle of Kula Gulf. Hit by a single 152mm shell, Nagatsuki was sunk the following day by air attack.

Satsuki was assigned as part of the escort force for the Philippine and Java invasion convoys from December 1941 to February 1942, after which she remained in the Southwest Area conducting ASW patrols and convoy escort missions until December 1942. Assigned to the South Pacific in January 1943, Satsuki participated in the evacuation of Guadalcanal and transported troops throughout the Solomon Islands until May 1944 when she was transferred to the Central Pacific. On 21 September 1944, Satsuki was bombed and sunk outside Manila during the raid by Task Force 38 on the Philippine Islands.

Uzuki was assigned to the Guam invasion force in December 1941, and then transferred to the South Pacific in January of 1942. There she served as an escort for troop convoys to the various islands in the Solomons until March 1944, when she began to escort convoys in the Central Pacific. Uzuki was present for the Battle of the Philippine Sea, but not engaged. By August, she was operating as a convoy escort in the Southwest Area and the Philippines. Uzuki was torpedoed by a PT boat and sunk on 12 December 1944, while escorting a troop convoy attempting to reinforce Leyte Island.

Yayoi also participated in the invasion of Wake Island, then proceeded to the Solomons for the invasion of Rabaul in January 1942. She then assisted in the transport of garrisons to the various islands in the Solomons chain. In August and September 1942, Yayoi transported and subsequently evacuated troops from Milne Bay in New Guinea. On the 11 September 1942, Yayoi was attacked by air and sunk while transporting troops to Goodenough Island off New Guinea.

Yuzuki began the war by participating in the invasion of Guam in December, 1941, then moved to the South Pacific. During 1942, she escorted numerous invasion convoys throughout the Bismarck and Solomon Islands as well as New Guinea, continuing in support of operations in the South Pacific into 1944. Assigned to the Central Pacific in May 1944, Yuzuki was sunk by aircraft on 12 December 1944, while escorting a troop convoy to Leyte.