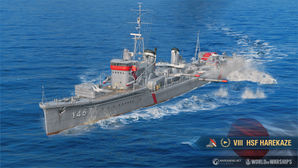 The base hull mounts the standard Japanese twin 127mm turret found on normal Kagero-class destroyers; with this hull equipped, Harekaze plays identically to Kagero. The second hull mounts three of the twin 100mm dual-purpose turrets found as main battery weapons on the Akizuki-class destroyers. Those who enjoy Akizuki’s guns will find Harekaze comfortable to play in this configuration; though she mounts one less gun turret than Akizuki, Harekaze makes up for it by bringing another torpedo launcher to the battle, as well as packing a higher top speed and better handling characteristics. The dual-purpose guns also make her a respectable anti-aircraft platform if points are invested in the right commander skills and certain modules are equipped.

Upgrade Slot 2 provides options for specialization in certain roles, benefitting each of the separate hull options for HSF Harekaze.

For the first hull option with 127 mm/50 3rd year type main guns, Main Battery Modification 2 is the recommended upgrade to increase the sluggish 180-degree turret traverse time of 30 seconds. Mounting this upgrade will increase reload time of the main guns from 6.3 seconds to 6.7 seconds.

For the second hull option with 100 mm/65 Type98 main guns, AA Guns Modification 2 is the recommended upgrade to specialize in anti-aircraft duties. This upgrade increases the anti-aircraft firing range by 20%.

For the third hull option with 127 mm/54 Mk39 main guns, Aiming Systems Modification 1 is the recommended upgrade. Maximum dispersion is reduced to 93 meters, and torpedo tube traverse speed is increased. 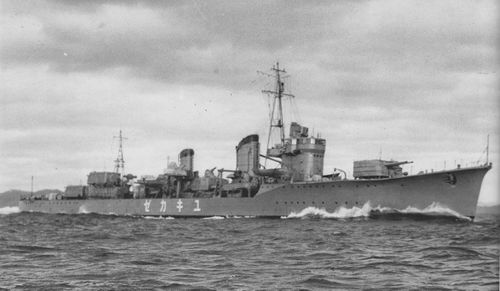