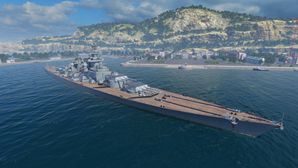 Sharing the name with one of the Kaiser's sister ships, Großer Kurfürst (translation: Great Elector from the title of Frederick William, Elector of Brandenburg as he was called "The Great Elector") is the newcomer to the tier X battleship scene. Shortened to "GK" or simply the "Kurfurst", she will live up to her name as "the great elector" as she breaks the long standing stalemate of Yamato and Montana by simply entering into the fray. Subtlety is not this battleship's forte because she is detected from quite a fair distance, the furthest of all 3 of the Tier X battleships.

Due to her size she possesses an effective array of secondaries along with two pairs of guns -- the same caliber as her predecessor Friedriche der Große -- but with triple mounts with the same AB-XY configuration. Even Montana, who shares the same triple mount turret style and layout, will respect her for her heavy broadside, while the responsive turret traverse (already the best Battleship traverse at Tier X) can be made even faster with upgrades. Even more she can surpass the US battleship through barrel diameter with her last gun upgrade being 420mm barrels still mounted in four triple turrets while still retaining the excellent traverse speed. In addition her bustling secondary batteries ensure that any enemy getting close enough for the guns to unload will be constantly whittled down, dealing heavy damage over time or outright destroying low health ships that get too close.

Her AA is fairly typical of other German battleships, with an adequate long range punch that sadly does not follow through as planes come closer to the ship herself. Planes that make it past the long range armament will have no trouble hitting her due to her large size and abysmal turning circle. Her armor is also typical of German Battleship design, with a turtleback armor scheme that will make citadeling her at close range near impossible. Her deck armor is also quite substantial at 50mm along the center meaning that long range plunging fire from low caliber guns will have difficulty penetrating her. With her large hit point pool (the most in the game at 105k) she will be able to weather a large amount of armor piercing rounds and keep on fighting. As per standard for German battleships starting from Bismarck, the Kurfurst is equipped with the hydroacoustic search radar to help detect incoming threats such as torpedoes and destroyers attempting to get close or vessels hiding in smoke screens.

However, despite her impressive offensive and defensive assets, much of it is a double edged sword, helping and harming depending on the situation. Both of her guns are rather inaccurate at long range, becoming deadly only once they pass the mid range for Battleships of ~11km. Her 406mm guns have a better reload rate than Montana (28 seconds), but lack the Montana's superheavy AP shells which hampers her penetration at range while also lowering her damage compared to Montana. Her 420mm guns are not large enough to overmatch the 32mm bow armor most ships have at Tier X, and while they make the damage equal the Montana's they increase her reload time to 32 seconds per salvo. Additionally her armor is not unbreakable as it may seem. At long ranges her deck armor is still not sufficient to stop plunging fire from other battleships from penetrating, meaning her citadel is relatively easy to penetrate at a considerable distance. Also the armor belt is actually the thinnest overall, topping at 380mm compared to Montana's 409mm and Yamato's 410mm. This means when broadside on she is more likely to take regular penetrating hits from AP shells, thus allowing heavy broadside ships like Montana or Amagi to deal considerable damage with regular Penetrations of their AP shells.

Finally, her size also betrays her as she is remarkably easy to hit and has THE largest turn radius out of all the tier X battleships at over a kilometer. While her rudder shift time is lower than either Montana or Yamato she is so long that she takes a while to actually begin responding to turns. Even with the Hydro Acoustic Search, expect to sustain heavy damage when torpedoes are inevitably being sent at her if she is not already responding. Fire and flooding are also a concern, since they deal damage based on a percentage of maximum hit points, causing her massive health pool to work against her when volley's of HE start fires and torpedoes cause flooding.

When you go out in the Kurfurst, expect to sustain a load of heavy damage from all sources as you are large and easily visible from range, because you can do the same to the enemy fleet if allowed to close the distance. Play to her strengths: she is not a sniping battleship, and belongs up close and personal where her peers have difficulty countering her armor scheme, large secondary battery, the rapid traverse of her guns.

You only need to unlock the 420mm guns

Players who wish to spend doubloons can equip Großer Kurfürst with Type 20 camouflage that lowers her detection radius and the cost for her post-battle service, reduces the accuracy of incoming shells, and increases the amount of experience and credits she earns.

As a Tier X battleship, it is recommended to mount the following signals on Großer Kurfürst: Equal Speed Charlie London, Zulu Hotel, Dragon Flag (all for faster captain training), India Bravo Terrathree (to further reduce service costs if you so wish), India Delta (to recover more HP, as she is very susceptible to fire damage), India Yankee (to reduce fire damage taken), Zulu (if you wish to take more credits), Mike Yankee Soxisix (for better secondaries), and November Foxtrot (for faster cooldowns on the abilities).

Bomb damage sustained by Scharnhorst in July 1941 provided the impetus for the effort to increase the horizontal protection for the H-class. The designers were confronted with a significant problem: any increase in armor could correspondingly increase the displacement and more importantly, the draft. It was necessary to maintain the full-load draft of 11.5 m of the H-39 design for operations in the relatively shallow North Sea. The only option that allowed the displacement to be maintained while armor thicknesses to be increased was to reduce the ships' fuel supplies. A 25 percent cut in range was required, which was deemed unacceptable by the OKM. It was eventually determined that since deep-water anchorages on the Atlantic coast were available, it would be permissible to allow the draft to increase. The initial redesign called for an increase of only 5,000 long tons (5,100 t), 40 percent of which was additional deck armor, the remainder being used for a larger-caliber main battery.

One of the most significant changes was the decision to bore out the over-sized 40.6 cm guns to 42 cm caliber for the H-41 design. The design staff determined that modifications to the ammunition hoists and loading equipment would be easily effected and that the original turrets could be retained. The OKM was aware that the British had settled on a 40.6 cm gun for the proposed Lion class; the 42 cm gun would grant the H-41 design a significant advantage over these new adversaries. The ships' armament was otherwise unchanged, apart from an increased number of 2 cm anti-aircraft guns, of which there were now to be 34.

The ships' main armor decks were substantially strengthened: the deck was increased in thickness from 120 mm (4.7 in) to 200 mm (7.9 in) and the sloped armor at the edges was thickened from 150 mm (5.9 in) to 175 mm (6.9 in). Wartime experience with the Scharnhorst class indicated that the torpedo-defense system was insufficiently strong to protect the H-39 design from underwater damage. Beam was therefore increased, with greater width added at the ends of the armored citadel to allow a greater distance between the side wall and the torpedo bulkhead. The stern section of the torpedo bulkhead was also strengthened structurally to allow it to better contain the force of an underwater explosion. A triple bottom was also included in the design, the first time a feature was used in a German warship design. The loss of Bismarck in May 1941 also influenced the design; two large skegs were added to the outboard shafts to protect them and increase support for the stern while in drydock. The rudder system was also designed with an explosive charge to detach the rudders in the event they became jammed.

The finalized design was approved by Admiral Raeder on 15 November 1941. The new design measured 282 m (925 ft) long at the waterline, had a beam of 39 m (128 ft), and a draft of up to 12.2 m (40 ft) at full load. The increase in weight, while engine power remained constant, reduced speed to 28.8 kn (53.3 km/h; 33.1 mph). The OKM planned to begin construction six to nine months after demobilization, initially at Blohm & Voss and the Deutsche Werke shipyard in Kiel. Deschimag, which had been awarded the contract for "J", could no longer be used due to the increase in draft, which precluded travel through the shallow Weser. Following the completion of a new, larger dock at the Kriegsmarinewerft in Wilhelmshaven, work would also be done there. The increased size of the ships would have lengthened the building time from four to five years.