USA | SPG | Tier V
Battle Tier
1234567891011
Overview
Mouse over "
▲
Well, the ones further down, of course.
" for more information
[Client Values; Actual values in
▲
Specifically, the mismatch in crew values caused by commander's 10% crew skill bonus. Outside of a crew of 1 commander only, 100% crew is a fiction. The client values, given for 100% crew, will normally be taken into battle with 110% crew skill members aside from specific functions, causing their actual performance to deviate from the expected client value. These differences are taken into account in tooltip boxes.
]
Crew
Mobility
Armor
Armament
General
Values are Stock - click for TopValues are Top - click for Stock
M8A1
M41 HMC
M44

The M41 HMC is an American tier 5 self-propelled gun.

Light SPG on the M24 chassis saw service in the U.S. Army until the mid 1950s. Some vehicles were supplied to France. According to various sources, about 85–250 SPGs were manufactured.

After its rebalance to tier V, the M41 will feel right at home in any match that it gets placed, as its 155mm howitzer is capable of dealing apocalyptic damage to any tank it gets to encounter and effective range that spans from one corner to a map to much of the other. However, mind that the shell travel time is slower than other Tier 5 SPGs. Players coming fresh from the M37 will never have to worry about poking higher-tier enemies for insignificant damage.

After the nerfs and removal of many of its engines, the M41 does not accelerate as well as it used to. However, its 15HP/ton ratio when upgraded and its high speed limit coupled with low weight allows it to outrun heavier tanks in contingencies. 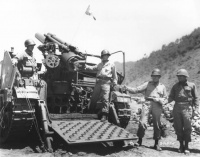 USA
Self-Propelled Guns
ja:Tank:A18 M41
Retrieved from "http://wiki.wargaming.net/en/index.php?title=Tank:A18_M41&oldid=237365"
Categories:
Your location:
To log in, select the region where your account is registered
CIS Europe North America Asia
Or use Microsoft Login to enter WoT XBOX ecosystem
Log in