Despite the fact that it is considered a fragile tank, it has still a strongpoint on its armor; the gun mantlet. Covering the majority of its turret face, tall height plus the E8's amazing gun depression makes hull-down positions useful. Of all the Tier 6 flanking mediums, it has the best armor. From the front, it is able to withstand low-tier autocannon, absorb direct hits from large-caliber high-explosive shells and if hull-down, medium tank cannon if they strike the large mantlet. Despite the resilience of the armor, it is no Sherman Jumbo and should always be treated as a medium tank.

Its biggest asset and crippling flaw is its gun; the 76mm Gun M1A2 has excellent DPM, a very fast aim time, and good dispersion multipliers by tier 6 standards, and can be augmented by Gun Rammers and Vertical Stabilizers to make the M4A3E8 a formidable flanker. However, it achieves its excellent DPM through its rate of fire; it's DPS of 115 is the lowest for any top gun on any vehicle, tied with the Sherman Jumbo which employs the same selection of guns. Furthermore, with an AP penetration of 128mm, it is the lowest on any Tier 6 medium tank. Because of its low DPS and AP penetration combined with poorer armor, many players consider the Jumbo a better vehicle due to its armor. But the Easy Eight was never a particularly easy tank to play; in the hands of a skilled player, it will easily out-flank the clumsier opponent.

If flanking is not an option, then sniping is entirely possible. However, the middling accuracy, low penetration and low alpha damage tend to reduce its role. Still, passive scouting is possible, with its 370 meter view range.

Compared to the Cromwell, this tank suffers from a high profile, lower damage per shot with the top guns, lower penetration, slower top speed, worse acceleration and inferior turret traverse. However, the Easy Eight has substantially better protection, slightly better HP, better hull traverse, superior view range, and significantly better gun depression and elevation. Gun handling is also vastly superior to the Cromwell, especially with Vertical Stabilizer mounted. Although the M4A3E8 is arguably less flexible, it often has the advantage in an individual duel against its less stable and more poorly armored British competitor.

While the 76mm M1A1 and M1A2 may only seem to differ in rate of fire, it is important to note that the M1A2 is much more accurate than the M1A1, which can make all the difference in this tank's role of providing support for better armored vehicles. Adding the vertical stabilizer makes the M4A3E8 with a 76mm Gun M1A2 a formidable opponent in close combat as well. By circling the enemy, the E8 is more than capable of devastating higher tier tanks with the high rate of fire. The devastation is even more prevalent if the gunner has a Deadeye perk, dealing ridiculous damage to any modules it will hit. A wolf-pack of E8s can be a devastating force on the battlefield. 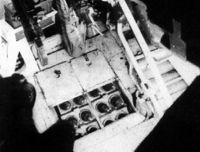 The M4A3E8 is depicted in World of Tanks with T80 double-pin tracks. The original T66 single-pin tracks is only represented by the premium M4A3E8 Thunderbolt VII.
click to read more...