Homepage/
World of Tanks/
Emil I

Sweden | Heavy Tank | Tier VIII
Battle Tier
1234567891011
Overview
Mouse over "
▲
Well, the ones further down, of course.
" for more information
[Client Values; Actual values in
▲
Specifically, the mismatch in crew values caused by commander's 10% crew skill bonus. Outside of a crew of 1 commander only, 100% crew is a fiction. The client values, given for 100% crew, will normally be taken into battle with 110% crew skill members aside from specific functions, causing their actual performance to deviate from the expected client value. These differences are taken into account in tooltip boxes.
]
Crew
Mobility
Armor
Armament
General
Values are Stock - click for TopValues are Top - click for Stock
Leo
Emil I
Emil II

The Emil I is a Swedish tier 8 heavy tank.

A variant of the heavy tank developed for the Swedish army under the EMIL project in the 1950s. Design solutions used for the French AMX 13 tank influenced the project, which is obvious from the design of the turret. In 1951, a draft design was prepared, but development was discontinued in favor of later versions.

The Emil I leads to the Emil II.

The Emil 1 is a combination of strong ridge-line armour and a burst autoloader, the complete opposite of the AMX 50 100 and more akin to the T69's play style. The armour on flat ground is adequate against tier 8's and lower but especially when facing higher tiered tanks you always want to go somewhere where you can put your unique 12 degrees of gun depression and unhistorically thick armour to good auto ricochet angles. Take note that the armour can still be penetrated by tier X guns especially with premium shells so do not play as though you are invincible. Using ridge-lines also does well to hide your 20mm side armour which is easily over matched by most guns you will face through World of Tank's three calibre rules. If you ever find a hull down Emil that you cannot penetrate, do not be afraid to fire HE as the gun mantle sides are very thin. The stock gun using AP ammo is pretty much worthless against tier 9-10 armor and struggles against T8 frontally, even against weak spots. As especially the stock Emil severely lacks mobility engaging enemies from good angles and doing damage even on a ridge line can be challenging. It may be worth considering premium ammo, which will kill your credit earnings or to load up with HE and at least do some damage. With the increased chance to do some module damage. Once you get the best gun, you can start doing decent damage against upper tiers with AP ammo and make good earnings.

The requirements for the proposal made it clear that the vehicle was to be able to function as both an infantry support weapon and a tank destroyer. To make this possible, the tank was to mount a 12cm autoloaded gun. This would allow the tank to fire rapidly, it would give it good high-explosive round performance and better performance with HEAT rounds. There were also considerations for subcalibre rounds, but the main ammo types considered were the HEAT and the HE rounds. The idea of a tank sharing the medium and anti-tank roles had been considered before, but only now was such a vehicle possible within the weight limit, set by the Swedish army due to strategic mobility. The use of an autoloader made it possible to reduce the crew of the tank to 3. The requirements also made it clear that the new tank would need a lot more armour than previous Swedish projects. The main worry was the appearance of the Soviet IS-3 and its 122mm gun. To keep the weight down, the heavier armour of the tank was put on the turret front, here it reached a maximum thickness of 200mm at the gun-mantle (with 150mm and 125mm sloped armour at the rest of the turret front).

This thick front turret armour was made possible by the use of a protective frontal “shield” instead of the French oscillating turrets, which had the turret split into the upper and the lower section. This also allowed for much better gun depression, that reached a maximum of 14dg. However, the rest of the turret armour was pretty weak with 35mm and 20mm side and rear armour respectively. The hull armour was a bit more interesting. The front had 120mm of armour – but only on the lower plate, the upper plate was better sloped, but only reached 70mm. The greater thickness of the lower plate would also be kept in future revisions of the EMIL project. The rest of the hull armour was really weak with only 20mm side and 30mm rear armour. 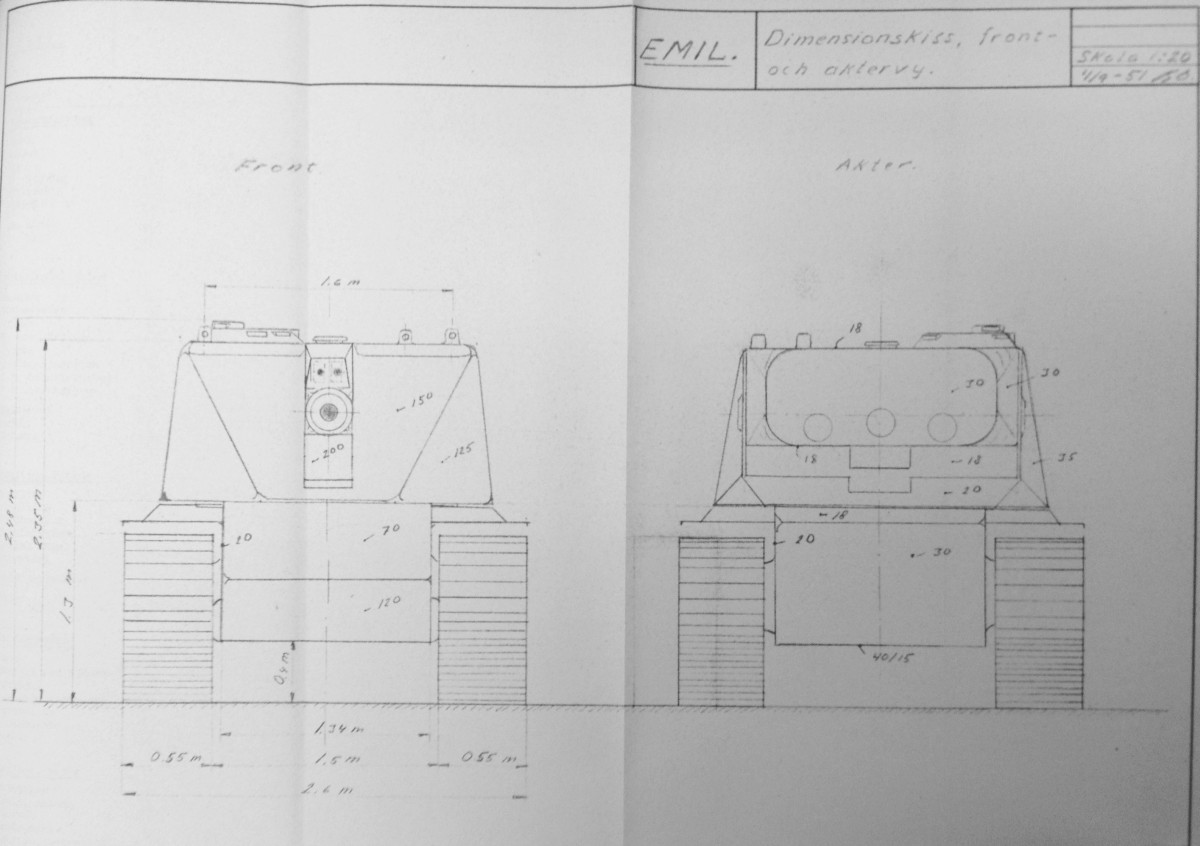 Perhaps the most interesting thing about the projected tank was its size. The height was only 2,35m, which meant it had lower profile than tanks like the T-44 or IS-3. All in all, the tank was only slightly bigger than the previously projected light tank. This in turn meant that the tank only weighed 28 tons. However, later studies concluded that a vehicle of the performance described in the 1951 proposal would most likely weigh at least 32 tons. The main reason for the small size and low weight was the Swedish military believing that the mobility of a vehicle heavier than 30 tons would be very limited in Swedish terrain. The tank was to be powered by a 550hp air-cooled boxer engine built by Svenska Flygmotor AB, a producer of aircraft engines. This would allow the power to weight ratio of 19,5 hp/t for the 28 ton tank, but with the projected 32 ton weight this would be closer to 17hp/t. The good power to weight ratio also allowed the top speed of 55kph. 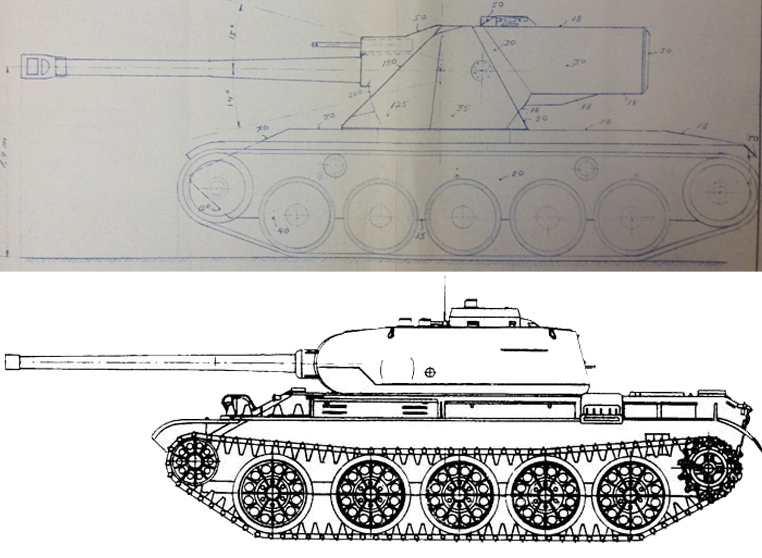 The suspension of the vehicle was based on the Lvkv 42 self-propelled anti-aircraft gun, developed by Bofors. This meant that the tank would have hydraulic springs, that would later be used on the S-tank. Other alternatives were also considered however, such as an interleaved suspension. The hull of the tank was designed by Landsverk, who had been the main Swedish tank manufacturer since the 30′s and the turret was designed by Bofors, who had plenty of experience with guns and turrets for ships and coastal defence, but little experience with turrets for actual tanks. The project would continue in 1952, when the fear of the IS-3 would turn the EMIL project into more of a heavy tank project.
click to read more...

* The tier 8 Emil as represented in the game is based on the 1951 proposal for a new Swedish 30-tonne tank which had the project name EMIL. Note that nowhere in the original documents is this initial design referred to as Emil 1, instead, it is simply listed as “EMIL”. The name Emil 1 was later used in 1952 for a completely redesigned version of the tank which was a scaled down version of the Emil 2 that you see in game. This Emil 1 had several different armour proposals, none of which are as thick as the in-game Emil 1.
click to read more...

Sweden
Heavy Tanks
ja:Tank:S18 EMIL 1951 E1
Retrieved from "http://wiki.wargaming.net/en/index.php?title=Tank:S18_EMIL_1951_E1&oldid=285738"
Categories:
Your location:
To log in, select the region where your account is registered
CIS Europe North America Asia
Or use Microsoft Login to enter WoT XBOX ecosystem
Log in