France | Heavy Tank | Tier VIII
Battle Tier
1234567891011
Overview
Mouse over "
▲
Well, the ones further down, of course.
" for more information
[Client Values; Actual values in
▲
Specifically, the mismatch in crew values caused by commander's 10% crew skill bonus. Outside of a crew of 1 commander only, 100% crew is a fiction. The client values, given for 100% crew, will normally be taken into battle with 110% crew skill members aside from specific functions, causing their actual performance to deviate from the expected client value. These differences are taken into account in tooltip boxes.
]
Crew
Mobility
Armor
Armament
General
Values are Stock - click for TopValues are Top - click for Stock
AMX M4 mle. 49

A heavy tank that was originally known as Project 141. Since France needed modern heavy tanks, development started immediately after World War II. Existed only in blueprints.

The AMX M4 mle. 49 is French tier 8 premium heavy tank. It notably differs from majority of French tanks for having impressive amount of frontal armor, but is notably less mobile than AMX 50-serie heavies or FCM 50T, while also lacking autoloader of formers. Like pretty much every French tank, M4 49 has very poor side armor, so its expectionally vulnerable to flanking.

The AMX M4 mle. 49 is an interesting tank in the sense that it now shares the match-making with vehicles that are outright superior to it. The tank suffers at the hands of any non-city or non-urban environments. The benefits of the tank shine in places that are eerily similar to other vehicles, premium or not, like heavy tanks of yesterday (relatively thick and boxy armor). Concerning the gun, armor effectiveness, mobility, they all will be touched on here, as well as some more troubling downsides.

Firstly, the gun is rather mediocre. In fact, it is extremely poor at sniping and snap-shotting. In urban environments, fully-aimed shots to the sides and front of vehicles can miss wildly. The dispersion of the gun when moving or turning, at all, is rather horrible and the bloom is impressively bad when making any chassis adjustment. The ammunition on the other hand is promising with the premier round being your standard full-shot projectile that offers 232 mm of penetration and 300 average damage.

APCR is the gold round for the vehicle and it has a slightly underwhelming 263 mm of penetration on average. The last round is the HE shell, which is absolutely nothing to be concerned about with a measly 50 mm of penetration and 400 average damage.

In totality, the gun is rather poor and the ammunition is adequate, but flawed ultimately. The ammunition's issue is the relatively low damage each shot rolls for, either minimal or maximum. There are instances where other players will willingly trade with you due to your poor alpha. Other heavy tank peers at the tier and higher introduced in the last three years will easily out-trade you. This is not exactly good for a vehicle that relies on nothing but it's inadequate armor and average health-pool in the current climate.

The next concern is armor; where to begin with this, in all honesty, rather uncompelling beast-of-burden. Focusing on performance away from other tech tree counterparts, the frontal armor on the AMX M4 mle. 49 is impressive on paper. But that's it, on paper - it sorely lacks any actual sustainable ability to not get penetrated. The front upper-plate is of no contest for most things firing at you, but your front lower-plate, the commander's hatch (cupola), and the front "cheeks" of the armor package create serious issues for this tank in the current hull-down meta. You will find, as an average player, that you succumb to cupola and cheek shots penetrating your armor quite commonly. If this isn't bad enough, your health pool isn't anything to really save your late-game performance from fizzling out.

To top-off the compounding issues with the lack of effective armor, not just raw thickness, is the awful thin side armor that you simply cannot rely on when side-scrapping. The thinness of the side-plating and the front pre-angled hull cheeks create an abusive dilemma for the machine when any engagements around corners are concerned. You will most likely be penetrated every single time if the player-opposite knows what they are doing or has a tank with a decent gun and ammo. It is not hyperbole to state that this tank being repeatedly matched with tier 10 is a disaster waiting to happen if you intend on going front-line. It cannot, and will not without very good luck, be able to frontally engage any tier 10 tank outside of some light tanks.

In a straight line, the AMX M4 mle. 49 is not "slow" by any means at 40 km/h, but it is hard-pressed in saving the tank. The fact that it bleeds so much speed when turning at all compounds the negatives. The hull traverse is surprisingly not terrible, and can at times save you by tricking your enemy into shooting your side at extreme angles, some auto-ricochet angles, but do not count on the traverse speed to makeup for the fact that it is indeed, still, a very heavy vehicle. The reverse speed is also another surprise at a pleasant 18 km/h, something which smaller and lighter tanks do not always have. Although, if there is one more positive outside of the negatives, it is that the vehicle, at roughly 70 tons, is a very heavy tank and can induce some crippling ramming damage if any downslope presents a target.

Some miscellaneous concerns are the fact that the side profile is rather tall and the vehicle itself is quite massive. Any rounds entering to the side of the vehicle have a significant chance of harming the ammo rack and even cooking it off. If it isn't the ammo rack, it will most commonly be the gunner and/or commander who take the shrapnel. The view range on the vehicle is rather bad and can easily cause you to lose the match if you ever find yourself trying to hunt down light tanks or sneaky tank destroyers.

Overall, the AMX M4 mle. 49, and the clone-copy premium version, AMX M4 mle. 49 Liberté, are underwhelming vehicles with little in the way of actually effective guns and armor. The sad truth is that while once decently competitive, the drawbacks that matter, namely the aforementioned characteristics, hold the behemoth French heavy tank(s) back and make higher-tiered matchups quite unpleasant. Whether it be the rampant gold-spam in live matches, or the vast number of other premium tanks that could outperform the AMX M4 mle. 49 in specialized circumstances. The lack of hull-down capability due to the massive and weak cupola, the poor gun handling, the poor layout of armor on the hull, and the rather decent mobility make the vehicle(s) a chore to play, let-alone do well in. To be blunt, the tank needs to be buffed in order to shine in the current meta.

Being a premium tank, research is not required.

(See the AMX M4 mle. 45 history for the first part of this article)

The AMX M4 project remained still for almost all of 1946. This is directly connected with the ARL 44 entering trials in March of that year. The first French post-war tank was late for almost a year, and trials showed that the vehicle needs extensive improvements. These trials couldn't have left the new tank unaffected. Sadly, the details of the trials are still unknown, but judging by the upcoming metamorphosis, the vehicle's stability was questioned. 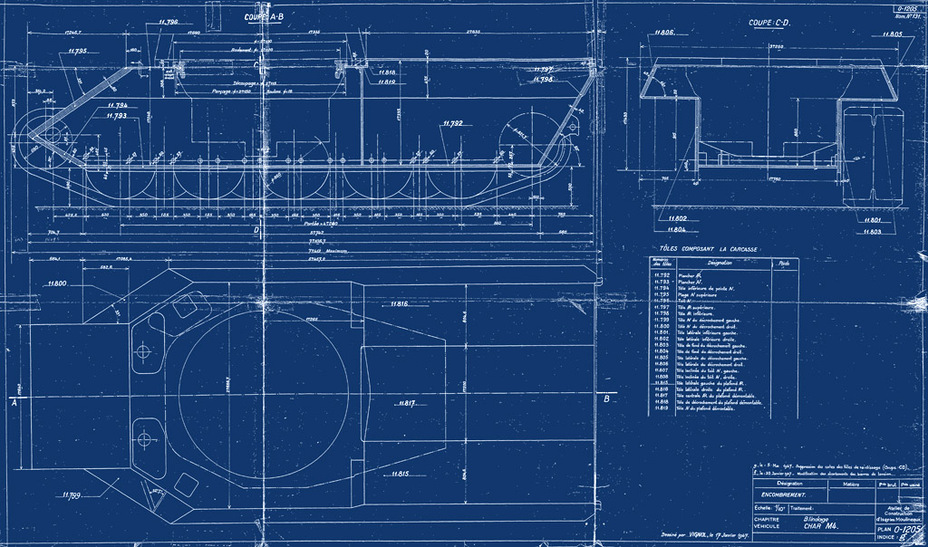 Work on the prospective heavy tank restarted by the end of 1946. The first results were demonstrated by AMX engineers in early 1947. The concept of a 50 ton medium tank did not change. The high power 90 mm gun and the turret that it was installed in remained unchanged.

The main difference was in the tank's chassis. The hull was lengthened from 6705 to 7413 mm due to an increased size of the driver's compartment. Thanks to this, the driver and radio operator received proper hatches in the hull roof. The longer hull also resulted in another road wheel being added. The upper front plate also received sloped cheeks, increasing the odds of a ricochet. 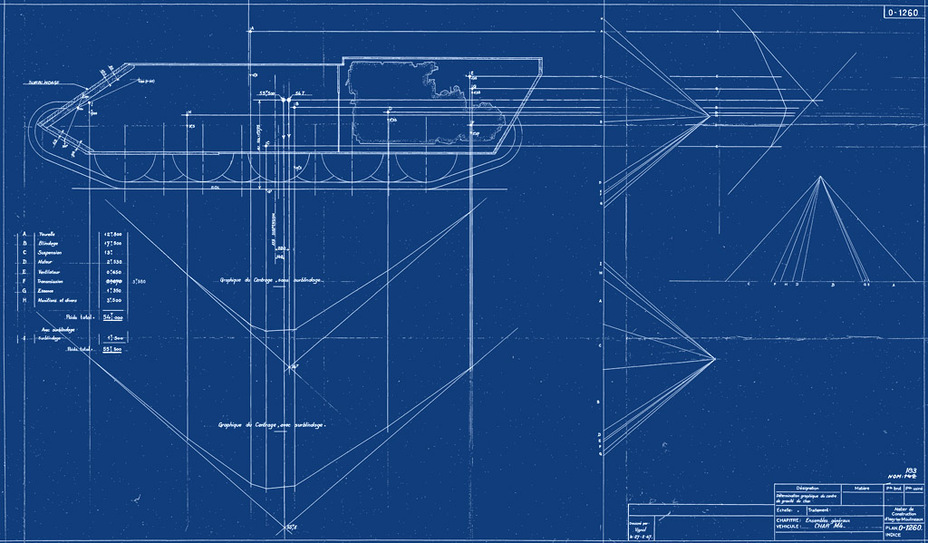 Various variants of the tank's armour were proposed. With a 120 mm thick front, the tank's mass would be 55.5 tons. Because of this, the thick armour was rejected.

This decision wasn't caused by excessive concern for the driver and radio operator. Diagrams indicate that this was the designers' method of improving the center of mass. On the initial design, the turret was shifted forward, which could negatively impact the load on the road wheels.

On the other hand, at what cost was this optimal weight achieved? The front armour was reduced to 80 mm, and even then the estimated mass of this medium tank was 54 tons. A variant with 120 mm of armour that would increase the mass by only 1.5 tons was also explored, but it did not go further than just theory. The 80 mm front armour was finally approved. 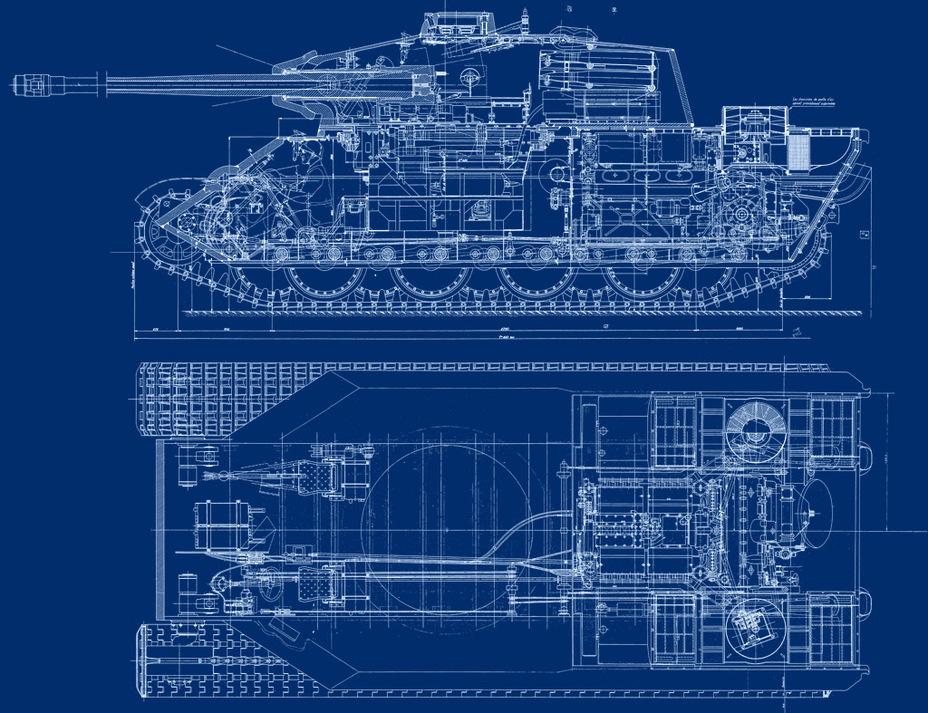 The AMX M4 looked like this in 1949. The project became more and more similar to the German Tiger II.

In 1947-48, the project was evaluated and re-evaluated in every conceivable way. By the beginning of 1949, designers were forced to admit that 54 tons was not the limit. According to revised estimates, the tank's mass was 54.6 tons, 13 of which were for the turret. The size of the new tank caught to to, and then exceeded, the Tiger II. Meanwhile, its armour was thinner than that of the Panther. Several variations of the AMX M4 were planned, including ones with much thicker armor. Of

The solution of the center of mass problem wasn't the end of this journey, but only one episode. 1949 brought radical changes to the design including an oscillating turret, culminating in the AMX 50 project.
click to read more...