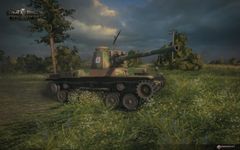 Japan | Medium Tank | Tier V
Battle Tier
1234567891011
Overview
Mouse over "
▲
Well, the ones further down, of course.
" for more information
[Client Values; Actual values in
▲
Specifically, the mismatch in crew values caused by commander's 10% crew skill bonus. Outside of a crew of 1 commander only, 100% crew is a fiction. The client values, given for 100% crew, will normally be taken into battle with 110% crew skill members aside from specific functions, causing their actual performance to deviate from the expected client value. These differences are taken into account in tooltip boxes.
]
Crew
Mobility
Armor
Armament
General
Values are Stock - click for TopValues are Top - click for Stock
Type 3 Chi-Nu Kai

The Type 3 Chi-Nu Kai medium tank is a combination of the Type 3 Chi-Nu suspension and turret and the Type 4 Chi-To gun. Only one prototype was built. It was ready for trials in March of 1945.

The first Japanese tank introduced into the game. With the introduction of the Japanese medium tank line, it has been rendered one of the most pointless premium tanks in the game due to being mostly identical to the standard Type 3 Chi-Nu. Compared to a fully upgraded Type 3 Chi-Nu, it has a better hull traverse speed and stronger turret armour, in exchange for worse gun depression and worse mobility.

See Type 3 Chi-Nu for details; only differences are listed here

The Chi-Nu Kai is a very slow and tall for a tier V medium tank, relegating its role to be a mid-far range sniper. The gun does have a fairly quick aim time as well as decent accuracy to support this playstyle. Trying to fight on the front lines is discouraged, as you will constantly find yourself struggling as it does not have the alpha damage to trade shots with enemies nor the armor to take hits back from them. Its poor overall mobility also makes relocating to another sniping position fairly difficult.

The Chi-Nu Kai has poor armor overall, as the 25 mm of hull side armor can be overmatched by any gun larger than 75 mm, meaning side-scraping will more often than not be unsuccessful. However, you can sometimes get a lucky bounce along the edges of your gun mantlet, which are 150 mm thick. This, combined with a decent gun depression at 6.5 degrees, can make going hull-down against lower tiers an option, albeit an unreliable one due to the rest of the turret only being 50-75mm thick.

It's a premium vehicle so no research required.

The Type 3 Kai is the post-war popular designation of the proposed upgrades to the Type 3 Chi-Nu. Given the late development of the Type 4 Chi-To and Type 5 Chi-Ri, the IJA needed a tank that could actually counter the M4 Sherman and other tanks of the Allies. To this end it was decided to put the Type 5 75 mm Tank Gun one way or another on the Type 3 Chi-Nu, with expanded use of welding to strengthen the hull and adding some armor.

There were two proposals for installing the Type 5 75 mm Tank Gun on the Chi-Nu: Using the turret of the Type 4 Chi-To, or adapting the Tank Gun for the turret of the Chi-Nu. Due to inherent flaws in the design of the Chi-Nu turret such as a lack of ventilation for the gases produced by the main cannon, the former option was chosen. On March 19, 1945, tests using the prototype Chi-To turret on a Chi-Nu hull were conducted at the Irago Firing Ground, and it was deemed that the handling of the tank was unaffected, and the results were satisfactory. This single test vehicle became known as the Chi-Nu Kai.

The success of this test led to the development of the (never officially named) Chi-Nu II, which mounted the production model Chi-To's turret on the Chi-Nu chassis. Only a few tanks of this model were constructed though before the war ended.
click to read more...