USSR | Medium Tank | Tier VI
Battle Tier
1234567891011
Overview
Mouse over "
▲
Well, the ones further down, of course.
" for more information
[Client Values; Actual values in
▲
Specifically, the mismatch in crew values caused by commander's 10% crew skill bonus. Outside of a crew of 1 commander only, 100% crew is a fiction. The client values, given for 100% crew, will normally be taken into battle with 110% crew skill members aside from specific functions, causing their actual performance to deviate from the expected client value. These differences are taken into account in tooltip boxes.
]
Crew
Mobility
Armor
Armament
General
Values are Stock - click for TopValues are Top - click for Stock
T-34
T-34-85
T-43

Final modification of the T-34 tank of 1943. A new three-man gun turret allowed a more powerful 85-mm gun to be mounted. This greatly increased the combat effectiveness of the tank compared to its predecessor, the T-34-76. A total of more than 35,000, in several variants, were produced. Today the tank is still in service in several countries.

The T-34-85 retains the same hull as its predecessor, the T-34, but receives a new, more heavily armored turret with more powerful choices of armament. Stock, it is quite sluggish and armed with the under-par 76 mm S-54, but later on it receives a somewhat more powerful engine and the excellent all-purpose 85 mm D5T-85BM, turning it into a versatile and capable Tier 6 medium tank.

The turret armor is good by Tier 6 standards, but the hull armor is very weak (only 45 mm thick, though it is well-sloped). Going hull-down is a good idea in the T-34-85, since the turret armor is quite good and capable of bouncing a lot of shots. Be mindful of the turret ring—unfortunately the shape of the turret and hull create a shot trap in this area. By no means is the T-34-85 a 'heavy' medium like the M4A3E2 Sherman Jumbo, and it should never under any circumstances make itself the center of attention of the enemy team.

The top 85 mm D5T-85BM is a good gun for Tier 6. It is accurate enough, with sufficiently short aim time, to allow the T-34-85 to act as a sniper if needed, though in that respect it is outclassed by the German Tier 6 mediums with the 7.5 cm KwK 42 L/70. The damage output is also reasonably good, though not quite as good as the 8.8 cm KwK 36 L/56 on German tanks, the 17-pdr Mk V on the Firefly, or the 76 mm M1A2 on the American medium tanks, which have better alpha damage, armor penetration and reload times respectively. 144 mm of penetration using AP is excellent by Tier 6 medium tank standards, inferior only to the Cromwell's 75 mm Vickers HV (145 mm), the Chi-To's 7.5 cm Tank Gun Type 5 Model I, the Sherman Firefly's 17-pdr Mk V, and the 7.5 cm KwK 42 L/70 (150 mm) available to all the German Tier 6 medium tanks, balanced by the D5T-85BM's higher alpha damage. An often overlooked quality of this gun is the HE damage. It deals 300 or more damage if it fully penetrates. It is perhaps the highest damaging HE round of the "proper" medium tank guns at Tier VI. The D5T-85BM's HE rounds can devastate poorly armored tanks. Bringing a few HE rounds on this tank is never a bad decision.

Early versions of the T-34 demonstrated their top performance during the Kursk / Citadel battle in 1943. Their superiority on the battle ground was reached not due to their technical perfection, as in this respect German tanks were largely comparable and in some instances (Tigers and Panthers), far superior to their Soviet counterparts, but was due to the overwhelming numbers used by the Red Army. The price paid for the victory was high. Around 9000 tanks were lost in combat against 2200 German tanks. It also became evident that the T-34 could hardly cope with the new examples of German armor and thus came the time to shift manufacturing priority from the mass production of the current model, to implement a major design modification to the T-34. 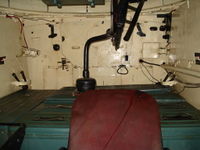 T-34-85s first saw combat in the spring of 1944 with 1st Guard Tank Army. In the hands of experienced tankers, the T-34-85 was an awesome weapon despite the Tiger's superiority at long ranges; that is, the Tiger could kill a T-34-85 from a greater range than the 85 mm gun could penetrate its armor. Still, the T-34-85 stood a good chance of success owing to its maneuverability. Later versions of the Pz. IV were roughly comparable to the T-34 in firepower, but the T-34-85 had better dynamic characteristics combined with the effective armoring. Owing to huge production numbers and the growing skill of Soviet tankers, the T-34-85 proved effective at neutralizing German Tigers and Panthers. Still, the threat from German Panzerfausts forced the introduction of some field modifications, especially during the Battle of Berlin (see photo below). The additional screening consisted of a thin 1.5 mm metal plate or a 3 mm wire mesh welded on the supporting corners. The shield was placed about 15-20 cm from the main armor on the sides of the hull, turret, and the turret's top. Although the screening effectively deflected the hits of Panzerfausts, further development was stopped with the end of the war.

T-34-85's took part in the European and Pacific theaters of WWII, the Korean war, the Middle East, and Vietnam conflicts. The tanks were exported to many countries following the second World War, and were used as recently as the Bosnian war.

The 85 mm D5T-85BM was only developed for the SU-85. The weapon itself never entered service because of the appearance of the SU-100 project. Its configuration on the T-34-85 is fake.
click to read more...

USSR
Medium Tanks
ja:Tank:R07 T-34-85
Retrieved from "http://wiki.wargaming.net/en/index.php?title=Tank:R07_T-34-85&oldid=307746"
Categories:
Your location:
To log in, select the region where your account is registered
CIS Europe North America Asia
Or use Microsoft Login to enter WoT XBOX ecosystem
Log in