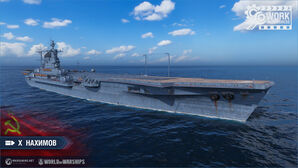 A design for completing a Project 23 battleship as a heavy aircraft carrier. The ship's AA defenses consist of artillery systems that were developed during the post-war period.

Admiral Nakhimov serves as the pinnacle of the all-or-nothing gameplay philosophy of the Soviet carrier line, maximizing the strengths of Pobeda while retaining its characteristic weaknesses. With smart positioning and well-executed strikes, her squadrons can terrorize the opposing team with their ridiculous damage output and nigh-uninterruptible attack runs; yet, if the carrier is stranded far from the action or blockaded by powerful AA vessels, they will struggle to impact the match due to their poor speed. Captains of Nakhimov must carefully balance its squadrons' unorthodox combination of jet boosters, singular attack runs, and low durability to reach the carrier's staggering potential damage contribution.

Nakhimov's general aircraft characteristics echo the trade-offs that define the rest of the line. Their jet boosters and large reserves allows them to engage ships that are close to the carrier with great efficiency, but their poor normal cruising speed puts a dent in their DPM at longer distances. Their all-at-once attack runs deal massive concentrated damage from the very edge of AA range, but require exposed broadsides and prevent the squadrons from lingering for extended spotting. Above all, avoiding flak is critical to success due to the poor aircraft survivability and the sharp increase in power of tier X AA defenses.

After a long strafing period, Nakhimov's attack aircraft squadrons launch a large quantity of powerful HE rockets over a very long and thin ellipse, being more reliant on attacking the target's broadside than other squadrons of its kind. Their large attack range is a double-edged sword; it allows the squadron to spend barely any time exposed to AA, but also prevents them from reactively engaging ships with low air detectability. These squadrons are thus best suited for dealing heavy damage to cruisers and battleships with less than 40mm of deck armor. They are also Nakhimov's best tool for engaging targets behind island cover thanks to their steep attack angle.

Nakhimov's torpedo bombers are highly specialized towards deleting battleships and aircraft carriers. They deal a ridiculous amount of damage between 7 torpedoes with a high flooding chance to boot, but suffer heavily from their poor cruising speed, exceedingly long torpedo arm distance, and lack of a repair consumable. Captains are advised to use these squadrons opportunistically against large vessels that are locked down by crossfires or are otherwise unable to maneuver quickly, as a well-placed drop will cripple the target or at least prompt immediate evasive action. In niche situations where many enemy vessels are tightly grouped, an attack run in their general direction can also be a valuable disruptive tool thanks to the exceptional range of the torpedoes.

Nakhimov's skip bomber squadrons are greatly improved over those of Pobeda, dealing a whopping 8700 damage per bomb instead of 6800 and dropping 8 instead of 6 at a time. These aircraft are the go-to for attacking destroyers and light cruisers, as the bombs can be dropped very far or very close to the target and do not require a long preparation time. If the other more specialized squadrons are unavailable or the captain is unsure of their target at the time of takeoff, the versatility of the skip bombers comes in handy because they are capable of dealing serious damage to almost any target from the edge of their AA range. However, it is important to note that some vessels such as Kremlin and Friedrich der Große feature belt or deck armor in excess of the bombs' 54mm penetration, so captains are still advised to stick to torpedo bombers against such ships with strong external protection.

At first glance, Nakhimov's high ship HP and similar hull to Sovetsky Soyuz may seems like an advantage in terms of armor. However, the exact opposite is the case; by tier X carrier standards, Nakhimov is a very poorly protected vessel. Her citadel is utterly enormous and is only protected by 125mm of armor, allowing even some destroyer-caliber guns to farm easy citadels off of her exposed broadside. Moreover, her flight deck does not exceed 50mm in thickness, affording many aircraft armaments and certain HE shells an ample flat surface to farm damage off of. Coupled with her enormous turning circle and unimpressive top speed and concealment, captains must constantly weigh the risks of positioning Nakhimov closer to the enemy to capitalize on her jet boosters and mitigate the slow speed of her aircraft. Although her secondary and AA armaments are surprisingly effective, Nakhimov should be kept out of harm's way unless it is determined that the benefit of more frequent attack runs outweighs the risk of a sudden and explosive end.

Overall, Nakhimov offers an incredibly high performance ceiling that is tempered by the awkward and cumbersome requirements of both its squadrons and the vessel itself. Captains who are willing to master the carrier's unorthodox aircraft parameters and centralize their gameplan around careful positioning will be rewarded with an unmatched damage output that can capsize even the most durable of opposing fleets.

Admiral Nakhimov does not come with all modules researched. Captains are encouraged to research the improved attack aircraft as soon as possible since the module doubles the amount of rockets launched per run. The improved skip bombers should be researched last as they only offer a modest improvement in speed and durability.

The recommended upgrades for Admiral Nakhimov are:

Ships of U.S.S.R.
Aircraft Carriers
Retrieved from "http://wiki.wargaming.net/en/index.php?title=Ship:Admiral_Nakhimov&oldid=319759"
Categories:
Your location:
To log in, select the region where your account is registered
CIS Europe North America Asia
Or use Microsoft Login to enter WoT XBOX ecosystem
Log in