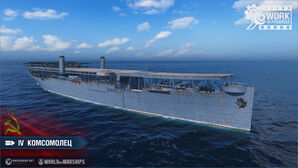 A small and relatively slow aircraft carrier that was reconstructed from a training ship.

What primarily sets Soviet CVs like Komsomolets apart from other carriers is the way in which their squadrons attack; with a single, powerful strike. Komsomolets’ squadrons do not contain reserves, so when they attack the entire squadron will attack. The most notable advantage of this is that the strikes are especially deadly, but the downsides include significantly increased time between attacks and a lack of reserves to mitigate losses to anti-air.

Komsomolets’ rocket attack aircraft in particular make good use of this; their HE rockets do high damage with good penetration, good fire chance and a full squadron deals far more damage with a single strike than any other rocket attack squadron at Tier IV. They are also the fastest rocket attack aircraft at their tier. Despite their potential for high damage, the minimum attack range for these aircraft is the longest at this tier, which makes attacking low concealment destroyers a challenge. They also have the longest machinegun phase for their attack, giving targets more time to take evasion action.

Unlike her attack aircraft, Komsomolets’ torpedo bombers are less impressive. The aircraft are very slow, are not very maneuverable and the torpedoes they drop are also underwhelming. Their low damage, low flood chance, long arming distance, average speed and the slow, fragile planes that carry them result in mediocre performance. The saving grace of these squadrons is that the torpedoes have by far the longest range of any aerial torpedo at this tier making it possible to attack many targets without being threatened by anti-air, and in keeping with the Soviet attack pattern all three torpedoes can be dropped simultaneously. The long arming distance does result in long reaction time for the target, making torpedoes less than ideal for use against fast, agile ships.

The third and final aircraft squadron available on Komsomolets is her skip bombers. These bombers are also very slow, which results in them having rather short range on their bombs. While higher tier Soviet carriers can drop skip bombs from far enough away that they can avoid dangerous anti-air, these less advanced squadrons must get to within 2km of the target they wish to attack. When successful the payloads deal high damage with good penetration and high fire chance.

Each of these aircraft share some common weaknesses that are repeated throughout the Soviet aircraft carrier line. Primarily, they are very fragile and their restoration time is very long. This means that losing planes is easy to do and more difficult to recover from. Players of Komsomolets, and other Soviet CVs, must be decisive with their attacks so as not to take unnecessary losses. Spending too long in enemy anti-aircraft fire or rushing at a well protected group of targets to attempt a single, powerful strike will result in losing aircraft that take a long time to restore. While most enemies that Komsomolets will face at Tier IV will not have the powerful anti-aircraft suites that can be encountered at higher tiers it is well worth considering these vulnerabilities for the future.

Positioning Komsomolets is also an important consideration; she is a vulnerable ship, her citadel is easily damaged and she is incredibly slow. In addition, her anti-air is so weak it cannot be relied upon, so expect any enemy air attacks to be made without losses. Despite these weaknesses, Komsomolets cannot simply hide in the furthest corners of the map, as she must launch a new squadron for every attack and it is inefficient to fly long distances to make every attack. A successful Komsomolets player will find a location that is both safe and not too far away from the enemy. Only positioning and Komsomolets’ excellent concealment can be relied upon to keep her safe, because once she is found she lacks the speed to escape and the armor to survive prolonged enemy fire.

Overall, Komsomolets’ aircraft allow her to deal considerable damage for a carrier of her tier to a wide variety of targets. Care should be taken to preserve what aircraft she has. Although anti-air at Tier IV can be quite forgiving, a reckless approach to attacking will not be met with success at higher tiers. Although Komsomolets’ squadrons are fragile and can struggle to hit smaller targets, they also have the potential to do serious damage and are generally effective against any opposition.

These upgrades are recommended as they are the only available upgrades which improve aircraft performance.

Ships of U.S.S.R.
Aircraft Carriers
Retrieved from "http://wiki.wargaming.net/en/index.php?title=Ship:Komsomolets&oldid=319755"
Categories:
Your location:
To log in, select the region where your account is registered
CIS Europe North America Asia
Or use Microsoft Login to enter WoT XBOX ecosystem
Log in