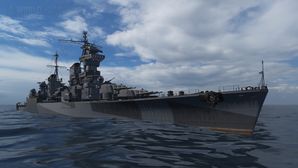 A design for a 15,000-ton cruiser carrying 180 mm guns that was developed for the Soviet Navy at the end of World War II under a new shipbuilding program. The project was notable for its AA defenses, which were reinforced based on the experience gained during prior combat.

Pyotr Bagration is a Tier VIII premium cruiser for the Soviet tree.

Pyotr Bagration's gunnery is heavily polarized towards the usage of her AP shells. The AP shells have a high penetration as well as improved autobounce angles, which coupled with their flat ballistics make it very easy to punish cruisers that showed too much side. Against battleships those shells have sufficient penetration to pierce the upper belt, however the main belt is often off limit especially once these ships angle. However the performance of Pyotr Bagration's HE shells is very lackluster. Out of the box these shells only penetrate 30mm, making them unable to penetrate the plating of same tier battleships. Investing into IFHE increases the penetration to sufficient levels, however this comes at the cost of her fire chance. When using IFHE, Pyotr Bagration's fire setting abilities are below those of any other Tier VIII cruiser, including the German heavy cruiser Prinz Eugen.

What's more are disappointing gun angles, especially when aiming towards the rear. Players who choose to get the third turret firing must show an uncomfortable amount of broadside, opening themselves up to devastating return fire. At close range Pyotr Bagration can offer a pair of quintuple torpedo launchers with a good range of 8km, though getting close enough to use these is not recommended.

In terms of protection Pyotr Bagration has a few advantages and disadvantages. Her health pool is average for her tier, however she can offer a much higher potential health through the usage of the Repair Party

consumable. This gives Pyotr Bagration a lot of survivability against soft damage such as HE fire or overpenetrations. Against large caliber AP fire however Pyotr Bagration's survivability falls apart. Her plating being 25mm except for the midship deck, a thin icebreaker, a small section at the rear and the areas covered by the main belt, overmatch from battleships will prove a painful threat. With the citadel extending well above the waterline, Pyotr Bagration must be careful with every hit she takes or she risks taking catastrophic damage.

Pyotr Bagration has a decent AA suite with her long and medium range aura combining for about 360dps stock. However, even when investing into AA upgrades this may not be enough to stop an airstrike unless the carrier in question is from two tiers below.

As for her playstyle Pyotr Bagration should try to engage cruisers whenever possible. With her good concealment she can surprise other cruisers and see to land hard hitting AP salvos into their side, making life easier for allied destroyers and thus influencing the match in the team's favor. Engagements against battleships should be avoided, as the tools against those are not strong enough to ensure victory unless when firing from extreme range, making Pyotr Bagration unable to assist the team around the objective.

As a premium ship, Pyotr Bagration doesn't have any upgrades to research.

The recommended upgrades for Pyotr Bagration are as follows:

As a premium ship, Pyotr Bagration comes included with Type 10 camouflage that lowers her detection radius, reduces the accuracy of incoming shells, reduces her repair costs, and increases the amount of experience she earns.

Ships of U.S.S.R.
Cruisers
Retrieved from "http://wiki.wargaming.net/en/index.php?title=Ship:Pyotr_Bagration&oldid=312199"
Categories:
Your location:
To log in, select the region where your account is registered
CIS Europe North America Asia Republic of Korea
Or use Microsoft Login to enter WoT XBOX ecosystem
Log in