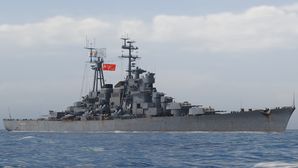 A ship designed and intended to destroy light enemy cruisers and fight against heavy cruisers (Project 66). Unlike her foreign counterparts, she boasted bigger dimensions and better armor protection. The cruiser's main battery surpassed foreign guns in maximum range and destructive power but had a lower rate of fire.

Moskva is available in the Armory for 244,000 Coal

A premium Russian heavy cruiser, Moskva is considered to be more of a battleship than a cruiser. Her play style is unique at its tier, especially given the difficulty of controlling the ship.

Moskva to many players can be considered a contradicting ship. While having only a slightly larger caliber than the standard 203mm/8" gun caliber of most heavy cruisers, Moskva’s main batteries have a long base range of 19.4km, with HE shell capabilities similar to that of the IJN heavy cruisers, and AP shells comparable to a battleship’s in terms of raw damage and penetration; it is quite possible to citadel battleships below 10 km. She has belt and bow plating of 50mm; respectable for a cruiser; protecting her from even Yamato’s shells when properly angled. In addition, Moskva has a high top speed of 34.5 knots, and has a huge health pool, comparable to a Tier VIII battleship. However, Moskva is not without significant weaknesses.

Given the size of Moskva, she has the worst concealment of all cruisers, equal to that of Yamato. This makes her easily avoided by destroyers, given that her radar range is that of the typical VMF 12km. In addition, while Moskva has 50mm belt plating, she also has a very high citadel section. Moreover, she has a horrendous turning circle radius of 1000m and mediocre rudder shift time, making sharp turns impossible and hard-to-port or -starboard potentially punishing. She also has the worst anti-aircraft suite of any Tier X cruiser; while she has good long range AA when you build for it (captain skills and upgrades), she has so few AA guns that a couple of HE salvos will delete her AA defenses, making Defensive AA Fire of low value. This means that, when coupled with her large turning circle radius, she will easily be punished by opportunistic enemy battleships or heavy cruisers. These flaws mean that poor positioning is generally a death sentence. Even though Moskva seemingly has significantly better survivability than most cruisers, an enemy team can quickly eliminate her if they catch her in a poor position.

Overall, Moskva is a double edged ship. On one hand, her armor, firepower, and survivability make her practically a battlecruiser in a cruiser slot, favoring good players and proper positioning. On the other hand, her large profile, clumsy handling, poor AA, and high citadel means that bad players will have a hard time if they play too arrogantly. Tame her power and she will serve you well, but if you are unworthy she will be a stronger enemy than the opponent.

The recommended upgrades for Moskva are as follows:

Moskva plays as a fire-support vessel, but has enough HP to tank quite a few hits if necessary. As a result, commanders should be trained in a similar fashion as battleships, but keep in mind you cannot tank hits for an extended period of time.

Moskva can equip the following consumables:

As a premium ship, Moskva comes with Default permanent camouflage and a set of permanent combat bonuses.

The Moskva (Москва, "Moscow") is based off of the Project 66 heavy cruiser which was an attempt by Russian designers to design a direct counter to the American Des Moines-class. As such, she was designed to be faster than the Des Moines-class, carry a more powerful armament, and to have an immunity zone towards the Des Moines' 203mm shells. In 1953 her plans were revised to improve her survivabilty in response to a perceived edge the Des Moines-class would have in medium to close range engagements. This increased her weight to over 30,000 tons, equivalent to that of an Alaska-class large cruiser, while still only carrying heavy cruiser scale firepower. The first ship was planned to be laid down in 1953 and finished by 1957, however, Stalin's death in 1953 resulted in her, and all other large surface combat ships, cancellation.

Because the USSR never constructed any heavy cruisers, the naming conventions that would've surrounded them can only be guessed. However, Wargaming's decision to give her the name "Moskva" is a quasi historical error as she would have absolutely not been named for the Russian capital because the name had already been given to the second Stalingrad-class battlecruiser that was under construction.

Ships of U.S.S.R.
Cruisers
Retrieved from "http://wiki.wargaming.net/en/index.php?title=Ship:Moskva&oldid=324779"
Categories:
Your location:
To log in, select the region where your account is registered
CIS Europe North America Asia
Or use Microsoft Login to enter WoT XBOX ecosystem
Log in