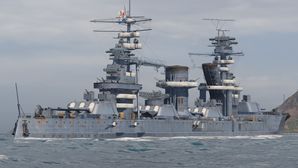 A battle cruiser which, at the time of her laying down, claimed to be the world's most powerful warship. She was very similar to battleship Gangut in terms of her layout and armor type, but differed in her larger size, speed and 356 mm main battery guns.

A classic battlecruiser, the Izmail packs ample firepower and great speed, though there are many weak points in her armor.

While Izmail has the same bow of other battleships of her tier, it is not the 75mm of her predecessor Pyotr Velikiy and cannot bounce shells of above 14". Apart from this, she is quite durable at short and medium range when bow- or stern- on. However, her citadel is very large and can easily lead to a quick demise when showing broadside. Her deck armor is fairly weak as well and vulnerable to plunging fire at range.

12 guns gives her a powerful alpha strike, especially at close range where she has better accuracy. While having two amidships turrets may look awkward and a step backwards towards the configuration of the Gangut, three out of her four main turrets rotate to the rear, which is actually quite comfortable in a kiting posture. However, this very fact combined with a slow turret traverse speed means that switching sides when pushing forwards is a time-consuming affair.

She has a high top speed for this tier of 28 knots; however, like many Russian ships, this is largely due to having a long length-to-beam ratio rather than high engine power. This results in a large turning circle, poor acceleration, and severe loss of speed in turns.

The recommended upgrades for Izmail are as follows:

The captain of Izmail must keep in mind that while his damage control team is quite efficient, it can respond to a limited number of incidents before becoming exhausted.

Izmail was the lead ship of the four Izmail-class battlecruisers of the Imperial Russian Navy (also referred to as the Borodino-class). Intended for service in the Baltic Fleet, construction would be delayed due to poor Russian industrial capacity, which required some components to be obtained from foreign countries. Eventually, construction would be halted after the 1917 Russian Revolution, with all but Izmail sold for scrap in the 1920s. Izmail was considered for completion as an aircraft carrier, but the Red Army managed to cut funding for the proposal, and she was scrapped in the 1930s.

In 1907/1908, armored cruisers were included by the Naval General Staff (MGSh) for its proposed construction programs (the term “battlecruiser” being adopted some years later). The main goal of these fast capital ships was to use their speed to position in a place where all fire could be concentrated on an enemy's flagship. The doctrine indicated Russian armored cruisers would engage directly with enemy battleships. This was reflected in their design process, with moderate speed and good armor protection. Early requirements of an armored cruiser design adopted in May 1910, however, initially showed an opposite interest. The ship was to have a 28-30 knot top speed and a 190 mm main belt, with a minimum of eight 12- or 14-inch guns. A technical evaluation of the requirements proved disappointing, requiring a very large ship and high horsepower to achieve the desired speed. In July 1911 new requirements were approved for the future battlecruisers, marking the shift into heavier armor and slower speed. The new ships were to have a 254 mm main belt, a maximum speed of 26.4 knots, and nine 14-inch guns, as well as twenty-four 130 mm secondary guns and four 2.5 inch AA guns.

On September 8, 1911, the MGSh held an international competition. 23 shipbuilders were invited to design a battlecruiser based on the specifications outlined, having until November 23 to do so. After evaluation of the designs, the winner of the first round was the Admiralty Works variant 6, which had the following specifications:

However, the newly established Main Administration of Shipbuilding (GUK) developed an interest for a four-turret variant. While initially rejected, eventually a second round of the design competition was held, accepting 12-gun designs. While the Admiralty Works variant 6 also won this round in May 1912, it was decided to have Admiralty and Baltic Works cooperate to create both 9-gun and 12-gun designs. The winner of these designs was the Admiralty Works 12-gun variant, which was essentially variant 6 but with a fourth turret fitted onto a new hull. The addition of the fourth turret required compromises in other areas, namely a slower speed and thinner main belt. This was still in excess of the approved 45.5 million ruble funding for the planned four-ship class, which was approved in the same month. In order to provide more funding to the battlecruisers, it was decided to limit the speed of the Svetlana-class cruisers to 29.5 knots. And in September, the ships were officially ordered, with construction beginning in March/April 1913. The ships were named Izmail, Borodino, Kinburn, and Navarin, after battles fought by the Russian Empire.

The ships' hulls were similar to those of the Gangut and Imperatritsa Mariya-class, but with a forecastle deck added to maintain seaworthiness at high speeds. In addition, the third turret was trained aft instead of forward. Their main battery consisted of the 14-inch/52, which had heavier shells (747.6 kg) and, initially, higher muzzle velocity (823 m/s) compared to the American 14-inch/45. However, it was reduced to 731.5 m/s, as the guns proved unable to withstand the pressure, necessitating a reduced charge. The guns were also intended to have a rate of fire of 3 rounds per minute, though this was only at elevations between -5 and +15 degrees. Secondary armament consisted of 24-130 mm/55 guns in castemates, with 12 of them being concentrated towards the bow. This was due to the belief of torpedo attacks most likely being conducted from the front. Anti-aircraft defense came from four 63 mm guns, mounted on the upper decks; they were intended to be — but never were — replaced by 100 mm guns. In addition, the Izmail-class was fitted with four underwater 450 mm torpedo tubes, with a total capacity for 18 Model 1912 torpedoes.

The armor of the Izmail-class was heavily modified as a result of trials conducted on the old battleship Chesma, which was fitted with armor from the Gangut-class. The trials revealed that improvements were needed for the deck, as well as conning tower and turrets. As a result, the belt plates of the battlecruisers had their joints supported by the frames, as well as the use of edge-to-edge joining for the heavier plates. The main belt was 237.5 mm thick, which thinned to 125 mm at the bow and stern. The upper belt was 100 mm, extending to the upper deck, and thinning to 75 mm near the castemates. Deck armor consisted of 37.5 mm protection for the upper deck, and the middle deck had 40 mm plates on top of 25 mm plates. The Izmail-class had multilayered protection typical of Russian battleships, with the bulkheads protected by 75 mm except for the 300 mm aft bulkhead. The 14-inch turrets had 300 mm sides and 150 mm roofs. The conning tower had 400 mm of armor, thinning to 300 mm at the upper deck, and 250 mm on its roof. One major flaw in the class’s armor was the underwater protection, as they only had a 10 mm watertight bulkhead, angled outward towards the hull bottom.

The battlecruisers' propulsion was provided by four sets of steam turbines, each powering one shaft. The turbines were rated at 66,000 total horsepower, increasing to 90,000 shp under forced load. The ships would have carried 2,006 tons of coal and 1,935 tons of oil, giving them a range of 2,280 nautical miles.

Before the start of World War I, construction of the Izmail-class was delayed, as Russian factories were overloaded with orders. A lack of supplies also required some components to be ordered from abroad. A review in the spring of 1914 decided to delay the launch of Izmail and Borodino to October 1914, although none of them would actually be launched until 1915, with Navarin being the last in 1916. At the start of the war, Izmail’s hull was 43% complete, with the other battlecruisers considerably behind. Due to delays caused by the war and problems with obtaining components abroad, the battlecruisers were denoted as “Second Rank” projects, essentially halting all work.

While the delays allowed for modifications to the design, as well as proposals for post-war completion of the ships, the Russian Revolution in February 1917 put a temporary pause to these ideas. Afterwards, the condition of the hulls was inspected, and work on Izmail resumed in the summer of 1917, though only to keep jobs for workers. However, work on all four would eventually be halted again by the end of 1917. In October 1921, an established subcommittee by the Central Commission for the Renewal of Military Industry determined that Izmail could be feasibly completed due to her relatively advanced state compared to her sisters. It was decided to complete Izmail to her intended design, and possibly complete Kinburn and Navarin with 16-inch guns, likely due to information about foreign battleships being armed with the same caliber. However, the 16-inch variants had many issues that would render them obsolete, including the difficulty in obtaining 16-inch guns in the first place. Eventually, Borodino, Kinburn and Navarin were sold for scrap on August 21, 1923 to a German company.

As the only ship of her class remaining, Izmail was considered for completion as an aircraft carrier. The proposal was well flushed out and even approved in July 1925 to begin designing such a ship. The army, however, was strongly opposed to any additional navy funding. A special commission for reviewing the navy's needs, dominated by army men, was convened in December 1925, and canceled the aircraft carrier conversion on March 16, 1926. Izmail was scrapped in 1931.

Ships of U.S.S.R.
Battleships
Retrieved from "http://wiki.wargaming.net/en/index.php?title=Ship:Izmail&oldid=325207"
Categories:
Your location:
To log in, select the region where your account is registered
CIS Europe North America Asia
Or use Microsoft Login to enter WoT XBOX ecosystem
Log in