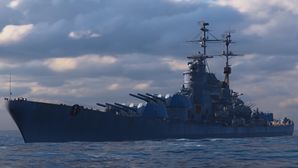 A battleship design developed after the end of World War II (Project 24). The ship constituted a further development of the Sovetsky Soyuz class, intended to counter US battleships of the Iowa and Montana classes.

Slava is the epitome of the sniper BB archetype. She can dish out damage very effectively at any range, however, her durability and dynamics leave much to be desired.

The main battery is the main selling point of the ship. Her AP shells which have outstanding flight time and penetration parameters at any engagement range, which in practice translates to her being able to threaten unwary or careless enemy ships, even battleships, with citadel hits all the way out to her very long maximum base range. Her HE is nothing to scoff at, but it's also not really impressive in any way. Her rather peculiar dispersion pronounces her ability to punish broadsides at any range even more - while it may hardly win any prizes at close and medium ranges, Slava's horizontal dispersion at long range outperforms that of all other BBs, even very accurate ones such as Thunderer or Georgia. Her vertical dispersion is even more peculiar as it appears to be much tighter compared to guns with similar ballistics, so much so that Slava's captain will rarely find his shots overshooting or undershooting, provided he/she aimed correctly. All of this combined make Slava exceptionally strong at punishing mistakes. However, considering her exceptionally long reload (which makes swapping to HE unattractive), her peculiar dispersion and her rather slow turret traverse, Slava will have a lot of trouble dealing with players who mind their broadside exposure.

Her survivability is easily the worst among her peers, with the 32 mm midsection deck making her highly vulnerable to cruiser HE fire and overmatch by AP of 460 mm or larger, and the 25 mm plating on her bow and stern making her vulnerable to overmatch by all but one BB in her matchmaking spread. To add insult to injury, she only gets 3 base charges of Repair Party

which makes for a pretty low combined potential HP pool. On the plus side, she has relatively good concealment (13.2 km with all bonuses applied), which makes disengaging relatively easy when needed.

Her secondary battery is barely worth mentioning, considering it has relatively low base range and volume of fire, making building for it highly inadvisable. Her AA suite is relatively strong compared to her peers, considering the large number of 57 mm guns which provide very good AA DPS, and the long range of her numerous 130mm dual purpose guns.

Her maneuverability is rather underwhelming - her massive turning circle and mediocre rudder shift time may make maneuvering through tight channels quite challenging, as well as making it hard to dodge incoming torpedoes.

The bottom line is, Slava's weaknesses more than compensate for her strengths, which makes her a surprisingly underwhelming battleship compared to most of her peers. Her passive play style may not appeal to many players, but the difficulty of playing her is not very high at all. She is best played as a fire support ship that exploits broadsides and tries to set up crossfires while avoiding getting shot at.

As a special ship, Slava doesn't have any upgrades to research.

Slava can employ a standard BB tank build, seasoned with a buffs appropriate to a sniping role. She can greatly benefit from the legendary commander Nikolai Kuznetsov's talent 'Will to Victory'. She can also benefit from a build that focuses on offsetting her very slow turret traverse in order to allow her better chances of exploiting enemy broadsides, e.g. the improved Grease the Gears skill found on the unique captain Viktor Znamensky coupled with the Main Battery Modification 2

The recommended upgrades for Slava are as follows:

Slava has a very slow turret rotation so Grease the Gears is very helpful.

As a premium ship, Slava comes with Default permanent camouflage and a set of permanent combat bonuses.

Slava in World of Warships is based on Project 24, a post-war battleship design developed in the mid-to-late 1940s as a followup to the Project 23 Sovetsky Soyuz-class battleships.

In 1939 several faults were found with the design of the Sovetsky Soyuz-class. Although some Project 23 variants corrected these faults, in December of 1940 it was decided to instead develop a completely new project, taking into account desired characteristics and the fact that slipways would become available only in 1943. Thus, Project 24 was born.

In May 1941, preliminary Operational-Tactical Requirements (OTZ) were outlined for the newly-designated project. While the main battery and secondary battery were to remain the same as the Sovetsky Soyuz-class, the outline sought improvements to the battleship’s AA, armor scheme, speed, range and torpedo protection. Work on Project 24 was assigned to TsKB-4, which had worked on the Sovetsky Soyuz-class. However, with Germany’s invasion of the Soviet Union in June 1941, work on the project temporarily ceased until the bureau was evacuated to Moscow in August 1941, where work continued. Initial studies of Project 24 bore a strong resemblance to Project 23, though with refined individual aspects. The first outline design had the following specifications:

Throughout 1944 and 1945, the navy’s Scientific-Technical Committee (NTK) and the Naval Academy carried out numerous studies on the battleship. These designs varied in size (from 75,000 to upwards of 130,000 tons), armament (12 406 mm to 9 457 mm guns). These designs were significantly larger than those of TsKB-4, due to information about the American Montana-class. Although the class was canceled in 1943, the Soviet Union expected construction on battleships by Western nations to resume. Indeed, several Western nations immediately following World War II continued to work on their battleships, such as the British Vanguard and French Jean Bart. However, it soon became apparent that there would be no new battleships laid down, and so the Soviet Union reverted its design efforts to countering the Iowa-class with 75,000 ton battleships. In August 1945 the navy drew up construction plans for a post-war navy that envisioned at least 10 75,000 ton battleships throughout the next decade. However, Navy Minister Nikolai Kuznetsov proposed a limit of four battleships. In a conference with Stalin on September 27 1945, the Soviet Union leader proposed a further reduction on the number of battleships — with one Project 23 battleships completed, and two more battleships laid down in the next few years. In November the planned battleships were delayed to 1955 for them to be laid down. Admiral Kuznetsov approved a revised OTZ on December 19, 1945, which had the following specifications:

It was planned for the tactical-technical requirements (TTZ) to be finished in 1949, the sketch design in 1951, and the technical design in 1952. Work on Project 24 was handed over to TsKB-17, as TsKB-4 was "reoriented" to "standardization", and the former was selected for future work on the battleship. In 1948 a new design bureau, TsKB-L (redesignated TsKB-16 in October 1949), took over work of Project 24, as well as work on Project 82 (the Stalingrad-class battlecruisers), which was also previously worked on by TsKB-4. However, Project 82 received a higher priority, as Stalin became more interested in it than Project 24, and as a result work on the latter proceeded slowly. Despite this, by 1950 at least 14 outline designs were developed for Project 24, in part thanks to TsKB-16’s cooperation with the navy’s Central Scientific-Experimental Institute for Warship Construction (TsNIIVK), established in 1946. The design process of Project 24 at the time was driven by exaggerated claims of the Iowa-class’s capabilities — it was believed the class had an armor belt up to 19-inches thick, and exceeded speeds of up to 35 knots during trials. Due to this, Project 24 was designed with a massive displacement, ranging from 80,000 to 100,000 tons, and — despite the requirement of 406 mm guns — armed with 457 mm guns in some variants.

In late 1950 design work of Project 24 was handed over to the Shipbuilding Ministry's warship research institute (TsNII-45), to allow TsKB-16 to concentrate on Project 82. However, Stalin still paid intermittent attention to the battleship, and became displeased with its pace of work and increasing size. He rejected any design with guns larger than 406 mm, and on April 18, 1950, a revised TTZ was approved, reducing the maximum size to 73,000 tons. Variant XIII, developed by TsKB-16, was selected for further development. The variant had several weight-saving features, such as reduced magazine capacity, as well as a reduction of the 130 mm battery to 16 guns. However, when the Ministry of Shipbuilding sent a copy of the TTZ to TsNII-45 for analysis, TsNII-45 criticized the design as one suitable for a World War II battleship, but not taking into account recent developments. TsNII-45 instead put forth a counterproposal for "small battleships" — universal ships that, operating in groups, could overwhelm a single target greater their size. After further study, the Ministry of Shipbuilding came to favor the small battleship over the revised TTZ for Project 24, but the Ministry of the Navy did not. A meeting was ordered for both the Ministry and the Navy to jointly study both concepts, but none took place. And with Stalin’s death in 1953, both Project 24 and the small battleship concept would cease development.

Ships of U.S.S.R.
Battleships
Retrieved from "http://wiki.wargaming.net/en/index.php?title=Ship:Slava&oldid=324271"
Categories:
Your location:
To log in, select the region where your account is registered
CIS Europe North America Asia
Or use Microsoft Login to enter WoT XBOX ecosystem
Log in