Homepage/
World of Warships/
Kaga B 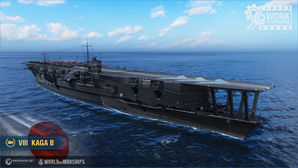 Until the early 1940s, she was one of the biggest aircraft carriers of the Imperial Japanese Navy. Initially laid down as a battleship, she was redesigned during construction to become a carrier. The ship had good armor protection for her type, carried quite numerous air group and powerful secondary battery guns.

Kaga B is a Tier VIII premium Japanese aircraft carrier. Unlike Saipan’s style of having fewer, higher tier aircraft, Kaga B instead provided her captain with large numbers of lower tier aircraft. She is able to launch copious amounts of bombers at the enemy team, but must be careful of the anti-aircraft abilities of same and higher-tier ships. With proper target selection and flak avoidance, Kaga B can strike even Tier X targets and still have full squadrons ready to go in the latter stages of the game.

Unlike the IJN tech tree carriers, Kaga B has HE dive bombers. She drops four bombs per drop with 3 drops per squadron. What makes these dive bombers special is not the bombs, but the attack pattern. The dive bombers dive low very quickly and travel laterally at a very low height at fast speeds, which allows players to drop on targets at a very low height and ensure a high percentage of bomb hits. This is very useful for dropping maneuverable targets such as destroyers and light cruisers. The low height of the drop allows several bomb hits on destroyers per attack, dealing high amounts of damage in proportion to their maximum health.

As a Premium ship, Kaga doesn't have any upgrades to research.

As a Black Friday ship, Kaga B comes included with the "special" camouflage that lowers her detection radius, reduces the accuracy of incoming shells, reduces her repair costs, and increases the amount of experience she earns.

Ships of Japan
Aircraft Carriers
Retrieved from "http://wiki.wargaming.net/en/index.php?title=Ship:Kaga_B&oldid=313920"
Categories:
Your location:
To log in, select the region where your account is registered
CIS Europe North America Asia Republic of Korea
Or use Microsoft Login to enter WoT XBOX ecosystem
Log in