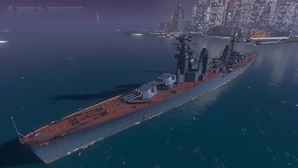 This ship was designed as a light "squadron escorting" cruiser (Project 28). She boasted high speed and powerful artillery but her armor protection was inferior that of her foreign contemporaries.

Shchors is widely regarded as a moderate upgrade from Budyonny, featuring one more turret and more hit points. She even has less armor in some aspects compared to Budyonny, losing citadel armor for more even plating across the ship. Compared to its opponents at Tier VII, it features more range than the others besides Yorck. However, having 6-inch guns at a tier where heavy cruisers start to become dominant is a serious drawback, because Shchors’ armor is already weak enough to make it vulnerable to even destroyer-caliber shells. In addition, Shchors shares the common "odd citadel" all Russian cruisers have, which makes the citadel rise high out of the water and makes over-penetrations more likely.

Essentially, think of Shchors as a rapid-fire sniper that will be punished for closing to medium range of almost any other ship.

Shchors is vulnerable to incoming fire regardless of how many hit points she has; the range module upgrade is likely the best place to invest early experience gains in order to increase the range at which she can engage enemy targets.

The recommended upgrades for Shchors are as follows:

Shchors can equip the following consumables:

Shchors (Щорс) is based off of the Project 28 light cruiser, an attempt by Russian designers to create a light escort cruiser that could protect larger ships from attacks by light enemy forces. Based upon a lengthened Kirov hull, she was to be equipped with 152mm/57 guns over the 180mm/57 guns of her predecessor. This is due to a prioritization of fire rate over damage and to make the ship a light cruiser under the London Naval Treaty of 1936, which the USSR had been considering signing. Five ships were planned to built over a period of ten years; two were to go to the Northern flotilla and the other three were to go to the Baltic fleet. Development began in July 1936 and was headed by the Leningrad Design Institute. A preliminary draft was completed by June 1937, but the project was cancelled on October 1, 1937 in favor of the Project 68, which became the Chapayev class.

The ship was given the name Shchors by Wargaming in accordance with the Soviet tradition to name light cruisers after Bolshevik revolutionaries, the said person being Nikolai Shchors.

Ships of U.S.S.R.
Cruisers
Retrieved from "http://wiki.wargaming.net/en/index.php?title=Ship:Shchors&oldid=319741"
Categories:
Your location:
To log in, select the region where your account is registered
CIS Europe North America Asia
Or use Microsoft Login to enter WoT XBOX ecosystem
Log in