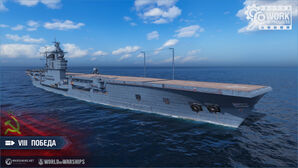 A variant of a large aircraft carrier project based on the hull of a Kronshtadt-class cruiser. The ship's main artillery armament comprises 130 mm dual-purpose mounts.

Pobeda is the continuation of the Soviet aircraft carriers, with a new addition of Jet Assisted Take Off. She carries the same squadron set up as the previous carrier Serov, but with more planes and damage per squadron.

Pobeda features a top speed of 33.5 knots, 1090 meter turning radius, and 14.9 seconds of rudder shift time. Additionally, she features low surface and air detectability, with 12.06/10.81 kilometers respectively. Her hull has 55200 hit points with 34% torpedo protection Her armor is standard 19mm hangar plating and bow/aft armor. She also has a 30mm deck which can protect her against long-range Battleship armor-piercing (if they are not 18 inches or higher in caliber). Her citadel armor scheme is like Kronshtadt, in which the citadel is long and exposed from the side. Without angling, Pobeda will receive citadels easily

Pobeda’s Attack Aircraft carry one squadron of 6 planes, which fire 24 rockets on a 5~second delay (machine gun fire + rocket flight time) on a maximum speed of 201 knots. These rockets penetrate 40mm of armor and have a 17% base fire chance, which makes them effective against many Battleships and Cruisers. The maximum alpha is 3500 x 24 (which is citadel damage and does not consider saturation)

The attack aircraft start their attack run from higher up with a long attack time and large ellipse aiming circle. The rockets are ineffective against destroyers who attempt to dodge. They also have a low hit point pool, with 1000 base hp per plane. This weakness is offset due to the attack run starting further out compared to other nations’ attack aircraft. The planes have a regeneration time of 76 seconds per attack aircraft.

Pobeda’s torpedo bombers carry one squadron of 5 planes, which drop 5 torpedoes total, with a max plane speed of 150 knots. The torpedoes are slow with a base speed of 41 knots and have an alpha strike of 4533 x 5 (which does not consider torpedo protection). Combined with slow speed and 661-meter arming distance, captains must lead further than normal to land all 5 torpedoes.

The torpedo bombers also have low hp pools, having 1470 base hp per plane and the longest regeneration time of all of Pobeda’s aircraft (109 seconds base per bomber).

Pobeda’s skip bombers carry one squadron of 6 planes, which drop 6 skip bombs in total, with a max plane speed of 155 knots base. The skip bombs bounce 3 times in total, penetrate 43mm of armor, and have 39% base fire chance.

Due to how skip bombs have travel time, captains must lead accordingly (usually one ship worth of length) and aim the reticle further up to avoid hitting belt armor and instead hit superstructure. The skip bombs have a maximum alpha of 8700 x 6 (which is citadel damage, so the effective damage counting saturation is lower). The skip bombers have a low hp pool, having 1310 base hp per plane and a regeneration time of 89 seconds per bomber.

Pobeda carries 6 x 2 (130mm) secondaries, which have a base range of 6.6 kilometers. Due to not having improved dispersion, it is generally not recommended to spec for these secondaries. However, due to the good concealment with a full conceal build, they can provide protection against stray destroyers and submarines.

Pobeda features 16 x 2 (45mm) SM-16 AA Batteries as well as the 6 x 2 (130mm) dual purpose secondaries. The AAA has a 6-kilometer base range, with 5 flak explosions that deal 1470 damage. Her long-range AA batteries deal 95 continuous damage, with her medium range dealing 266 damage. Her AA defense is not enough to stop carrier strikes if the opposing carrier avoids flak explosions.

Pobeda plays similarly to her successor Admiral Nakhimov as she features Jet Assisted Take off on all her strike aircraft. Due to this new addition, captains will want to push closer to the enemy team as her slow plane speed and one strike mechanic encourages aggressive positioning to increase damage per minute and squad rotations. Her good concealment (with the module) helps captains accomplish this playstyle. It is worth noting that her hull is not particularly durable, and while her deck armor is 30 instead of the standard 25mm deck of most Tier VIII carriers, she will still die easily from high explosive and overmatching armor piercing shells.

An ideal game for Pobeda is for her to position near islands, pushing with her team on the winning flank, and rotating her squadrons for damage over time stacking. This is not always achievable due to how case by case each battle is, so captains should not always push Pobeda into aggressive positions as it can cause premature death. While her squadrons drop all armaments at once and have the potential for massive alpha strike, their lower hp means attack grouped enemies will result in heavy plane losses (like most other Aircraft Carriers). It is important to choose targets that are isolated or in unfavorable positions to minimize plane losses and maximize damage per minute. Cruisers with AA Battery range equal to concealment make it difficult to minimize plane losses.

Unlike other carriers, the Soviet Carriers rely on broadside targets to maximize damage from their strikes.Pobeda is no exception to this rule. Striking bow in targets will result in minimal damage output. Due to how her strike aircraft work, leading correctly is important to learn due to the slower torpedoes, attack aircraft delay, and skip bomber bounces. Pobeda captains will find striking slower/larger ships to be much more effective than chasing destroyers. While the skip bombers can smash destroyers with their alpha strike, destroyer players who turn off AAA and stay bow/stern into the strike will avoid much of the skip bombs, hampering Pobeda’s damage output.

The torpedo bombers are the weakest of the three armaments due to high regeneration time and time spent in AA battery range. Thus, captains should use attack aircraft and skip bombers early in the game. The torpedo bombers should be used later on in the game when battleships and cruisers are stuck in unfavorable positions and when AA batteries are damaged/destroyed.

Availability of researchable upgrades for Pobeda is as follows:

The recommended upgrades for Pobeda:

Ships of U.S.S.R.
Aircraft Carriers
Retrieved from "http://wiki.wargaming.net/en/index.php?title=Ship:Pobeda&oldid=319757"
Categories:
Your location:
To log in, select the region where your account is registered
CIS Europe North America Asia
Or use Microsoft Login to enter WoT XBOX ecosystem
Log in