Admiral Makarov was first released for Doubloons on 20 December 2017 for 6 weeks, then twice very briefly (2018 and 2020). During the Santa's Gifts event in December 2020, she was often the first ship obtained.

Admiral Makarov has a bit more stealth (lower detection radius) and a little bit less main battery range. Her mid- and short-range anti-aircraft armament has been completely redone, and she now packs a lot more punch in her middle ring while losing virtually all of her short-range AA guns. She has less overall AA than Nürnberg, but she has more available in her outer two AA rings than to hopefully thin out enemy bombers before they get too close. Like Nürnberg’s top hull, she does not have access to the Catapult Fighter

consumable, but can choose between Defensive AA Fire

. As this iteration of Nürnberg is Russian, she does not have access to the improved German version of Hydroacoustic Search.

Like Nürnberg, Admiral Makarov has a few completely unique features. For instance, her two rear turrets fully traverse a 360° arc. This enables a captain to be completely angled towards an enemy ship, and change course while not having to worry about the rear turrets pointing the wrong direction. In addition, the high explosive shells on Admiral Makarov do not follow the normal HE penetration rules, where shells are capable of penetrating armor 1/6th their caliber. Instead, Admiral Makarov follows the German cruiser HE penetration rule — which is 1/4th instead — and her HE shells will penetrate any armor less than 37mm thick. This basically equates to having the Inertial Fuse for HE Shells skill baked into the ship herself.

Admiral Makarov’s strengths are noteworthy, but so are her weaknesses. While Nürnberg veterans may be used to it, her turret layout is still somewhat awkward and she is very lightly armored. Battleships can citadel her with ease at virtually all angles, and enemy heavy cruisers — such as Aoba or Molotov — salivate at the thought of catching Admiral Makarov broadside with AP rounds in their barrels. At very close range, players may actually want to sail broadside to battleships in an attempt to maximize over-penetrations due to the hull's narrow beam, but this will not work as well against cruisers. Playing Makarov well requires careful positioning and extremely good situational awareness; she is not a ship that one can put into a risky situation and live to fight another day. She'll reward cautious play, but will fold quickly under concentrated enemy fire.

As a Premium ship, Admiral Makarov doesn't have any upgrades to research.

This upgrade configuration increases the durability and power of Admiral Makarov’s anti-aircraft armament. For players who do not wish to specialize in anti-aircraft duties, Main Armaments Modification 1

should be mounted in Slot 1 and Aiming Systems Modification 1

should be mounted in Slot 3.

As a Premium ship, Admiral Makarov comes included with Type 10 camouflage that lowers her detection radius, reduces the accuracy of incoming shells, reduces her repair costs, and increases the amount of experience she earns. 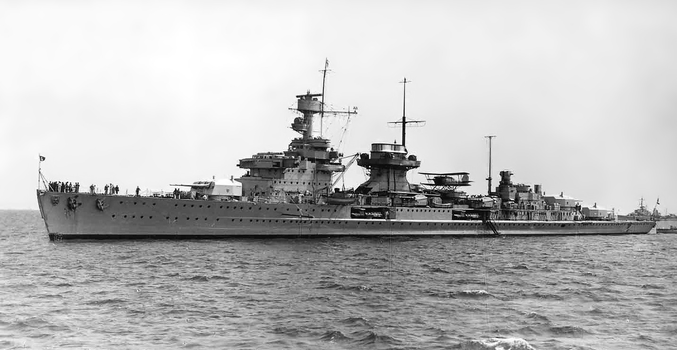 Ships of U.S.S.R.
Cruisers
Retrieved from "http://wiki.wargaming.net/en/index.php?title=Ship:Admiral_Makarov&oldid=315405"
Categories:
Your location:
To log in, select the region where your account is registered
CIS Europe North America Asia Republic of Korea
Or use Microsoft Login to enter WoT XBOX ecosystem
Log in