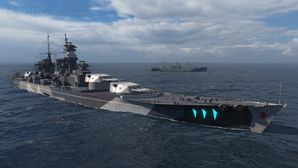 Sovetskaya Rossiya is the pride of the Northern Parliament—one of the biggest and mightiest battleships at sea. She was designed and built during the Great War as part of the overall strategic plans. From the Azur Lane game.

AL Sov. Rossiya first was released for sale on 24 July 2020 for the Azur Lane: Third Wave event. With the Fourth Wave event going live in update 11.4, she was available for 20,800 doubloons. She has not been available since.

AL Sov. Rossiya is a Tier 9 collaboration ship, being in many aspects similar to her same tier counterpart Sovetsky Soyuz.

Unlike Sovetsky Soyuz, AL Sov. Rossiya focuses less on close range engagements and is more versatile. She uses the same dispersion formula of American battleships, which gives her worse accuracy at close range while being more consistent at longer range when compared to Soviet battleship dispersion. At 14km and beyond, AL Sov. Rossiya has a smaller dispersion. In comparison to Sovetsky Soyuz her turret traverse is drastically reduced, from 6°/s to 4°/s.

Like Sovetsky Soyuz, AL Sov. Rossiya has distributed armor allowing her to absorb large volumes of fire when properly angled. All turrets having 300° of movement it is not difficult to maintain an advantageous angle against any single opponent. However, AL Sov. Rossiya only has the stock hp value of her counterpart, leaving her in the long run less survivable.

The maneuverability of AL Sov. Rossiya, while marginally better than that of Sovetsky Soyuz, still lags behind and it is thus recommended to be wary of the surroundings to prevent torpedo hits or scenarios where one has to turn away under fire. The anti-air armament is worse than that of the Tech Tree counterpart, making AL Sov. Rossiya very vulnerable against any carrier that wishes to strike her.

In terms of gameplay AL Sov. Rossiya plays similarly to Sovetsky Soyuz, although to compensate for her weaknesses while capitalizing on her strengths it is recommended to maintain a little more distance than with the Tech Tree battleship. Keeping a constant angle against other battleships and picking off broadside targets and cruisers allow AL Sov. Rossiya to have her impact on the match.

As a premium ship, AL Sov. Rossiya has no upgrades to research.

As a premium ship, AL Sov. Rossiya comes with Default permanent camouflage and a set of permanent combat bonuses.

Ships of U.S.S.R.
Battleships
Retrieved from "http://wiki.wargaming.net/en/index.php?title=Ship:AL_Sov._Rossiya&oldid=322022"
Categories:
Your location:
To log in, select the region where your account is registered
CIS Europe North America Asia
Or use Microsoft Login to enter WoT XBOX ecosystem
Log in