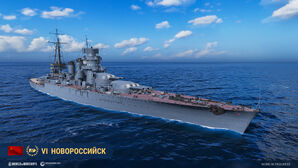 A former Italian battleship, Giulio Cesare, which was transferred to the Soviet Union after World War II as part of the war reparations. In the early 1950s, the ship underwent a major overhaul and received Soviet AA machine guns and detection equipment.

Novorossiysk was first available as a mission reward on 15 Dec 2021.

Novorossiysk first launched as the Italian dreadnought battleship Giulio Cesare in 1914; later transferred to the Soviet Navy as part of post-World War Two reparations. She subsequently saw use as a training ship. In 1953, all of her light AA guns and fire control systems were replaced as stop-gap armament while plans to upgrade her secondaries and temporary AAA were drawn up. On the night of 28 October 1955, an explosion forward of the first turret caused uncontrollable flooding, leading to her sinking. While the true cause of the explosion is still uncertain, it was officially declared as a German mine laid during World War Two. A later underwater survey corroborates this, with 32 German mines found in the area, some in close proximity to the wreck. After two years, Novorossiysk was salvaged and scrapped.

At first glance, Tier VI Novorossiysk resembles an up-tiered Guilio Cesare. However, while they were the same ship historically, they differ significantly in game. Specifically, Novorossiysk trades a large health pool for better accuracy, improving performance in long range engagements.

Compared to her Tier V version, Novorossiysk loses some bow and stern armor, but carries a more heavily armored superstructure and upper belt. As a result, every ship with a gun caliber of 228mm or larger can overmatch her bow and stern — a significant downgrade in survivability. While Novorossiysk does not have the icebreaker bow commonly found on Soviet heavy cruisers and battleships, she features 110mm and 130mm fore and aft end armor belts to deflect incoming fire. Her heavy side plating consists of a lower 220mm main belt, followed by a lighter 130mm belt stretching to the deck on the aft end of the ship, and light 26mm plate on the fore end of the ship. With an underwater citadel further protected by a turtleback layout, other ships will find ‘’Novorossiysk’’ a difficult battleship to citadel.

Another difference between Novorossiysk and her Tier V self is the main battery range, with just over a kilometer more than Giulio Cesare at 17.4km. As reload stays the same, this gives Novorossiysk an average range and reload for battleships at Tier VI. However, the AP shells low deal the least amount of damage out of all Tier VI battleships, with an anemic maximum of 9250 damage per shell. This decreases her damage output by 5% relative to Giulio Cesare.

Like many other dreadnought-era ships, Novorossiysk’s carries a minimalist anti-aircraft suite. She has no short range AA, a medium range suite with a range of 3.5km and a damage of 190, and a long range suite with a maximum range of 4.6km and damage of 28. Further disadvantaging Novorossiysk is a small flak bonus of 1050. As such, commanders should stick near a teammate when focused by enemy aircraft squadrons, and play cautiously when facing higher tier CVs.

Unlike most Soviet battleships, Novorossiysk is specialized for fighting at range. Like other long range focused Soviet battleships like Slava, Novorossiysk’s health pool is below average at a low 40,100 HP. Like most other Soviet battleships, she carries four charges of Fast Damage Control Team with a 10 seconds base duration and 40 second base cooldown. Her minimum detect range of 13.5km is worse than average, leaving only 4km of buffer for concealed maneuvers.

With these factors in mind, staying at range reduces the amount of return fire received , allowing her to contribute to the battle for longer. Novorossiysk should primarily focus broadside cruisers and battleships at range and use island cover to help support pushing flanks.

As a premium ship, Novorossiysk has no module upgrades to research.

As a premium ship, Novorossiysk comes with Default permanent camouflage and a set of permanent combat bonuses.

Ships of U.S.S.R.
Battleships
Retrieved from "http://wiki.wargaming.net/en/index.php?title=Ship:Novorossiysk&oldid=321620"
Categories:
Your location:
To log in, select the region where your account is registered
CIS Europe North America Asia
Or use Microsoft Login to enter WoT XBOX ecosystem
Log in