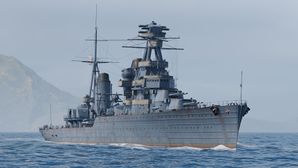 One of the first large warships designed and built in the U.S.S.R. (Project 26). Despite her small displacement, she is equipped with powerful long-range main guns and has good speed. In contrast to the majority of her contemporaries, Kirov has weak armor.

Kirov is available for purchase in the Armory for 43,000 Coal

Kirov is a very different beast to Tier IV Svietlana. While Svietlana is essentially an oversized destroyer with better armor and more guns, Kirov has more in common with its Japanese counterpart, Furutaka. Where Svietlana relies on sheer volume of fire from its fast-firing 130 mm guns, Kirov has much more powerful 180mm guns, capable of severely damaging even battleships at close ranges, and with a maximum range comparable to that of the German Königsberg. The 180mm guns also have fairly good ballistics, which makes hitting targets at long ranges easier. Kirov is also capable of high speeds, and accelerates fairly well.

However, these qualities come at a price. First, Kirov is very much a glass cannon, with poor armor even for a Tier V cruiser. She can take citadel damage from almost any angle from even other cruisers. She is also a large ship with exceptionally poor concealment, comparable to that of battleships, and will be among the first ships spotted, especially when aircraft are in play. The most serious weakness of Kirov is her lack of maneuverability. She has a turning circle radius worse than some battleships, exacerbated by a middling rudder shift time. This can cause considerable difficulty trying to negotiate areas with a lot of islands and obstacles at speed, and also makes it hard to dodge shells and especially torpedoes.

Kirov does have a fairly good anti-aircraft suite that somewhat offsets this, however. It also uses the same torpedoes as the Gnevny-class destroyers. Their short range and high speed make them a situational weapon at best.

This combination of high speed, poor maneuverability, poor armor, and excellent guns with long range mean that Kirov works best at stand-off distances. It is very risky to play Kirov at close ranges, especially against enemies with torpedoes.

Note: As of Update 9.5, Kirov is now a Premium ship whose hull characteristics are an amalgamation of what used to be the stock (A) and researchable (B) hulls. It combines the aviation facilities and anti-aircraft suite of (A) Hull with all other characteristics being derived from (B) Hull along with granting access to both catapult aircraft and Hydroacoustic Search simultaneously.

As a premium ship, Kirov doesn't have any upgrades to research.

The recommended upgrades for Kirov are as follows:

Kirov can equip the following consumables:

As a premium ship, Kirov comes with Default permanent camouflage and a set of permanent combat bonuses.

Kirov (Russian: Киров) was a Project 26 Kirov-class cruiser of the Soviet Navy that served during the Winter War, World War II and into the Cold War. She attempted to bombard Finnish coast defense guns during action in the Winter War, but was driven off by a number of near misses that damaged her. She led the evacuation of Tallinn at the end of August 1941, before being blockaded in Leningrad where she could only provide gunfire support during the siege of Leningrad. She bombarded Finnish positions during the Vyborg–Petrozavodsk Offensive in mid-1944, but played no further part in the war. Kirov was reclassified as a training cruiser on 2 August 1961 and sold for scrap on 22 February 1974.

Ships of U.S.S.R.
Cruisers
Retrieved from "http://wiki.wargaming.net/en/index.php?title=Ship:Kirov&oldid=319740"
Categories:
Your location:
To log in, select the region where your account is registered
CIS Europe North America Asia
Or use Microsoft Login to enter WoT XBOX ecosystem
Log in