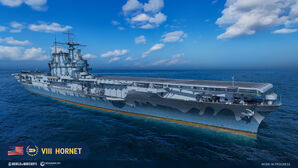 One of the Yorktown-class carriers—warships with well-balanced characteristics that predetermined the evolution of this ship type in the U.S. Navy during the 1940s.

USS Hornet is a premium American aircraft carrier with a large plane hangar and a tactical bomber squadron. However, the carrier's primary strike wing consists only of torpedo bombers and AP Dive Bombers. With these squadrons, Hornet is most effective against larger ships. All in all, Hornet’s planes hit hard, and are only hindered in combat effectiveness by her slower plane speed.

North American B-25 Mitchell
These tactical bombers are Hornet’s defining air group. Each strike consists of six planes with four high explosive bombs each. Like the Royal Navy level bombers, it is almost impossible for destroyers to dodge all of the 24 bombs if lead appropriately. As each bomb deals 2433 damage, even a single hit will heavily damage a destroyer and lucky strikes will cripple them. The high explosive bombs also have 42mm of penetration and high fire chance, making them very effective on capital ships. Expect good strikes to deal upwards of 20,000 damage, not including subsequent fires. Finally, despite their low maximum speed - even with engine boost - their high health lets them punch through most anti-air auras with ease. As a tactical squadron, these bombers come with unlimited reserves, but also a long three-minute preparatory delay. Unlike the tactical squadrons of supercarriers Eagle and United States, Hornet’s tactical squadrons will recharge their engine boost in flight. Despite these drawbacks, the B-25 Mitchell remains the most powerful strike squadron in Hornet’s arsenal. Captains should prioritize using this squadron whenever possible, mixing in other squadrons between tactical strikes.

Douglas TBD Devastator
These torpedo bombers are the more powerful of Hornet’s two standard squadrons. With eight planes per squadron and four per attacking flight, each strike drops four Mk.7 torpedoes. Like most US Navy torpedoes, these torpedoes have a slow base speed of only 35 knots. However, they make up for this with decent damage per torpedo (4667), a short arming distance, and a decent flood chance. Like Ranger, the torpedoes aim very quickly, which makes landing two consecutive attack runs relatively easy, especially with the in-flight repair active. Due to their high efficiency against capital ships, captains should prefer using torpedoes instead of dive bombs whenever the tactical squadron is unavailable.

Douglas SBD-5 Dauntless
These dive bombers are Hornet’s weakest air group, and mostly suited for attacking capital ships. With two flights of five aircraft per strike squadron, each attack run drops 5 armor piercing bombs, and deals up to 18 thousand damage. Unlike the German carrier Manfred von Richthofen, Hornet’s AP bombs have an excellent penetration on paper - 328mm worth - with good dispersion. However, unlike most AP bombers, Hornet’s bombers drop like Royal Navy carpet bombers, resulting in poor bomb hit angles. This reduces the likelihood of penetrating citadel armor and greatly increases the chance of ricochets. The small diameter of the bombs prevents them from overmatching 16mm superstructure plating. A long fuse time combined with a relatively high arming threshold (30mm) also makes these bombs ineffective against ships with low freeboard or thin citadel decks.

Because of these traits, captains should avoid using these planes in most situations. The poor hitting angle, small bomb diameter, and high arming threshold make them unreliable against most ships, and the low damage of each bomb results in poor damage on normal penetrations.

As a premium ship, Hornet has no module upgrades to research.

It is recommended to use Alexander Ovechkin for improved Survivability Expert.

Hornet comes with Type XX permanent camouflage that lowers her detection radius, reduces the accuracy of incoming shells, reduces her service cost, and increases the amount of experience she earns.

As a carrier, Hornet has no risk of detonating.

Ships of U.S.A.
Aircraft Carriers
Retrieved from "http://wiki.wargaming.net/en/index.php?title=Ship:Hornet&oldid=318144"
Categories:
Your location:
To log in, select the region where your account is registered
CIS Europe North America Asia
Or use Microsoft Login to enter WoT XBOX ecosystem
Log in