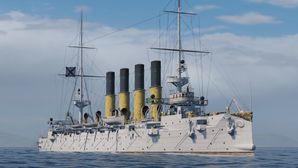 One of the most famous cruisers in the Imperial Russian Navy. Built in the U.S. under a one-off project that was based on the same technical design used for the construction of cruiser Bogatyr. The ship had a very high speed for her time and carried numerous rapid-fire main and secondary guns.

Varyag was first released for sale worldwide on 27 April 2018 and was also obtainable via a series of in-game missions.

Varyag is one of a multitude of premium Russian cruisers in World of Warships, and the third at Tier III (the others being Oleg and Aurora). Varyag possesses similar characteristics to the two other premium Tier III's, which in turn are very similar to the tech tree Tier III, Bogatyr. As such, Varyag shares a similar play style.

Like most Tier III cruisers, Varyag is not the quickest ship, with top a speed of 25 knots. Varyag does however have a quick rudder shift time of 6.6 seconds, which allows captains to quickly "wiggle" themselves out of the way of incoming shells, or into a better angle in hopes of bouncing or ricocheting armor piercing shells.

Varyag was historically a "protected cruiser"; in-game her armor is decent, but again, like most Tier III cruisers, is nothing to write home about. It will be sufficient against cruiser- and destroyer-caliber armor piercing ammunition when angled, but will be next to useless against battleship AP. Captains should not rely on her armor to save them; her mobility and ability to strategically place herself are better options.

Her guns are of a large caliber (152 mm), and have the characteristics to match; slow reload, high damage, high shell arc, and good penetration. Both her high explosive and armor piercing ammunition are usable, and captains are encouraged to switch ammo types as the situation changes. Her high shells arcs make hitting targets at range challenging, but also allow for strategic positioning of the ship behind low-lying islands. Her large number of guns on either side allow her to easily switch between targets without having to wait too long for the guns to traverse.

Despite having generally worse statistics than her three Tier III Russian cruiser counterparts, Varyag remains a passable ship. There is nothing spectacularly good or bad about her, and can serve her captain well when played to her strengths.

As a premium ship, Varyag doesn't have any modules to research.

The recommended upgrades for Varyag are as follows:

Varyag can equip the following consumables:

As a premium ship, Varyag comes included with Type 9 camouflage that lowers her detection radius, reduces the accuracy of incoming shells, reduces her repair costs, and increases the amount of experience she earns. 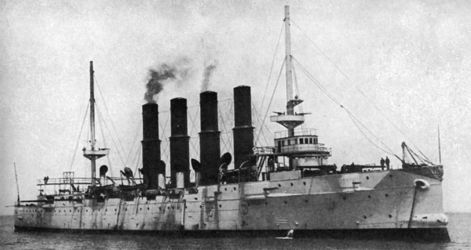 Cruiser Varyag was a continuation of the plan to bolster the cruiser force of the Imperial Russian Navy after the last of the Pallada-class was laid down in 1897. This initiative would later go on to spur the construction of cruiser Askold and the Bogatyr-class cruisers. Interestingly, Varyag was one of the few Russian cruiser designs contracted to an American shipyard; it was more common for the Imperial government to turn towards a European country for foreign contracts. The four-funneled, twin-masted, protected cruiser was typical of its time, with the goal of being an improvement over its predecessors.

Being of slightly lighter displacement than the Pallada-class, the ship had a clean silhouette with her main deck running all the way through to the main mast at the stern. Regardless, she managed to pack in a total of 30 water-tube boilers, feeding to two multi-expansion steam engines. The eight extra boilers in comparison to the Pallada-class generated about 21,000 shaft horsepower, giving a top speed of 23 knots: 4 more than her predecessors.

As a protected cruiser, Varyag was reinforced only to cover her vital spaces. She had 1.5 inches along the armored deck, with the slopes increased to 3-inch. The conning tower was made of 6-inch plate, and the housings for the ammunition hoists were also 1.5 inches. There were 3-inch plates in the bow and stern for further protection.

Varyag carried the same main armament standardized for other Imperial Russian protected cruisers: 152mm Canet guns. She carried 4 more than the previous classes, though, for a total of twelve. Four were arranged in unarmored mounts split between the fore and aft: a pair of single mounts placed in tandem. The other 8 were placed in armored sponsons on the flanks of the upper deck level, with four by the mainmast and four by the foremast. Secondary armaments considered of twelve 75mm guns; eight 47mm guns; and two 37mm guns, all in single mounts. Furthermore, there were six torpedo tubes and 22 mines.

Cruiser Varyag was laid down on October 1898 by William Cramp and Sons in Philadelphia, Pennsylvania in the United States. Launched a year later, she was commissioned into the Imperial Russian Navy on 2 January 1901.

Varyag joined the Imperial Russian Navy on 2 January 1901 after sailing across the Pacific to become part of the Russian Pacific Fleet. Her first — and final — battle was the Battle of Chemulpo Bay, off the coast of present-day Incheon, Korea, in 1904. This battle was one of the early conflicts of the Russo-Japanese War, where Russian and Japanese disputes over who controlled Korea and Manchuria resulted in armed conflict. Chemulpo Bay was a vital port, being the main port of Korean capital Seoul. Six Japanese cruisers and eight torpedo boats approached Chemulpo Bay; the only Russian occupants of the port were Varyag and the aging gunboat Korietz.

The captain of Varyag, Vsevolod Rudnev, received an ultimatum from Japanese Admiral Uryu Sotokichi on 27 January 1904. The ultimatum simply stated that hostilities had commenced between Russia and Japan, and that Rudnev had until 9 February to leave the port. On 8 February, however, the numerically superior Japanese force surrounded the port. Rudnev decided that Varyag would fight her way out and make a break for the open seas. That same day, Korietz spotted the Japanese protected cruiser Chiyoda, and upon mistaking her for a Russian ship, closed in and loaded her guns for a salute. Upon closer inspection, Korietz realized her mistake and in the ensuing confusion her guns were discharged. Chiyoda responded by launching a 356mm torpedo; both sides missed, but the exchange constituted the first shots fired in the Russo-Japanese War.

Diplomacy ultimately failed. At 1100 hours on 9 February 1904, Rudnev — at the con of Varyag — opted to break for the open sea alongside Korietz. By 1145, the Russians and Japanese began exchanging fire. One of the first shells to strike Varyag hit the port side of her bridge, killing a third of her bridge personnel. Shortly after, her #3 152mm gun was hit and taken out of action. That same shell lit a fire on her bow quarterdeck, damaging 152mm guns #8 and #9, as well as 75mm #21, and 47mms #27 and #28. Continuing to take heavy damage from the Japanese warships,Varyag continued in a straight line until she had sailed outside the effective range of her guns. However, she failed to break past the Japanese fleet, and limped back to Chemulpo alongside Korietz. Korietz was scuttled by blowing up her powder-rooms late in the afternoon. Fragments of the ship landed dangerously close toneutral vessels in Chemulpo, and Rudnev was urged by locals and captains of the neutral vessels not to scuttle Varyag in a similar fashion. With the exception of her 37mm guns, every single weapon on-board Varyag was out of action, and at 1800 hours that evening, she was scuttled by her crew in a non-explosive manner.

Despite being severely damaged, Varyag was still relatively intact, and was later re-floated by the Japanese and incorporated into the Imperial Japanese Navy as a third-class cruiser under the new name of Soya. Soya joined the IJN on 9 July 1907. She served as a training cruiser, including making a long-distance navigational and officer cadet cruise to Hawaii and North America, repeating this yearly from 1909 to 1913. During World War I Russia and Japan were allies, and, as a sign of good will, Soya along with several other ex-Russian vessels were returned to the custody of Imperial Russian Navy. She was deemed too crippled to be of any use, however, so she set sail for Britain for an overhaul. Shortly after arriving in Britain, the 1917 Revolution broke out in Russia, and Varyag became stuck in Liverpool, with no money to pay for her repair and refit.

On 8 December 1917 she was seized by the British military, and was later assigned to the Royal Navy in early 1920. She was stripped of her weapons and sold for scrap. On 5 February 1920, while under tow to the scrapyard in Germany, she ran aground near the village of Lendalfoot, Scotland in the Firth of Clyde. Unable to break her loose from the rocks, she was scrapped in-place between 1923 and 1925.

The heroism of Varyag’s crew during the Battle of Chemulpo Bay remains the stuff of legend in the Russian Navy. A poem and song were composed about the events of the battle; the song remains popular today. In 1907, Captain Rudnev was awarded the Order of the Rising Sun by the Japanese in recognition of his gallantry; dismissed from Russian service by that time, he accepted the honor, but never wore the award in public. In 2006, residents of Lendalfoot erected a monument to Varyag along the coastline where she met her final fate, displaying one of her anchors and a memorial plaque; moved by the gesture, the Russian people added a plaque of their own design to the site a year later.

Ships of U.S.S.R.
Cruisers
Retrieved from "http://wiki.wargaming.net/en/index.php?title=Ship:Varyag&oldid=314994"
Categories:
Your location:
To log in, select the region where your account is registered
CIS Europe North America Asia Republic of Korea
Or use Microsoft Login to enter WoT XBOX ecosystem
Log in