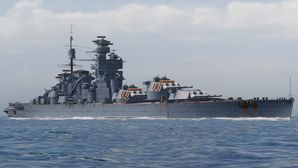 One of the variants of a high-speed battleship with a 406 mm battery (Project 21), developed under the "Big Fleet" program. A distinctive feature of the Project was the concentration of the main battery turrets in the ship's bow.

Lenin is the the first Tier VIII Premium Russian battleship to be introduced into Word of Warships, and the sixth all-guns-forward battleship in the game. Unlike the French battleships that are equipped with two quadruple forward turrets, Lenin nicely fills the tier gap between the British Nelson and Japanese Izumo, and the Russian variant of this unique design shares many of the same characteristics, flaws, and playstyles of the other two vessels. Captains familiar with either of the other two should find Lenin to be a similar experience.

Lenin comes armed with nine 406 mm guns, mounted in three turrets, all of which are mounted close together on the bow of the ship. Combined with the unique dispersion formula for Russian battleships, the tightness of the shell groupings can be truly frightening to see; especially so if on the receiving end. Lenin pays for her increased close-range accuracy by having the longest reload time of all Tier VIII battleships, and by having a fairly short maximum firing range. Furthermore, her turret faces are rather un-angled and fairly thin, so receiving incapacitations to them is a common occurrence. She does, however, possess a 360° second turret and very fast turret rotation speed, also typical of Russian battleships. The already-fast main turret traverse can be improved even more with a special Commander such as Alexander Ovechkin.

As for protection, Lenin has the normal 32 mm of plating, but a fairly well-armored midsection; 50 mm upper belt and a 45 mm deck. She also possesses a 100 mm strip of armor along the waterline of her bow. She has an above waterline citadel, so captains should be wary of showing too much side to enemy battleships. With her unique turret setup and quick turret traverse, staying perfectly angled to the enemy while being able to bring all guns on target is quite easy. However, like with Nelson and Izumo, if Lenin can get all nine guns on target, she is probably not angled enough.

Overall, Lenin is a formidable Tier VIII battleship. Her turret setup and convenient turret rotation speed easily allows her to maintain proper angling while keeping her guns in action, and her armor is more than enough to keep her alive while doing so. Captains looking for either a unique ship or a competitive experience can find both in Lenin.

As a premium ship, Lenin doesn't have any upgrades to research.

The recommended upgrades for Lenin are as follows:

Lenin can equip the following consumables:

As a premium ship, Lenin comes included with Type 10 camouflage that lowers her detection radius, reduces the accuracy of incoming shells, reduces her repair costs, and increases the amount of experience she earns.

Ships of U.S.S.R.
Battleships
Retrieved from "http://wiki.wargaming.net/en/index.php?title=Ship:Lenin&oldid=316580"
Categories:
Your location:
To log in, select the region where your account is registered
CIS Europe North America Asia
Or use Microsoft Login to enter WoT XBOX ecosystem
Log in