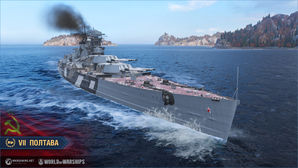 A Type B battleship project equipped with 356 mm guns was developed simultaneously with a larger Type A battleship. The main purpose of the ship was to oppose enemy cruisers and Scharnhorst-class battleships.

Poltava is a premium Tier 7 Soviet battleship that takes several departures from the techtree vessels of the same nation and class, especially its direct non-premium counterpart Sinop. While it still enjoys good armor protection for a Tier 7 battleship, though marred by a large, above-the-water citadel block, the major difference between Poltava and its techtree sisters lies in its main armament. Whereas Sinop and above use 406mm guns, culminating with Kremlin's massive 457mm armaments, Poltava uses 3x3 356mm rifles - the same caliber used in Tier 6 by techtree Soviet battleship Izmail. For Tier 7, this is a rather underwhelming caliber as it is unable to overmatch 25mm of armor with AP, a frustrating limitation when considering that most higher tier ships have 25mm or thicker common plating, such as bows/afts. The turrets are also less armored compared to the ones used by techtree Soviet battleships, making them easier to disable or outright destroy. That said, Poltava still enjoys rather decent HE shells with a good fire chance, as well as excellent AP penetration and shell velocity, among the best in the game for its gun caliber.

Poltava also enjoys better concealment and somewhat better accuracy at range compared to techtree Soviet battleships, which makes the ship overall more suited to conventional mid-long range engagements. This is the major difference between Poltava and its sisters - whereas Soviet battleships do well in brutal close range engagements, Poltava should play more conservatively and not actively seek brawls.

As a premium ship, Poltava doesn't have any upgrades to research.

The recommended upgrades for Poltava are as follows:

Poltava can equip the following consumables:

As a premium ship, Poltava comes with Regular permanent camouflage and a set of permanent combat bonuses.

Poltava represents the project 64 battleship design in 1937 put forward by Mikhail Vladimirovich Viktorov as part of the ocean going fleet program. The Design was based off of the UP.41 italian battleship design, which was the basis for the Littorio class. The design was to be 53,000 Tons, armed with 9 356mm guns and a top speed of 29 knots. Project 64 was designed to counter the French Dunkerque and Scharnhorst classes.

Ships of U.S.S.R.
Battleships
Retrieved from "http://wiki.wargaming.net/en/index.php?title=Ship:Poltava&oldid=318775"
Categories:
Your location:
To log in, select the region where your account is registered
CIS Europe North America Asia
Or use Microsoft Login to enter WoT XBOX ecosystem
Log in