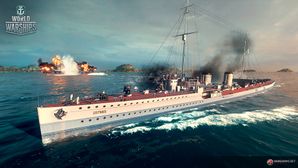 An original project for a unique large destroyer that was created during World War I to remedy the lack of modern cruisers in the Russian Navy. The ship's dimensions — too big for this type — allowed her to carry multiple guns and torpedo tubes.

Okhotnik is a Tier V Russian destroyer that is the living embodiment of the phrase "anything worth doing is worth overdoing". She features seven main guns in single turrets, as well as twelve torpedo tubes in four triple-tube launchers.

In many ways, Okhotnik is what one might expect if the low tier Russian destroyers were scaled up in size, with more guns and torpedoes. However, Okhotnik's guns fire slowly with a base rate of fire of only 6 rounds per minute, while their base 180 turret traverse time is 32.73 seconds, meaning she can easily out-turn her turrets. Her torpedoes are 450mm size, featuring 13,666 damage, a range of 4.5 km at 62 knots, and a stock reload of 47 seconds per launcher. Okhotnik takes the alpha strike of the low tier Russian destroyers to the extreme, and pays for it in weapon reload and mobility. She bleeds large amounts of speed in turns, and feels sluggish to accelerate again. Her large size also means she takes large amounts of damage from incoming fire.

Due to her rather short ranged torpedoes and heavy hitting guns, she excels at surprise attacks (using smoke and/or islands to close with an enemy). She does decently at longer ranges but her torpedoes are her biggest source of damage; developing tactics to deploy them well — or recognizing when a situation allows for their use — is key to getting maximum performance out of Okhotnik. She is an amusing destroyer to play if one likes to unleash large alpha strikes onto one's enemies.

As a Premium ship, Okhotnik has no module upgrades to research.

The recommended upgrades for Okhotnik are as follows:

worthwhile in Slot 3, as it provides a notable increase in turret traverse speed for only an extra 0.5 second increase in main battery reload time.

As a premium ship, Okhotnik comes with Default permanent camouflage and a set of permanent combat bonuses.

In early 1917, the Imperial Russian Naval Technical Board recognized the need to introduce high-speed “cruiser-killers” into the Baltic Fleet, in order to counter the increasing threat of Imperial German capital-ships. After further consideration, it was decided to focus upon a destroyer platform for the new project, as destroyers are relatively inexpensive to construct and re-arm to sizeable numbers. Further specifications outlined the role these new “destroyer-suppressors” were to play: anti-capital ship combat, high-speed reconnaissance, and mine-laying abilities; in short, a light multi-purpose high-speed warship. For all intents and purposes, what we consider to be the roles of modern destroyers. The future of this project fell to the charge of Colonel R. A. Matrosov.

In order to cut down design time, the team decided to modify an existing design present in the Russian Navy, as opposed to constructing a new vessel from scratch. The vessels in question were the Gavriil-class destroyers, a subclass of the much larger Novik-class destroyers. In order to produce more deck-space to mount more artillery, the vessels were planned to be increased a length of 30 meters to 130 meters total. In order to maintain hull integrity, the number of transverse bulkheads increased from 12 to 20, and the outer metal frame was increased to 10mm in thickness. Overall, this increased her total displacement to 2,100 tonnes.

Arguably, her most important characteristic was her main artillery, as Okhotnik was to serve as a detergent to any hostile force. As such, she was to be armed with no less than eight 130mm/57 B7 rifles; the same rifles seen mounted on the Svietlana-class cruisers. Interesting to note, the guns were not placed on top of their respective magazines, they were instead mounted on top of the bulkheads to ensure greater foundational stability for the heavy guns. Furthermore, as “destroyers” based upon the Gavriil-class, Okhotnik was to be fitted with the 3 triple torpedo launchers found on the aforementioned ships.

Albeit as an afterthought, Colonel Matrosov decided to mount the power plant of the Gavriil-class onto Okhotnik as well; 4 boilers connected to 2 turbines. As accordance to the calculations conducted by the design team, they predicted the 35,000 shaft horsepower output of the engine machinery to be sufficient to propel the craft up to 34 knots of speed.

The design was finalized by late 1917 and presented to the Board. To their astonishment at the outlandish proposal, many were quoted to calling her a “hunter” or a “killer”, and the name forever stuck. Considering top-weight in mind, the Board recommended to downscale guns 2 through 6 to 102mm. With their approval almost in hand, the mechanical advisors intervened with major criticisms. They were concerned that the proposed machinery would never be able to propel the heavier Okhotnik to Matrosov’s ambitious speeds. Matrosov remained bold and suggested mounting the 50,000 shaft horsepower power plant of the Svietlana-class cruisers, but that would require major redesigns and a divergence of limited resources. Thus, the proposed design would never come to fruition.

Okhotnik was an ambitious design; many would consider her ahead of her time. A destroyer that was more so a light cruiser by form, she attempted to merge the flexibility of a larger capital ship into compact construction. The problem of fitting high-power propulsion into a compact chassis was not successfully solved until post 1940s, when propulsion technologies advanced to the point where it was feasible to mount superheated boilers and multi-gear turbines into a hull the size of a destroyer.

The real Okhotnik was a torpedo cruiser (reclassified as destroyer in 1907) that was built in 1905 and sunk after striking a German mine in the Gulf of Riga on 26 September 1917. Four ships of the Okhotnik-class were built.

Ships of U.S.S.R.
Destroyers
Retrieved from "http://wiki.wargaming.net/en/index.php?title=Ship:Okhotnik&oldid=322724"
Categories:
Your location:
To log in, select the region where your account is registered
CIS Europe North America Asia
Or use Microsoft Login to enter WoT XBOX ecosystem
Log in