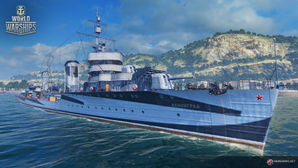 Leningrad may initially seem like a Tier VII Gremyashchy with an extra gun and quadruple torpedo launchers (instead of triples). Her 43 knot top speed (reaching nearly 46 knots with Engine Boost

active) means she can avoid some incoming fire by simply outrunning it, and her high velocity guns give her the ability to pepper targets at range where she can not be reliably hit. However, she has a much wider turning circle in exchange for her higher top speed, causing her to drift when turning. This can sometimes lead to accidentally hitting torpedoes her captain thought they had dodged.

Overall, Leningrad trades a worse gun layout from the regular tech tree Tier VIII destroyer Kiev for better torpedoes, making her an interesting hybrid play style ship, able to both function as both gunboat and torpedo boat depending on what the situation calls for.

As a Premium ship, Leningrad doesn't have any upgrades to research.

The recommended upgrades for Leningrad are as follows:

With only four upgrade slots to fill, there isn't a lot of variety of choice for fitting out Leningrad. Main Armaments Modification 1 is the natural pick for Slot 1'; for Slot 3, the choice boils down to captain's preference between Aiming Systems Modification 1 to improve the accuracy of her main battery, or Main Battery Modification 2

for faster turret rotation. Captains who have opted for Last Stand over Expert Marksman as a Level 2 commander skill will probably want the latter.

Remaining upgrade slots are best used for Engine Room Protection and Propulsion Modifications 1, in order to increase the reliability of her engines. Leningrad is dependent upon her speed for defense; these two mods help contribute to her survivability in that regard.

As a premium ship, Leningrad comes with Default permanent camouflage and a set of permanent combat bonuses. 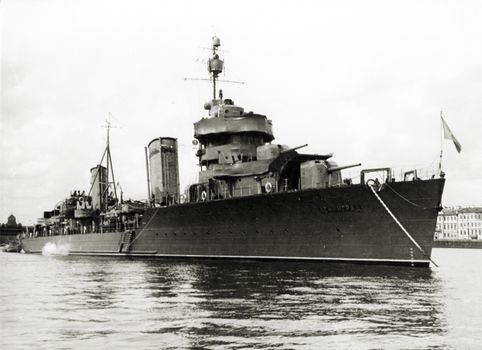 Ships of U.S.S.R.
Destroyers
Retrieved from "http://wiki.wargaming.net/en/index.php?title=Ship:Leningrad&oldid=319710"
Categories:
Your location:
To log in, select the region where your account is registered
CIS Europe North America Asia
Or use Microsoft Login to enter WoT XBOX ecosystem
Log in