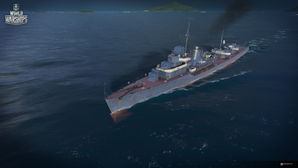 Gnevny was the first in a series of destroyers built in the U.S.S.R. (Project 7). She had good performance characteristics and very high speed and became the backbone of the Soviet Fleet during WW2. She outmatched the majority of foreign destroyers in terms of artillery firepower. Later, a Project 7U was introduced to improve engine and seagoing qualities but lacked good AA protection, which was constantly improved during the WW2.

Captains who have played this far into the Soviet destroyer should be well-versed in the tactics of Tier VI's Gnevny: keeping the range open from her primary targets, and pound away at them with her guns.

Keys to victory in Gnenvy include avoiding close-range combat with equal or higher tier American destroyers, as their rate of fire and turret traverse put her at a disadvantage. If corned by an American destroyer, pop an Engine Boost

consumable and open the range as quickly as possible; Gnevny’s guns can still hit targets outside of 7km, while American destroyer gun ballistics make it a challenge for them to hit quickly moving targets at range. Dealing with any Japanese destroyers — if they are spotted — should not be a problem; their guns have a worse rate of fire, though they have very potent torpedoes, so captains are encouraged to stay alert.

Gnevny’s torpedoes are really only useable where cover (such as islands or smoke) allows her to close to point blank range with unsuspecting targets, or in straight up suicide charges against enemy ships. Captains who do manage to get close enough to use them, though, will inflict crippling damage, as they hit incredibly hard and move fast.

Quickly research either Hull (B) for better rudder shift and increased health pool; then research the Gun Fire Control System VI mod. 2 for better range. The upgraded Torpedoes module is optional if low on credits, as it provides only an additional 5 knots to torpedo speed — despite being already very fast for short ranged torpedoes — and are unnecessary to unlock Minsk.

The recommended upgrades for Gnevny are as follows:

The starting point in the creation of destroyers of Project 7 was the creation of a Tactical-Technical Requirement (abbreviated in Russian as "TTZ") for the design of a destroyer to replace the obsolete Novik class ships. This TTZ was reviewed by the Technical Administration of the Red Army Navy in October 1929. Initially, the appearance and elements of the new destroyer were very much like Novik: displacement of 1,300 tons, 100mm main battery guns, with speed increased to 40 knots and the torpedo caliber upsized to 533mm (instead of the previous 450mm).

Design studies for the new destroyer line lasted for more than three years. There were many disagreements at different administrative levels throughout the design process, due partly to the views of Soviet leadership on the role of the Red fleet and the general development of naval equipment. The chief concern of the project from the very beginning was the conflicting requirements for the new ship: on the one hand, they had to be small and cost-effective to build; on the other hand, they must also be state-of-the-art when compared to foreign navies. In addition, many personnel responsible for the project came to the conclusion that without the input of advanced foreign experience the Soviet Navy was unlikely to quickly develop a destroyer design fit for large-scale construction.

In the summer of 1932, a delegation of representatives from the Soviet Navy traveled to Italy. There, their attention was focused on two very advanced Italian destroyer designs: Folgore and Maestrale. It was Maestrale that eventually inspired the design of the Gnevny-class destroyers. Italian firm Ansaldo accepted an offer of cooperation, since Italy was (at that time) an important military-political ally of the Soviet Union. Ansaldo provided a great deal of technical documentation, as well as allowed Soviet design engineers to study the technology of building ships at their shipyards.

In October 1932, the Revolutionary Military Council approved the design concept of a destroyer with a standard displacement of 1,300 tons, in which the characteristics of future destroyers of Project 7 were already visible: armament of four 130mm and three 76mm guns, two triple-tube 533 mm torpedo launchers, a maximum speed of 40-42 knots, and an operational range of 360 nautical miles at full speed (or 1,800 nautical miles at a much lower cruising speed). The Gnevny class would also displace less than Folgore or Maestrale, though the Soviet destroyer would exceed the armament and speed of its Italian brethren.

The design of the Gnevny class was included in the large Soviet naval shipbuilding program for 1933-1938. Funding was approved on 11 July 1933 by the Council of Labor and Defense; it provided for the construction of 1,493 combat and auxiliary ships, including 8 cruisers and 50 destroyers.

Soviet designers borrowed the layout of the engine and boiler plant from Maestrale, as well as the general architecture of the ship; however, the domestically-supplied armament, machinery, and equipment, forced some significant departures from the Italian designs. Consequently, the influence of the Italian designs — short of providing documentation — was limited to the development of a theoretical blueprint (provided by Ansaldo) and the run of the model in the experimental basin in Rome.

The ultimate design of the destroyer, which received the name "Project No. 7", was approved by the Council of Labor and Defense in December 1934. The final technical characteristics of the project were a displacement of 1,425 tons, a top speed 38 knots, main armament of four 130mm guns, two 76mm anti-aircraft guns and two three-tube 533mm torpedo launchers, and a crew of 170 sailors. At that time, most of the equipment and weapons for the new project did not exist even on paper, and their weights and dimensions were only estimates. Moreover, there was no contingency built into the displacement calculations for the project, leaving a great deal of risk in the final weight and stability of the class.

Ships of U.S.S.R.
Destroyers
Retrieved from "http://wiki.wargaming.net/en/index.php?title=Ship:Gnevny&oldid=318448"
Categories:
Your location:
To log in, select the region where your account is registered
CIS Europe North America Asia
Or use Microsoft Login to enter WoT XBOX ecosystem
Log in