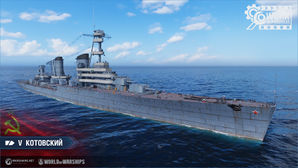 One of the first projects of a Soviet light cruiser armed with 152 mm guns. It was a conceptual step forward in comparison to the Svietlana-class ships in terms of her speed, gunfire control system, the arrangement of her main battery artillery, and the strength of her AA defenses.

If you are coming from Svietlana at Tier 4, then Kotovsky is going to have a bit of a learning curve in a few regards. While the ship introduces a centerline main battery layout common to the rest of the Russian cruiser branch, it also introduces the "glass cannon" low survivability of many of the Russian light cruisers and says goodbye to a one-tier "protected" matchmaking spread. The armor on Kotovsky is even worse than that of Kirov, the ship she replaces on the tech tree, with the citadel belt being only 35mm thick as opposed to 50mm on the latter and 75mm on the Svietlana. All is not doom and gloom however, as Kotovsky does have redeeming qualities which include rather high speed and good ballistics common among the Russian cruisers along with decent concealment relative to firing range. Captains new to the ship must utilize these key features to keep distance from the enemy, avoid prolonged exposure to return fire, and maximize mid to late-match combat viability.

At the end of the day, Kotovsky still makes some debilitating tradeoffs from Kirov for some very modest gains, in some regards, so it may not be worthwhile to obtain this ship if you own the latter. For some who owned Kirov prior to the 9.5 update, there may be a bit of a debate in regards to acquiring Budyonny. If you are finance-conscious or saving up for something else then re-grinding Tiers 4 & 5 to save Free XP and doubloons/real money is the better option, otherwise paying your way through to Tier VI with Free XP saves time. In either case only you, the player, can make such judgements.

Given the vulnerability of Kotovsky to incoming enemy salvoes, researching and equipping the upgraded Gunfire Control System should be your first order of business. This will yield a 3.8km difference in firing and detection ranges assuming no camo is equipped and the Concealment Expert commander skill is not taken.

The recommended upgrades for Kotovsky are as follows:

Kotovsky can equip the following consumables:

Ships of U.S.S.R.
Cruisers
Retrieved from "http://wiki.wargaming.net/en/index.php?title=Ship:Kotovsky&oldid=317617"
Categories:
Your location:
To log in, select the region where your account is registered
CIS Europe North America Asia
Or use Microsoft Login to enter WoT XBOX ecosystem
Log in