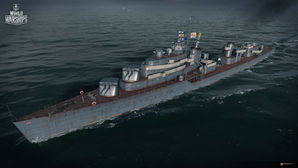 The design for a destroyer flotilla leader, created under the "Big Fleet" program (Project 48). The ship was developed from the first Soviet Leningrad-class destroyer leaders. Among ships of the same type, she boasted powerful armament and a very high speed.

Kiev is a significant upgrade over Minsk in many respects: she has significantly more firepower and improved torpedoes, to name two. Kiev excels at long-range harassment, and at closer ranges is capable of fighting against even cruisers with her excellent guns, if they are foolish enough to show their broadside.

Kiev uses the same 130 mm guns as Minsk and Gnevny, but now has a pair of superfiring turrets mounted on the front deck. This allows Kiev to still maintain respectable salvos without exposing her broadside, enabling her to pursue fleeing targets without sacrificing too much firepower. The excellent ballistics of the 130 mm guns mean that Kiev is much better at hitting long range targets than the competing American and Japanese destroyers. These do come in two salvos of five torpedoes with a very high speed, and if Kiev is able to get within range to use them, it is very difficult to avoid them.

With a blistering top speed of nearly 43 knots, Kiev is a lot faster than her same-tier competitors (such as Z-23, Benson, Kagero, and Akizuki). With the Engine Boost

consumable activated and a Sierra Mike (

) signal flag mounted, she is capable of even outrunning some torpedoes! There is no other ship in this tier which is capable of outrunning her. However, her maneuverability is not particularly outstanding, especially at high speeds. This can be a problem in close-range fights against other destroyers, especially when it comes to dodging torpedoes.

Interestingly, Kiev has a single dual-purpose secondary gun turret with two 85mm guns on Hull (B). The range is decent at 5.0 km but like all secondaries, they cannot be relied on in a close quarters brawl. She is one of the few destroyers in the game with secondary guns; the turret tends to get knocked out fairly quickly, but it is fun to watch while it's still functioning.

Finally, the Kiev also introduces the intriguing option of replacing her Smoke Generator

. Both are viable; while the value of smoke in getting out of bad situations and supporting the team is obvious, the sheer longevity provided by Repair Party cannot be denied either.

For a commander without Advanced Firing Training, it is recommended to get the Fire-Control System upgrade first, in order to increase the gun range as much as possible. Hull (B) should be purchased next.

The recommended upgrades for Kiev are as follows:

upgrades and has the Sierra Mike (

) signal equipped, are encouraged to replace the Propulsion Modification 1 upgrade, as it extends the Engine Boost

consumable duration by 50%, thereby allowing her to maintain a max speed of 48.2 knots for three minutes.

Kiev can equip the following consumables:

The second slot will really define how the captain plays this ship. The smoke provides the standard utility of team cover, retreating, and smoke firing. However repair offers a unique playstyle giving captains a survivability increase to assist their gun-fighting capabilities.

Ten ships were ordered from Soviet yards in 1939 as the Project 48 destroyer leaders. This design had minor modifications to suit Soviet shipbuilding practice. Four ships were laid down, all of them for the Black Sea Fleet.

Ships of U.S.S.R.
Destroyers
Retrieved from "http://wiki.wargaming.net/en/index.php?title=Ship:Kiev&oldid=324771"
Categories:
Your location:
To log in, select the region where your account is registered
CIS Europe North America Asia
Or use Microsoft Login to enter WoT XBOX ecosystem
Log in