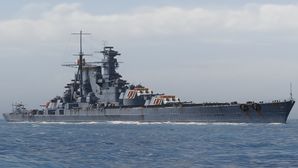 One of the variants of the "battleship A" project intended for construction in accordance with the Great Ocean Fleet concept creation. She had heavy armor, high speed, and aviation equipment.

Availability of researchable upgrades for Vladivostok is as follows:

The recommended upgrades for Vladivostok are as follows:

Vladivostok can equip the following consumables:

Players should be mindful that although the damage control team is very efficient, it can handle a limited number of incidents before becoming exhausted.

Vladivostok in World of Warships is based on KB-4’s design for a new battleship, designated “Battleship A”. The design was a preliminary version of what eventually became the Sovetsky Soyuz-class.

In 1935, Soviet shipbuilding began to take a keen interest in developing battleships. Preliminary specifications for both small and large battleships were sent to the Central Design Bureau for Special Shipbuilding No. 1 (TsKBS-1) during the same year, and in December TsKBS-1 sent early outlines for large battleships. These outline designs were then examined by the Navy’s Scientific Institution for Warship Construction (NVIK), which were further developed by the Navy Shipbuilding Department into two separate tactical-technical requirements (TTZ) — a “Type B” Battleship and “Type A” Battleship, the latter of which was assigned project number 23 and intended for operations in the Pacific. The specifications of Project 23 were as follows:

These specifications were passed onto the Design Bureau of the Baltic Works (KB-4), who deemed them too ambitious to be realized and ordered a new set of specifications. The new requirements, which reduced the speed to 30 knots, replaced the DP secondaries with a heavier 152 mm battery, and reduced the AA and belt armor, were approved in May 1935. Over the following months, a competition was held between KB-4 and TsKBS-1 for development of both Battleship A and the smaller Battleship B. At the same time, a study by the Naval Academy deemed 406 mm guns to be the most effective for the new battleships. This led to the displacement being reduced to 45,000 tons and the caliber fixed at 406 mm.

While these changes were happening, the Soviet Union opened negotiations with Great Britain for limitations in naval arms development. A bilateral agreement was reached — the Soviet Union would agree to the London Naval Treaty of March 1936, but since Japan refused to sign the London Treaty, the Soviet Union would not accept any limitations for their Pacific battleships. Instead, they would only give an advance warning to Britain if construction of battleships larger than 35,000 tons commenced. Work continued on Battleship A, with attempts to limit the displacement to 41,500 tons in order to not appear in gross violation of the treaty. In August 1936, a new TTZ was outlined for the battleship:

The design was influenced by the Ansaldo UP-41 design, which provided invaluable insight into hull and machinery but it was not considered a basis for the design.

In November 1936, both TsKBS-1 and KB-4 submitted their sketches for Battleship A and B, all of which considerably exceeded the 41,500 ton limit. A major difference between the sketches was their propulsion: KB-4’s used a three-shaft propellor system, while TsKBS-1 used a triple-screw arrangement. The former was a source of controversy, and proponents of a four-shaft plant argued against it. In the end it was Stalin himself who would vote in favor of a three-shaft plant.

Ultimately, the KB-4 design was selected for further development as Battleship A, while TsKBS-1’s design was chosen for Battleship B. At this point, KB-4’s lead designers were convinced that displacement would need to be increased to 53,900 tons to fulfill the requirements. This would be shot down, though modifications to increase the deck armor were approved, increasing the displacement to 46,000-47,000 tons. At the navy’s insistence, work for a 47,700 ton design was completed at the end of April 1937, but the designers still advocated for a larger ship - this time at 55,000 tons. On July 4, 1937, Stalin finally approved such a ship, and new requirements were outlined:

While this meant design work would have to restart — and during the Great Purge, which meant the loss of many ship designers -- KB-4’s design would continue to have its firepower and armor enhanced, eventually culminating in the Sovetsky Soyuz-class.

Ships of U.S.S.R.
Battleships
Retrieved from "http://wiki.wargaming.net/en/index.php?title=Ship:Vladivostok&oldid=322707"
Categories:
Your location:
To log in, select the region where your account is registered
CIS Europe North America Asia
Or use Microsoft Login to enter WoT XBOX ecosystem
Log in