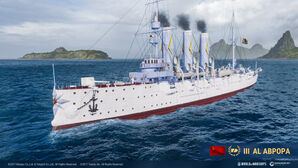 Avrora is a light Pallada-class cruiser and one of the oldest ships of the Northern Parliament. Her name means "dawn." From the Azur Lane game. AL Avrora was first released for sale on 27 May 2022.

AL Avrora is a clone of the Russian Tier III premium cruiser Aurora and thus comparable to other protected cruisers like III St. Louis and Bogatyr.

She carries fourteen 152mm guns in shielded single mounts, and can bring up to eight guns to bear on a target when fully broadside. While her 11.2km range is on the short side compared to her counterparts, her range is still usable with the shorter combat ranges of low tiers. Players should be aware that her shell arcs are rather high. AL Avrora suffers from her extremely slow speed, barely able to outrun most of her Tier III battleship counterparts and slower than almost all cruisers.

Overall, AL Avrora is a workable ship for players looking for a low tier premium cruiser. However, her sluggish maneuverability and lackluster guns may be frustrating for some players.

As a premium ship, AL Avrora has no module upgrades to research.

Players looking to train a commander for a higher tier tech tree or premium ship should consult that ship's page for skill recommendations. For players looking for a dedicated commander, skills should focus on improving AL Avrora's survivability and main battery performance.

As a premium ship, AL Avrora comes with Default permanent camouflage and a set of permanent combat bonuses.

Ships of U.S.S.R.
Cruisers
Retrieved from "http://wiki.wargaming.net/en/index.php?title=Ship:AL_Avrora&oldid=319749"
Categories:
Your location:
To log in, select the region where your account is registered
CIS Europe North America Asia
Or use Microsoft Login to enter WoT XBOX ecosystem
Log in