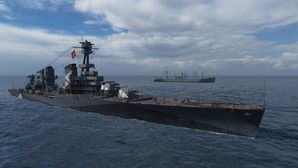 A cruiser project that preceded the creation of the Kirov-class ships. The main armament of the cruiser consisted of powerful 180 mm guns that were one of the first artillery systems developed in the U.S.S.R.

The Mikoyan can be quite troublesome to play with without knowing its strengths. Unlike most lightly armed soviet cruiser it has an anemic 6 guns and a long reload of 13 seconds. In comparison the Kotovosky has 8 guns with 10 second reload, making it the better fire starter. However, the ship is highly manuverable for its tier, allowing the player to easily angle the ship back and forth to use all of her guns. The bread and butter of the ship is her 180mm AP shells with great ballistics. Combined with the spotting plane, you can citadel broadsiding cruisers more than 16kms away. Using the ships's speed and maneuverability, it is imperative to catch enemy cruisers off guard at long distances. The ship has practically paper for armour and will be devastated if shown even the slightest broadside to enemey ships. So, play the ship safely at long distances. HE will be useful for nose in BBs, but won't burn them to death. Try to use the concealment and speed to flank them and use AP. Overall, it is a very thinly armoured ship with anemic guns but good long range AP.

As a premium ship, Mikoyan doesn't have any upgrades to research.

The recommended upgrades for Mikoyan are as follows:

Mikoyan can equip the following consumables:

Ships of U.S.S.R.
Cruisers
Retrieved from "http://wiki.wargaming.net/en/index.php?title=Ship:Mikoyan&oldid=317618"
Categories:
Your location:
To log in, select the region where your account is registered
CIS Europe North America Asia
Or use Microsoft Login to enter WoT XBOX ecosystem
Log in