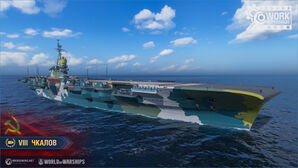 The project of a high-speed aircraft carrier armed with dual-purpose main battery artillery that was developed in the U.S.S.R. in the late 1930s (Project 71B).

Tier VIII premium Aircraft Carrier Chkalov retains many of the traits that define the Russian aircraft carrier line, having slow planes with high damage potential, slow plane regeneration time, and a large hangar size. She has three different types of planes, torpedo bombers, HE skip bombers, and HE dive bombers. While the planes have a low HP pool, this is mitigated by the fact that the skip bombers and torpedo bombers will endure less damage from continuous AA. This makes dodging flak the key to having success with this carrier.

Similar to her contemporaries, Chkalov is mostly covered with 25mm of armor making her vulnerable to large caliber A.P shells. However, she has a 30mm deck, which protects her from low caliber HE shells and Battleship shells up to 406mm in caliber.

Chkalov’s torpedo bombers consist of one squadron of 6 planes carrying one torpedo each. These torpedoes are moderately fast at 41 knots, with a large arming distance and a huge damage potential. This makes them most effective against large, unmaneuverable targets such as enemy battleships. It is not uncommon for one attack run to remove ⅓ of an enemy battleship’s hp pool.

Similar to her torpedo bombers, Chkalov’s skip bombers consist of one squadron of 6 planes carrying one bomb each. These bombs can bounce at three different distances, their dispersion improving as they move farther away from the initial drop point. These bombs Penetrate 32mm of armor, making them effective against ships of all classes. They are particularly effective against destroyers who lose a large percentage of their hp for each bomb hit.

Instead of Rockets, Chkalov has HE dive bombers similar to that of the Graf Zeppelin. Each squadron drops 6 bombs through a circular reticle. The delay between the start of the attack run and the drop is extremely short. These bombs are potent destroyer hunters, as they have the ability to start an attack run on a destroyer as soon as it is spotted and have enough time to drop it when the circle turns green.

With 6 planes per squadron on all three of her plane types, the allegorical significance is not lost on enemy battleships and destroyers. Captains should try to position as aggressively as possible (without risking their own hull) in order to reduce plane flight and recall times. This will make up for her slow plane speed. In addition, flak dodging is key to plane preservation, as her planes often finish their attack run outside of close range AA auras. Both aggressive positioning and flak dodging are skills that take time to learn. As such, experienced carrier captains will have success with Chkalov, while inexperienced captains may struggle to have meaningful impact in their matches.

As a premium ship, Chkalov has no module upgrades to research.

As a premium ship, Chkalov comes with Default permanent camouflage and a set of permanent combat bonuses.

Ships of U.S.S.R.
Aircraft Carriers
Retrieved from "http://wiki.wargaming.net/en/index.php?title=Ship:Chkalov&oldid=319758"
Categories:
Your location:
To log in, select the region where your account is registered
CIS Europe North America Asia
Or use Microsoft Login to enter WoT XBOX ecosystem
Log in