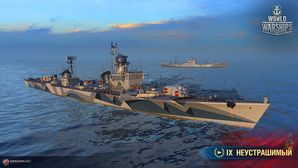 The first destroyer of the Soviet Navy designed and built after World War II (Project 41). A number of innovative solutions were used in the ship's design, including the most advanced torpedo tubes and the latest artillery mounts, which served both as dual-purpose main battery and AA defense.

Tier IX Premium Russian destroyer Neustrashimy is very similar to Tier X Russian destroyer Grozovoi in the regular tech tree. While Neustrashimy has one less turret than Grozovoi, Neustrashimy trades the missing firepower for better concealment. She is very much a jack-of-all-trades, marrying the gunboat aspects of the Soviet destroyer line with Japanese-like stealth and American torpedo performance.

The most obvious characteristic of Neustrashimy is her lack of main battery punch. With only four barrels, a Neustrashimy salvo lacks in power compared to the majority of her contemporaries at Tier IX. While the damage output is still passable, it means that captains will have to be more selective about when to use Neustrashimy’s main battery; she is decidedly not a ship that can bully capture zones early in a match. The turret layout is also something of an issue: with two turrets of two guns each, if one is knocked out her shell throw weight is halved. This makes module survivability skills and upgrades important; with so few guns each one matters a lot more.

On the other hand, Neustrashimy’s concealment is outstanding, besting even Tier X Japanese destroyer Shimakaze. Stealth this good is virtually unheard of among the Russian destroyer line. Neustrashimy can use her stealth to get in the face of enemies and launch her torpedoes, as well as sneak up to enemy destroyers and ambush them in the middle and late game. She may be under-gunned compared to most of the competition, but she deals enough damage to handle most other destroyers, and with her concealment advantage she will get the first few salvos off before most enemies can react. Her maneuverability is slightly better than that of Grozovoi, but she's still a bit more sluggish than some of her Tier IX counterparts.

Neustrashimy boasts some of the best torpedoes among all Russian destroyers. The reload is on the long side and they top out at a range of only 10.0 kilometers, but experienced captains will find plenty of ways to get work out of them. Her anti-aircraft suite is a touch worse than that found aboard Grozovoi — largely due to the lack of the third dual-purpose main battery turret — and she packs fewer 45mm barrels in her mid-range aura as well. With a little bit of investment, her AA suite will commonly dissuade enemy carrier planes from repeated attacks, but she will not be able to prevent the initial drop or two against determined carrier captains (even with Defensive AA Fire

The real strength of Neustrashimy lies in her consumables set. Like Grozovoi, Neustrashimy has a fantastic array of consumables that afford her a lot of flexibility. This allows Neustrashimy to play near the front lines, supporting pushes into objectives, whilst having options to deter or disengage from combat when it becomes unfavorable. If timed correctly, the combined use of Specialized Repair Teams

can increase her longevity in battle, where she can use her advantages to harass enemy counter-pushes, hunt down enemy ships, or steal back capture points at her leisure. In summary, this hybrid-platform allows a lot of freedom on the high seas.

As a premium ship, Neustrashimy doesn't have any upgrades to research.

The recommended upgrades for Neustrashimy are as follows:

Neustrashimy is essentially a slower, stealthier version of Grozovoi with one less turret and worse AA, captains can treat the destroyer in a similar manner albeit with some variation. A more 'generalist' build focusing on preserving the engine module and armament modules (especially since the destroyer only has two turrets) is advised, although the choice in Slot 6 will depend on if captains prefer to take advantage of her torpedoes or stick to improving the gunnery abilities of the ship.

Since Neustrashimy has access to the Defensive AA Fire

consumable, it is also possible to utilize an AA build with this ship. Captains pursuing this build should equip AA Guns Modification 1

into Slot 3, and if they are willing to sacrifice the potential boost to damage against ships, place Auxiliary Armaments Modification 2

in Slot 6 instead of upgrades to improve gun or torpedo battery performance. Coupled with the appropriate captain skills such as Basic Firing Training and/or Advanced Firing Training, as well as the November Echo Setteseven (

Key skills for Neustrashimy commanders include a similar to Grozovoi, due to their superficial similarity; with a higher emphasis on survivability. Due to Neustrashimy’s poise as a jack-of-all-trades, captains are at the liberty to tailor their skills to suit their play style, preferring guns or torpedoes as they see fit. Superintendent coupled with premium consumables is almost mandatory in order to get the maximum amount of utility out of the ship.

Neustrashimy can equip the following consumables:

Neustrashimy has an amazing array of consumables, making the Superintendent skill highly recommended on her commander. Extra charges of Defensive AA Fire

become indispensable to the utility and longevity of Neustrashimy.

As a premium ship, Neustrashimy comes with Default permanent camouflage and a set of permanent combat bonuses.

As a premium ship, Neustrashimy comes included with Type 10 camouflage that lowers her detection radius, reduces the accuracy of incoming shells, reduces her repair costs, and increases the amount of experience she earns.

), as these signals prove some passive benefit to Neustrashimy due to the addition of Defensive AA Fire 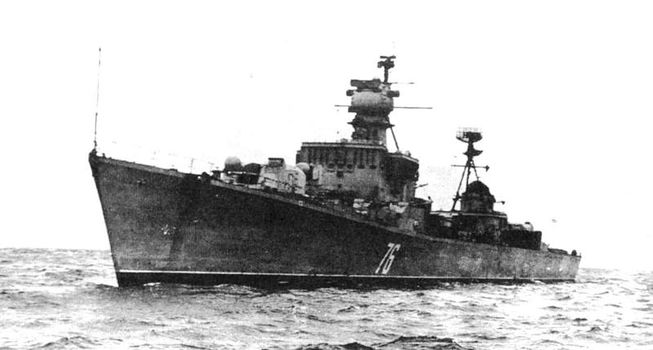 The idea of a multi-purpose destroyer came up as early as 1939, with the demand being that such a ship should be capable of engaging surface, air, and underwater targets effectively. The outbreak of the war however prevented further design work to be done until after the war. Work was picked up in 1946, yet it was not before 1949 when the final design of Project 41, Neustrashimy (Неустрашимый, "Dauntless"), was approved and the hull laid down.

With a 134m length and 13.4m beam, Neustrashimy displaced up to 3,810 tons under a full load. The hull of Project 41 was divided into fourteen watertight compartments with the possibility to flood individual compartments if so needed. The amount of superstructure was kept to a bare minimum, with only armament, funnels, and the forward superstructure being present, and in a similar manner, the number of portholes was reduced as much as possible compared to preceding designs. Up to 305 men would crew the ship.

Neustrashimy’s main armament consisted of four 130mm/58 SM-2-1 dual purpose guns mounted in two twin turrets, one fore and one aft. These guns could fire a 33kg heavy shell at ranges up to 27,700m, or against air targets at an altitude of almost 20km. Depending on whether or not the gun rammer was used, the reload of these guns varied between four and six seconds.

For anti-aircraft purposes eight 45mm/68 21-KM machine cannons were installed in four twin mountings, which were capable of firing up to 40 rounds every minute against targets 10.7km away or 6.4km high. Close range defense was covered by eight 25mm/79 110-PM guns in two quadruple mountings, firing on average 270-300 rounds per minute against surface targets 3km away, or air targets at an altitude of up to 1.7km.

Two quintuple Torpedo launchers were mounted on Neustrashimy, with a caliber of 533mm and no reloads being carried. Also provisions were made to allow up to 48 mines to be carried as well as 105 depth charges.

Neustrashimy’s machinery was divided into two separate sections, to decrease the risk of losing all engine power to a single hit. Two boilers each would feed steam to one turbine, to for a total power output of 64,200 shaft horsepower which would accelerate the vessel to a speed of up to 33.5 knots. Carrying up to 740 tons of fuel oil, Neustrashimy could reach a cruising range of 5,200 nautical miles while going 14 knots.

Even before Neustrashimy was commissioned, early trials concluded that her machinery was insufficient and would not meet the design power and thus the ship would not be able to reach her design speed. Further trials also revealed severe vibration issues, a wet foreship — which rendered the two fore 45mm mountings useless — and problematic behavior of the ship when going in reverse.

Following a few years of mostly publicity work, Neustrashimy was sent to be modernized in 1958. This modernization saw the removal of the 25mm guns, an upgrade to the 45mm guns (which replaced the twin mountings with quad mountings), the addition of missile armament to the vessel, as well as a modernization of the radar and sonar equipment. These upgrades would not be complete until 1960.

While Neustrashimy never saw actual combat, she was damaged during a friendly fire incident in 1969 when a Soviet destroyer accidentally fired at her, with one shell piercing the aft superstructure for no casualties.

Neustrashimy was withdrawn from active service on 25 January 1974, and ordered to be fully disarmed one month later. She spent an additional year being used to create films for the Soviet Ministry of Defense before finally being scrapped in 1975.

Ships of U.S.S.R.
Destroyers
Retrieved from "http://wiki.wargaming.net/en/index.php?title=Ship:Neustrashimy&oldid=319707"
Categories:
Your location:
To log in, select the region where your account is registered
CIS Europe North America Asia
Or use Microsoft Login to enter WoT XBOX ecosystem
Log in