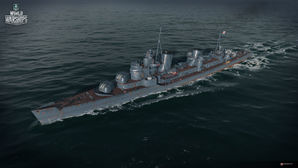 The ship was designed as a destroyer flotilla leader. No destroyer in the world could rival her in terms of speed, while her armour and the power of her artillery were comparable to those of light cruisers. Dual-purpose main guns and a battery of automatic AA guns ensured a strong AA defence.

The Khabarovsk is the epitome of the "running and gunning" method of Soviet destroyer leaders first introduced at Tier 5 with Podvoisky.

First: the running. Khabarovsk enjoys a top speed of 43 knots which, while outclassed by French counterpart Kléber, is still very remarkable and excellent for a gunboat. Adding the bonuses provided by the Sierra Mike (

consumable, this ship can reach a top speed close to 49 knots, making itself a frustrating target to hit at range. Khabarovsk also benefits from a very powerful engine and great acceleration. Unfortunately, while very fast in a straight line, the ship is sorely lacking in agility as her turning radius is large and her rudder shift is downright atrocious, meaning upgrades to improve it are all but mandatory to make Khabarovsk wiggly enough to dodge incoming fire, especially from high velocity guns (of which there's an abundance in Tier 8 and above). Also, while she can run, she cannot hide: Khabarovsk has the poorest concealment of all destroyers currently available in World of Warships, making the ship extremely easy to spot, especially if attempting to contest caps (something Khabarovsk is very bad at).

Next: the gunning. She fires the same shells as Tashkent at the same rate of fire per barrel; however, she gains a fourth turret, as well as a slightly higher muzzle velocity. Together this allows her to put a withering storm of fire on any target, and switch targets quickly as conditions dictate. Unfortunately, while her firepower is impressive, her gun range is sorely lacking and needs every available upgrade to keep Khabarovsk at a comfortable range from its targets.

While she does not have the range or maneuverability of Tashkent, she shares similar advantages of a very large health pool for a destroyer and access to Repair Party

consumable. Most notable, however, is the armour: Khabarovsk is the most heavily armoured destroyer currently available to players, with a 25mm thick deck and a 50mm thick midsection; this "chestplate" can shatter most cruiser HE shells, and at extreme angles, even bounce battleship AP shells. However, this and her large size for a destroyer can occasionally backfire, arming AP shells that would merely over-penetrate smaller, more lightly-armoured destroyers. Optimal angling will depend on the enemy guns and their shell selection. Note: Khabarovsk will only take full penetration damage from AP and SAP shells of 280 mm and below.

Her AA is fairly decent for a destroyer and can shoot down a few planes, but it is in no way enough to deter plane strikes, especially considering the lack of the Defensive AA Fire

consumable. That being said, the thickly armoured midsection of the ship can withstand some punishment from plane strikes without losing too much health, provided the player actively attempts to dodge plane strikes as well.

The torpedoes are mostly a situational curiosity. With a 6.0 km range they will see little use in the majority of games. They are also very slow at 53 knots - only slightly faster than the ship they were fired from! However, they do have one special feature: their detection radius is an amazing 0.6 km, meaning that a close pursuer or smoke camper without Hydroacoustic Search

active will have almost no chance to react in time. Their damage is also respectable, making them potentially lethal ambush weapons.

As a Tier X ship, Khabarovsk has no additional modules to research.

The recommended upgrades for Khabarovsk are as follows:

Captains who have the rare Engine Boost Modification 1

upgrade and have the Sierra Mike (

) signal equipped are encouraged to replace the Engine Room Protection

upgrade, as it extends the Engine Boost

consumable duration by 50%, thereby allowing her to maintain a max speed of 48.7 knots for three minutes.

Khabarovsk can equip the following consumables:

As a premium ship, Khabarovsk comes with Default permanent camouflage and a set of permanent combat bonuses.

) are the most recommended signals. Additionally, because Khabarovsk has access to the Repair Party

The Khabarovsk as it appears in World of Warships is a representation of the 1936 4500-ton Project 47 armored destroyer design.

[2] War Gaming Wiki Page on the Project 24 design the Khabarovsk is based on.

Ships of U.S.S.R.
Destroyers
Retrieved from "http://wiki.wargaming.net/en/index.php?title=Ship:Khabarovsk&oldid=322908"
Categories:
Your location:
To log in, select the region where your account is registered
CIS Europe North America Asia
Or use Microsoft Login to enter WoT XBOX ecosystem
Log in