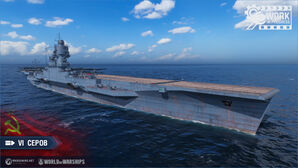 A light fleet carrier design based on the hull of the Project 68 cruiser that was developed in the U.S.S.R in the late 1930s (Project 71).

Serov, like other aircraft carriers in the Soviet tech tree, plays differently from the other aircraft carriers with the unique trait of attacking with all aircrafts in squadron at once. Making its potential alpha-damage very high. Like the other Soviet carriers, the hangar of Serov has the capacity to carry several squadrons of aircraft. The tradeoff comes with the lowest aircraft HP in the tier, and the attacking pattern means that each aircraft loses is a damage loss due to the generally low plane restoration time. While the survivability of the planes is bolstered by the fact that they will not need to spend so much time in the AA fire of enemy ships, the dodging of flak bullets is quintessential to prevent the squadron from being entirely destroyed, especially since the squadron has very few total hitpoints. Captains of Serov will be rewarded for using the right armament on the right target for maximum efficiency. While attacking targets with high antiaircraft firepower or those that have the AA support of multiple other ships will not affect the CV player as much, the issue is more of having the awareness of which ships need to be destroyed and how best to do so. It is important for each strike to have the maximum efficiency as Serov's plane cruise speed is quite slow. It is more important to support the team with well-placed airstrikes on essential targets only than to farm damage off battleships or isolated ships. Serov also has the fastest ship speed for aircraft carriers in its tier, making positioning and repositioning easier. A well positioned player could mitigate the disadvantage of low aircraft speed and the inability to attack a certain time to cause permafires or floods on enemies. Players still need to be careful since the ship has more than 12 km. base detection range. Use of island cover can be helpful.

Attack Aircraft have very small HP pool and slow speed, but the reticle is located further away than most other attack aircraft due to angle of attack. Taking advantage of that, Serov's planes can strike before entering the more powerful close-range AA range of enemies. Captains just need to take note of the large arming distance when emerging from behind islands or using islands as AA cover. The rockets are effective against all classes with high damage, fire chance and penetration of 37 mm. However, the large horizontal dispersion of the rockets need a careful approach on angle of attack for full damage potential. Using islands as cover can be very useful at times to prevent the enemy anticipating the attack and changing course.

The torpedo bombers also have the trait of small HP pool and slow speed, moreover, its torpedo has the lowest damage compared to other carriers in the tier. While the torpedo has a moderate speed of 41 knots and high damage when attacking with a full squadron, it’s recommended to use against targets with low maneuverability and poorer speed to maximize damage potential. Attacking targets from behind islands may not always be useful because of the long torpedo arming distance.

Unique from other carriers at tier VI, Serov has access to skip bombers instead of traditional dive bombers, whose attack pattern differs greatly. The skip bombers attack is similar to torpedo bombers as it’s the most effective to attack from broadside to maximize hit chance. The bomb has more than 32mm penetration, which is able to deal with most ships plating in its tier, and can even penetrate extremities of T8 battleships when up-tiered. Though, it has moderate 6,100 damage per bomb. The damage over time is also a powerful weapon with 35% fire chance per bomb; it is possible to land two or more fires on the same drop. However, the accuracy can occasionally fail even the best-aimed of drops.

Overall, Serov is a strong tier VI CV with high damage output. However, she has a weakness of slow aircraft speed for attacking the same target to apply damage over time. And with only one chance to attack per squadron, a missed attack will be the waste of a good opportunity and a waste of precious time. However, her characteristic of needing only one strike to drop all ordnance makes Serov highly forgiving towards those who are not as adept at target selection and situational awareness.

Experienced players with good target selection, good attack run aiming and good positioning will be rewarded highly, while beginners will at least, to some extent, be able to utilize this ship to contribute to the team. This is a ship with a low skill floor and high skill ceiling, making her able to fit those of all skill levels. She can be fun and comfortable to play in (but not always to play against).

Availability of researchable upgrades for Serov is as follows:

The recommended upgrades for Serov should be focused as much as possible on the torpedo bombers due to them having the largest alpha damage and are as follows:

With Serov low plane speed and HP pool, emphasis should be on skills that boost plane survivability and speed. The first 10 points should be spent on Air Supremacy, Improved Engines, Aircraft Armor (or Survivability Expert if it suits the captain's playstyle) and Enhanced Aircraft Armor to partially mitigate flak. Then, Bomber Flight Control or Proximity Fuse may be taken depending on the captain's preference for skip or torpedo bombers, followed by Sight Stabilization or Demolition Expert (based on captain's preference) and Torpedo Bomber (or Swift Fish if the Aerial Torpedoes Modification 1

upgrade was not mounted). Captains with 21-point commanders can take both Bomber Flight Control and Proximity Fuse instead of Torpedo Bomber or Swift Fish.

The consumables available for the ship and each plane type for Serov are the same as most other T6 CVs and are as follows:

Ships of U.S.S.R.
Aircraft Carriers
Retrieved from "http://wiki.wargaming.net/en/index.php?title=Ship:Serov&oldid=319756"
Categories:
Your location:
To log in, select the region where your account is registered
CIS Europe North America Asia
Or use Microsoft Login to enter WoT XBOX ecosystem
Log in