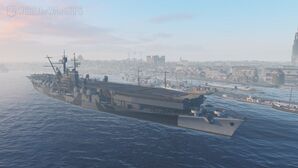 A heavy aircraft carrier project based on the hull of an H-class battleship. A large, well-armored ship.

Despite sharing an almost identical hull with Manfred von Richthofen, Tier X Max Immelmann is anything but similar to her tech tree counterpart. Instead of a focus on high alpha-damage strikes, Immelmann's toolkit trades ability to deal with destroyers for a damage-over-time farming play style consisting of floods applied by torpedo bombers and fires applied by skip bombers. Despite having weak plane HP comparable to Tier IX aircraft, skilled players will be able to use the torpedo bombers' heal consumable and the skip bombers’ long attack distance to remain a threat even when enemy teams group up for AA.

Immelmann’s torpedo bombers share far more similarities with Graf Zeppelin than those of the German tech tree carriers with an identical 35 knot base speed and 5 second arming time. While Immelmann’s torpedoes have slightly less alpha damage, she carries four planes rather than three in her attacking flight in a wider reticule, making their ideal target battleships or cruisers that cannot afford to maneuver much. Fortunately, these torpedo bombers also have very generous converging times for adjustments during the attack animations, though captains should still start attacks early to minimize the need to do this.

While Immelmann’s torpedoes are quite effective, she truly shines in her skip bombers. This unique armament type is like a hybrid combination of torpedo bombers and traditional dive bombers: they approach from a ship’s broadside for maximum effectiveness, but have a payload of HE bombs. They also come with an equally unique reticule that consists of three lines, each shorter than the last to represent the tighter spread on successive bounces. The distance of the bounces is roughly dependent on plane speed, and the bombs will not bounce if launched from too high of an altitude as a result of flying over islands (indicated by an orange line). With boost active, it is possible to bounce bombs from as far as a little over 4km away, meaning attacks into dense AA are still possible as minimal time is spent in mid-range AA and close-range AA is practically skipped entirely. In fact, if the attack animation is skipped, it is possible to immediately turn around and avoid tagging a target’s catapult fighter for a second strike! However, if the length of the line is not properly lined up with the target, the effectiveness of the skip bombers drops off rapidly. Therefore, they are best used against battleships and cruisers, which they can easily deal great damage to with 68mm of pen and high base fire chance, though captains should always watch out for an opportunity on a destroyer that cannot afford to maneuver much or does not seem to be paying much attention.

At 14.0 km base, Immelmann is tied with Richthofen for best in class surface concealment. With camouflage, Hidden Menace, and Concealment Modification 1, Immelmann can lower this number to as low as 10.4km, rivaling that of Audacious's Unique Upgrade without suffering from the downsides of Hidden Menace as much. However, commanders should be wary of their air detection, which will always be a little higher than their surface concealment. Combined with a reasonable 32.0 knots of speed, Immelmann built for concealment can put out unmatched pressure on targets with her high plane speed.

With these strengths in mind, captains searching for a fast-paced play style with an emphasis on striking larger surface ships will feel right at home in Immelmann.

As a Tier X and a premium ship, Max Immelmann has no module upgrades to research.

The recommended upgrades for Max Immelmann are:

Slot 3 has few good options, as the extra torpedo bomber attack time is infrequently needed and the extra torpedo speed does little due to the fact that torpedo arming distance increases with it. Although also situational, Secondary Battery Modification 1 is the least useless of these options, as Max Immelmann's secondaries have a respectable damage output.

After investing in Air Supremacy, Improved Engines, Aircraft Armor, and Survivability Expert for the first 9 points, Max Immelmann captains should take Torpedo Bomber and Repair Specialist to bolster the torpedo bomber squadron. After this, Proximity Fuze and Bomber Flight Control are great options to further improve damage output, but Search and Destroy, Enhanced Reactions, and Interceptor are also great skills that will significantly improve the patrol fighters. In particular, the latter skills are useful in Ranked and Clan Battles, where mitigating the enemy aircraft carrier’s damage is often vital for victory.

As a premium ship, Max Immelmann comes with permanent Type XX camouflage that lowers her detection radius, reduces the accuracy of incoming shells, reduces her service cost, and increases the amount of experience she earns.

Ships of Germany
Aircraft Carriers
Retrieved from "http://wiki.wargaming.net/en/index.php?title=Ship:Max_Immelmann&oldid=314231"
Categories:
Your location:
To log in, select the region where your account is registered
CIS Europe North America Asia Republic of Korea
Or use Microsoft Login to enter WoT XBOX ecosystem
Log in