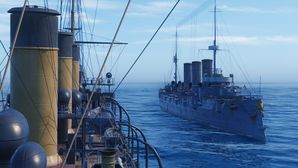 The best protected cruiser of its time in the Russian Navy. This ship was based on a project that was notable for its overall well-balanced features and good protection of the ship's numerous main guns, some of which were mounted in turrets. During World War I, the ship was re-armed with more advanced artillery.

Bogatyr is a decent cruiser for her tier. She has solid armor and maneuverability, with a particular focus on the main battery guns.

Bogatyr can pack more main guns than any other Tier III ship: sixteen (16) in fact, two more than American counterpart St. Louis. She can also shoot further than any other Tier III cruiser. It is important to note, however, that the hang time for the shells is long, and that they fire on a high arc (both good and bad). The turret traverse is painfully slow even for her broadside mounts that don't have far to swivel.

Researching and equipping the 130mm guns is a nominal downgrade. Despite higher fire chance per shell and quicker turret traverse, the individual shells do less damage and have less penetration. The 130mm guns do benefit from the Basic Firing Training commander skill, however, and make a Bogatyr that sets up in this fashion an excellent destroyer hunter-killer. The 130mm guns also come with improvements in dispersion and an increase to shell velocity, which increases the overall accuracy of the guns.

The recommended upgrades for Bogatyr are as follows:

The below skill recommendations are for Bogatyr’s stock 152mm guns.

Bogatyr can equip the following consumables:

In 1898 the Imperial Russian navy sent out a request to acquire new Protected cruisers for its Pacific Fleet. Of all the competing designs, the Russian Naval Ministry found the project offered by the German company, Vulkan, to be the best. By 1899, the plans for the protected cruiser were purchased and distributed to the various shipyards in charge of constructing the 4 cruisers of the Bogatyr-class.

Bogatyr-class ships were of the three-funnel, two-mast design (fore and main), with small, but pronounced poop and forecastle at the edges of the deck. The enclosed two-gun turrets were found on the elevated decks; providing better clearance and a greater arc-of-fire. The rest of the main artillery was placed in single-mounts with a blast shield along the broadsides of the main deck and in casemates along the main and aft superstructure. Armament of choice were the venerable 152mm Canet guns; the largest salvo of any Russian cruiser at the time, with 12 guns.

Russian engineers successfully modified the planned power plant and managed to increase the top-speed to 24 knots; very fast for its time. As well, upon her completion, the class could boast to have the thickest armour of any protected cruisers in the Navy, with an armour deck that sloped to the sides and ends; thickest sections being 70mm.

Bogatyr (Russian: Богаты́рь, Lit. "Hercules") was the lead ship of the class, and the only one built in foreign hands being laid down at the Vulkan Shipyards on 22 December 1899, being launched 30 July 1901, and commissioned into the Baltic Fleet on 20 August 1902.

Ships of U.S.S.R.
Cruisers
Retrieved from "http://wiki.wargaming.net/en/index.php?title=Ship:Bogatyr&oldid=319744"
Categories:
Your location:
To log in, select the region where your account is registered
CIS Europe North America Asia
Or use Microsoft Login to enter WoT XBOX ecosystem
Log in