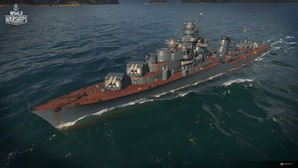 The most advanced Soviet destroyer among those designed before 1941 (Project 35). Udaloi was large in size and could run at a very high speed for this type of ship. In terms of the power of her main guns, she outclassed most of her foreign counterparts.

What can be described as an Ognevoi, Kiev, and Tashkent combined, Udaloi is a fairly newer shift in Russian destroyer ergonomics. Sporting dual mounts in the same AB-X layout as Tashkent this destroyer leans on her guns than her torpedoes. Udaloi can kite ships that have a hard time leading her due to her fast speed. She can be an effective counter to other Tier IX destroyers in close range encounters and excels in medium-to-long range gunnery duels.

However, she is not without her drawbacks. Similar to her Russian predecessors her torpedo speed leaves something to be desired and the detection rating of the ship itself is quite poor for a destroyer. Her maneuverability is also lacking, but this can be compensated for with the appropriate upgrades (see below).

As a tech-tree ship, Udaloi has to research a second hull, improved fire control directors, and improved torpedo armament. Prioritize the second hull upgrade first (this increases the tubes of the torpedo launchers from 3 to 5, just like Ognevoi), followed by the improved fire control. Torpedo armament upgrades should be last, as Udaloi is primarily a gunboat, and usage of her torpedoes is situational.

The recommended upgrades for Udaloi are as follows:

) signal equipped are encouraged to replace the Propulsion Modification 1 upgrade, as it extends the Engine Boost

consumable duration by 50%, thereby allowing Udaloi to maintain a max speed of 45.4 knots for three minutes.

Udaloi can equip the following consumables:

) to decrease reload time of consumables, and Sierra Mike (

) to increase chance of causing flooding and Juliet Charlie (

) to mitigate risk to magazine detonation from mounting the former flag. If captains wish to buff their primary artillery, they are encouraged to mount Victor Lima (

Ships of U.S.S.R.
Destroyers
Retrieved from "http://wiki.wargaming.net/en/index.php?title=Ship:Udaloi&oldid=319699"
Categories:
Your location:
To log in, select the region where your account is registered
CIS Europe North America Asia
Or use Microsoft Login to enter WoT XBOX ecosystem
Log in