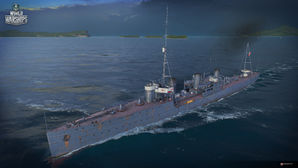 Developed from the legendary Novik-class destroyers, Izyaslav was one of the largest and most powerful destroyers in the Russian Navy. Compared with her predecessors, she was armed with more powerful artillery. Izyaslav was surpassed in torpedo caliber by foreign-built destroyers of her time, which was partly compensated by the number of torpedoes that could be launched in a broadside salvo.

Compared to its predecessors, Izyaslav is the first ship to introduce players to the gunboat playstyle the Russian destroyers are known for. While the torpedoes are substandard, the guns are quite impressive. While their low caliber 102mm cannons may not seem imposing, they are more than capable of causing substantial damage to the targeted ship. Generally, most players will ignore Izyaslav, disregarding it because of its slow, short ranged, and low damage per torpedoes. The 102's high rate of fire and decent fire chance allow Izyaslav to constantly cause damage (while mostly low rolls because of the low caliber of the main battery, the high rate of fire makes up for it) and generally be an annoyance to it target.

With proper skill and maneuvering, Izyaslav is capable of soloing battleships like Kongo. Bottom line: Izyaslav is a solid gunboat that, with some skill, can perform a wide variety of battlefield roles with its versatility.

The recommended upgrades for Izyaslav are as follows:

The Izyaslav class (Russian: Изяслав) were a class of destroyers built for the Baltic Fleet of the Imperial Russian Navy. They were modified versions of the Orfey class built in Russia with the assistance of the French Company Augustin Normand. These ships fought in World War I, Russian Civil War, Estonian War of Independence, and World War II.

Ships of U.S.S.R.
Destroyers
Retrieved from "http://wiki.wargaming.net/en/index.php?title=Ship:Izyaslav&oldid=322888"
Categories:
Your location:
To log in, select the region where your account is registered
CIS Europe North America Asia
Or use Microsoft Login to enter WoT XBOX ecosystem
Log in