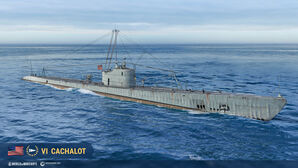 A relatively medium-sized submarine by U.S. Navy standards, Cachalot exerted considerable influence on the development of this type of boat in the U.S. Navy, becoming the predecessor of the "fleet submarines" that would come later.

Cachalot plays like a mobile torpedo platform. With low health and the potential for high damage, she is a glass cannon on the battlefield. The torpedo range is similar to Japanese destroyers at the tier, but the speed is higher than any other ship. On the surface your detection is fairly low but not the lowest, and submerged it goes lower, but with a timer counting down always. The best way to describe how she plays is like a torpedo destroyer who instead of a smoke screen gets the ability to duck underwater and get away that way.

One of the hardest parts to understand about the ship is she cannot stay underwater forever, and being spotted causes the oxygen to count down at double the speed of normal. The ship plays at 3 depths: surface, periscope, and maximum. On the surface and at periscope you get normal torpedo tracking to targets, but at any other depth that all goes away. Pay attention when performing anti-submarine warfare to if they have an X next to their ship letting you know you can't hit them at your current depth. This also holds true when trying to torpedo a surface ship from deep underwater. Pings are incredibly helpful for ensuring torpedoes hit. They can also be used for scouting purposes when players hide in smoke. The best targets to go after are the enemy battleships and other submarines, to protect yours. Pinging a carrier is almost a waste of time due to the damage control negating all pings when active against the ship. Due to her slow speed compared to other ship types, it's easy to get into trouble and hard to get out of it. Open water is your friend due to a lack of guns, and priority should go to fighting ships in it. Your torpedoes track on the minimap for you, so it's best to fire them and let them get about halfway to the target when sniping before pinging them. Beware destroyers getting too close, but do not be totally afraid. Your torpedoes have a short arming distance and if they run a depth charge battery on you and you can live through it and sail parallel to them you can get a good shot off on them with aft torpedoes without worrying about them dodging it easily.

The ship is very rewarding to players who can master torpedo sniping and stay undetected for a majority of the match, while also having the ability to get in close and hit other ships hard before disappearing down deep and reappearing in other locations.

Availability of researchable upgrades for Cachalot is as follows:

Ships of U.S.A.
Submarines
Retrieved from "http://wiki.wargaming.net/en/index.php?title=Ship:Cachalot&oldid=325481"
Categories:
Your location:
To log in, select the region where your account is registered
CIS Europe North America Asia
Or use Microsoft Login to enter WoT XBOX ecosystem
Log in