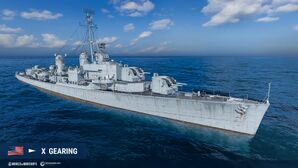 Developed from the Fletcher class, Gearing was the largest destroyer built by the U.S. Navy during World War II. The ship was superior in firepower to all foreign counterparts, owing to new dual-purpose twin mounts with a very high rate of fire. Numerous automatic AA guns ensured a respective level of efficiency for her AA defenses.

As the Tier X American destroyer, Gearing represents the ultimate embodiment of the jack-of-all-trades destroyer in World of Warships.

Like all American destroyers, the primary focus is her main battery guns. Gearing is built around the same style of dual barrel 127mm turrets that form the main battery of Atlanta and Flint, as well as the secondary batteries of North Carolina, Iowa, and Montana. Gearing packs three such turrets, with a stock reload speed of 3.0 seconds. Although she cannot out-trade dedicated gunboats, Gearing’s main battery DPM affords her a powerful self-defense and deterrent against other destroyers, in addition to a tool for farming battleships that push into Gearing’s (albeit limited) range. American captains can expect the same limited range and long shell flight times that are the characteristic of other ships of the nation.

Gearing has a choice of torpedoes. Captains who are comfortable using Fletcher;s Mark 16 mod. 1 torpedoes can continue to do so, while the Mark 17's are the among the longest-legged fish in the game, clocking in at a 16.5 km range. Captains are unlikely to land many hits at that distance, but it gives Gearing the ability to threaten enemy ships from well beyond the range of her main battery. The Mark 17's are equally as difficult for opposing ships to spot as the Mark 16's, despite doing slightly less damage and sporting a longer reload. Gearing’s access to Upgrade Slot 6 gives her the same choice Fletcher has between a couple of Main Battery Builds or a Torpedo Build when customizing her upgrades and commander skills.

Like Fletcher, Gearing can equip the Defensive AA Fire

consumable, which helps shore up the traditional destroyer weakness to enemy air strikes. Unfortunately, she shares this slot with her Engine Boost

, meaning that captains wishing to build for anti-aircraft capability will have to consider relegating her to her unimpressive base top speed. Her anti-aircraft suite is otherwise unremarkable. Veteran American destroyer captains will also notice that Gearing handles differently than Benson and Fletcher; she's slightly slower to respond to rudder commands and has a noticeably larger turning radius. This makes her more challenging to handle in tight quarters or when dodging torpedoes. Captains should allow for some adjustment time in learning how Gearing handles differently before intentionally putting her into situations where precision handling is expected.

One notable curiosity about her armor scheme: Gearing sports an area of 21mm armor around her midsection, up from the 19 mm typical of destroyers of her tier. This is sufficient to shatter enemy high-explosive shells lower than 126mm in caliber. However, given that most of the destroyers Gearing will face will penetrate 21mm with their high-explosive, this plating no longer affords Gearing meaningful protection against destroyer HE. The combination of this plating as well as the wide beam of the ship also allows most destroyer-caliber main battery armor-piercing ammunition to arm within the ship as opposed to clean over=penetrations.

Despite having below average top speed for her tier, Gearing can adapt to changing battlefield situations in ways capable of making captains of other destroyers jealous.

Availability of researchable upgrades for Gearing is as follows:

Similar to Benson and Fletcher, Gearing can be tailored to maximize either her torpedo armament or main battery guns. Most players will opt to maximize the damage output of her main battery given that this is already her strongest armament.

The recommended upgrades for Gearing are fairly obvious choices, and largely self-explanatory:

), may opt to install it as well. It offers greater concealment bonuses than Concealment System Modification 1

, but also decreases the reload speed of main guns, shifting the ship more towards the usage of stealth and torpedoes. It does not exclude the relevant choice in Slot 6 though, so the negative effects can be offset by the upgrade chosen for that slot.

The upgrade chosen for Slot 6 will largely determine how Gearing plays.

Main Battery (Maximum Rate of Fire) Build: One popular build for Gearing captains is to stack buffs to her main battery rate of fire. From an upgrade perspective, this means plugging Main Battery Modification 3

into the final upgrade slot; when paired with Level 3 commander skill Basic Firing Training, it drops her reload speed to a mind-numbing 2.4 seconds.

Torpedo Build: A less popular — but no less potent — Gearing build is to buff her torpedo reload time by stacking Torpedo Tubes Modification 2

Gearing can equip the following consumables:

is not recommended over Engine Boost

due to the ship's mediocre AA.

) is an excellent way to help make up for her slow top speed. November Foxtrot (

) signals to increase the fire chance of her main battery shells.

Ships of U.S.A.
Destroyers
Retrieved from "http://wiki.wargaming.net/en/index.php?title=Ship:Gearing&oldid=318873"
Categories:
Your location:
To log in, select the region where your account is registered
CIS Europe North America Asia
Or use Microsoft Login to enter WoT XBOX ecosystem
Log in