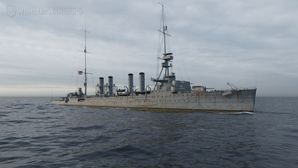 Tier V Omaha represents an incremental improvement over her predecessor, Phoenix. She inherits Phoenix's unusual mixture of casemate and turret-mounted main armament, allowing a broadside of eight 6-inch (152 mm) guns or six guns fore and aft. The casemate guns have very good angles of fire and at least six guns can be brought to bear in any direction. This is useful when pursuing a target or retreating, allowing Omaha to maintain most of her firepower without giving a broadside.

Omaha is also the last torpedo-armed cruiser in the American line. Unfortunately, the torpedoes on all hulls have a paltry 5.5 km range (unlike her Soviet Lend-Lease counterpart, Murmansk, which has 8 km torpedoes), and should be used only when the guns cannot do enough damage (from either damage saturation for HE or insufficient penetration for AP) or Omaha finds herself very close to another ship. The good news is that if a torpedo salvo hits, it will do massive amounts of damage. They become very useful when ambushing in close quarters. With the removal of the C hull(an older version of it can be found on Marblehead ) players now find themselves in a good and bad place, the bad news is that they cannot boost their AA as well as before but the good news is now they can grind faster and focus on playing against ships more.

Befitting her status as a light cruiser, the armor fitted on Omaha is fairly weak. She relies mainly on speed to avoid damage from other ships, and dodging shells and torpedoes is key to surviving. Her quick rudder shift provides her captain the ability to make her a difficult target to hit, and he must maximize use of her rudder to avoid being blown away by enemy battleships. Omaha also has a rather large and vulnerable citadel; giving a broadside to battleships, cruisers, or even destroyers will result in the ship taking massive amounts of damage, if not being destroyed in a single salvo.

As a teammate, Omaha is the perfect escort for battleships. She provides decent AA cover, extra firepower, and Hydroacoustic Search

to see where torpedoes are coming from far in advance. Omaha also excels at chasing down and killing destroyers thanks to her high speed and unusual armament layout. Her added firepower can be a useful supplement in supporting allied destroyers.

Early experience gains are best invested in Hull (B) — providing significant upgrade to Omaha’s firepower — followed quickly by the improved 152mm guns. Boost her firing range next by picking up the Fire Control System upgrade, then unlock Hull (C). Investing the credits to equip Hull (C) is the captain's choice: it sacrifices two of her torpedo launchers for additional anti-aircraft defenses and is a downgrade to her overall firepower. For the purposes of unlocking Dallas, sticking with Hull (B) is probably best.

Ships of U.S.A.
Cruisers
Retrieved from "http://wiki.wargaming.net/en/index.php?title=Ship:Omaha&oldid=317273"
Categories:
Your location:
To log in, select the region where your account is registered
CIS Europe North America Asia
Or use Microsoft Login to enter WoT XBOX ecosystem
Log in