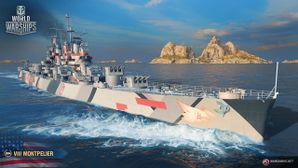 Brave and energetic like her elder sister, Cleveland. Loves battles and stands up to even the strongest of foes, but is clumsy at everything other than combat. Member of Task Force 18 — a group assembled of ships of her type. Admires her sister, Cleveland. From the game Azur Lane.

AL Montpelier was first released for sale worldwide on 1 May 2019.

AL Montpelier is essentially a clone of Tier VIII American tech tree cruiser Cleveland, with only a couple of minor changes.

For starters, AL Montpelier has a few hundred more hit points than Cleveland; six hundred more, to be precise. It's a small buff that most players won't notice. Hidden from view, her guns have been made more accurate than those of her tech tree sister by improving her sigma value from 2.0 to 2.15, meaning that shells will cluster more closely together towards the center of her dispersion ellipse. Lastly, as compensation for the improved accuracy of her guns, she reloads half a second slower than Cleveland.

In all other respects, AL Montpelier is a Cleveland. Her AA battery, concealment, top speed, turning radius, and armor layout are all the same. AL Montpelier is a solid support ship, but captains will have to stay frosty and play smart to avoid the nastier battleship opponents that she will face within her tier bracket.

As a premium ship, AL Montpelier has no module upgrades to research.

The recommended upgrades for AL Montpelier are as follows:

for Slot 3 to increase her medium- and long-range AA power. Although her AA is a powerful enough deterrent, the usefulness of this investment depends on whether or not there is a carrier in the game. This build is great in a division with a Tier VIII carrier to ensure that AL Montpelier will have a purpose for her AA suite.

As a premium ship, AL Montpelier comes with Default permanent camouflage and a set of permanent combat bonuses.

) flags should be mounted to improve the ship's survivability. November Echo Setteseven (

) flags can also be mounted to increase the ship's anti-aircraft damage.

Ships of U.S.A.
Cruisers
Retrieved from "http://wiki.wargaming.net/en/index.php?title=Ship:AL_Montpelier&oldid=321136"
Categories:
Your location:
To log in, select the region where your account is registered
CIS Europe North America Asia
Or use Microsoft Login to enter WoT XBOX ecosystem
Log in