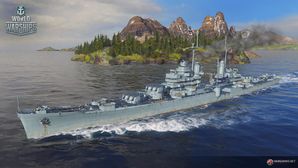 One of the first versions of a U.S. Navy light cruiser with a dual-purpose 152 mm artillery as the main battery. Further development of the project led to the creation of Worcester-class cruisers.

Some aspects of Tier IX's Seattle will feel like a downgrade for players who took the time to play through Cleveland at Tier VIII. Seattle is notably longer and bulkier, trading Cleveland’s compact hull and svelte handling for a hull form and layout that has much more in common with her heavy cruiser counterpart Buffalo. Indeed, if placed side-by-side with Buffalo, captains will notice many similarities (such as her amidships aircraft catapults) and a couple of glaring changes.

One of the most notable differences between Cleveland and Seattle is the loss of the former's 5"/38 dual-purpose secondary turrets. These venerable guns — found in a myriad of places across American ships of all classes — that comprised the long-range anti-aircraft battery at Tier VIII have been replaced by Seattle’s 152mm/47 Mark 17 dual-purpose main battery at Tier IX. It's an awkward trade, but it ends up working out slightly in Seattle’s favor, as her outer AA bubble picks up an extra kilometer of range while the DPS is basically a wash. Seattle’s mid-range AA bubble is notably more powerful, though, as she packs a dozen quad 40mm Bofors mounts; her AA DPS at mid-range is 50% higher than that of Cleveland.

Seattle’s main battery guns themselves are also something of a mixed bag. The ship can equip Main Battery Modification 3

and lower her reload time to 5.7 seconds, but the traverse speed of her turrets is already slower than that of Cleveland and the aforementioned upgrade makes it even worse. Captains who invest in the Expert Marksman skill can recoup most of this lost traverse speed, but will still find themselves frustrated with how slow her turrets move for a light cruiser. The shell performance of Seattle’s guns remains identical to the American light cruisers before and after her, and she retains the lightly armored citadel of her light cruiser brethren. Seattle’s armor belt — such as it is — is longer than that of Cleveland and extends across more of her waterline, but tops out at 102mm (25mm thinner than that of her predecessor). She is decidedly less well-protected.

From a handling perspective, Seattle both an improvement and a downgrade from Cleveland. She's faster by about a half-knot, but responds to her rudder slower and has a notably larger turning circle. Captains who have grown accustomed to navigating the tight confines of certain maps with Cleveland are advised to spend some time learning how Seattle handles prior to attempting the same kinds of maneuvers. Like all other Tier IX cruisers, she gains access to the Repair Party

consumable, which greatly increases her longevity in the hands of a heads-up captain.

Appraised of all these nuanced differences, captains are advised to treat Seattle as a slightly larger, slower handling, and harder-to-conceal Cleveland. Most of the tactics and strategy used to work through Cleveland will still apply to Seattle; maximize use of them and move on towards Worcester.

Availability of researchable upgrades for Seattle are as follows:

The recommended upgrades for Seattle are as follows:

Players who wish to spend doubloons can equip Seattle with Type 19 camouflage that lowers her detection radius, reduces the accuracy of incoming shells, reduces her repair costs, and increases the amount of experience she earns.

Ships of U.S.A.
Cruisers
Retrieved from "http://wiki.wargaming.net/en/index.php?title=Ship:Seattle&oldid=311655"
Categories:
Your location:
To log in, select the region where your account is registered
CIS Europe North America Asia Republic of Korea
Or use Microsoft Login to enter WoT XBOX ecosystem
Log in